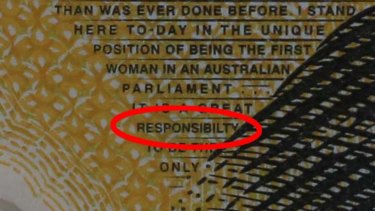 The fine print on the botched $50 note.Credit:

At least Edith had her back to the problem, blind to the clumsiness of men. I say men, but who knows the real culprit? Nobody at the Royal Australian Mint has claimed personal responsibility – or make that "responsibilty", as that was the gaffe in a nutshell.

Under pressure, responsibility can be tough to spell. Even more on a screen, with autocorrect set to pounce.

The slip occurred in a microtext block on our latest batch of $50 notes, a minuscule transcript of Edith Cowan's maiden speech to Parliament. Squint through a lens and you'll read the words at Edith's nape: "It is a great responsibilty [sic] to be the only woman here…"

Yes, that third i was blind to the mint's scribe, the error being printed 46 million times, converting our newest $50 stockpile into a laughing stock.

One false stroke and our pineapple became a lemon.

One false stroke and our pineapple became a lemon, triggering a refrain of tut-tuts over the wires. Yet that derision can be risky practice, as typos typify everyday life.

Still on currency, a Chilean coin in 2010 fluffed its own nation. Instead of REPUBLICA DE CHILE edging the peso, the Santiago mint managed REPUBLICA DE CHIIE. See the difference? General Bernardo O'Higgins could, the forlorn liberator obliged to stare at the bungle for the rest of his gilt days.

Only last week, Queen Elizabeth's portal declared the birth of Archie Harrison Mountbatten-Windsor. "He is the first child of The Duke and Duchess of Cambridge and seventh in line to the throne." Try telling that to Prince George of Cambridge, now five, or four-year-old Charlotte.

Of course, Cambridge should have been Sussex in the message, a mismatch of duchies that Windsor elves repaired in short order.

No harm done. Not really. Unlike the costly typos of yore, where one Japanese firm shed $340 million in a Tokyo heartbeat, back in 2005, due to their generous sale of 610,000 shares for one yen, rather than vice versa. Or Mariner 1, a NASA probe aimed for Venus in 1962, imploding beyond the ozone due to a renegade hyphen in its code.

What's black and white and red all over? A Penguin editor, back in 2010, the same wretch responsible for green-lighting a recipe in The Pasta Bible that happened to include the step of adding "salt and freshly ground black people" to your tagliatelle. Add a sprig of garnish and proceed to pulp.

Speaking of bibles, the real McCoy was implicated in 1631. Dubbed the Wicked Bible, the Barker and Lucas edition itemised the commandments perfectly, excepting one, namely number 7, demanding "Thou shalt commit adultery."

Like manna from heaven, believers could go about their daily lives, obeying an omission from God.

From dud notes to fateful rockets, the curse is known as Muphry's Law, an ageless canon stating that when you write to criticise editing or proofing then your comments are bound to contain a typo or grammatical error. Goes to show where all human.

So beware when sniping at French widows on real estate placards, or the bakery's glutton-free muffins. Double-check your tirade when reporting cases of fresh avocado's, or ultra-violent light, or car park signs announcing exciting ramps.

Because what goes around comes around, just like those high-energy particles in Switzerland's hardon collider. And if you don't believe me, I'll bet you $50.

Larry McMurtry, Novelist of the American West, Dies at 84