Home » Books » The right type for a murderous spree

Nick Gadd’s second novel, Death of a Typographer, begins with a dead man sprawled out in the shape of an X, ‘‘as if the limbs had been placed there by someone who appreciated typography’’.

The body is of Tom Cremington, a printer who has done odd jobs for the narrator, Martin Kern. By this very stylised opening, by the characters’ playful surnames, and by the fact that each chapter’s headline is written in a different font, the reader can already tell this will be a romp of a book, both sprightly and erudite. 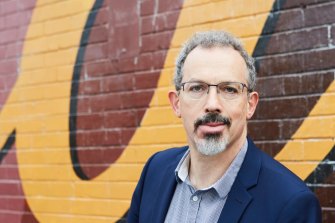 Nick Gadd’s second novel, Death of a Typographer, is both a celebration and a gentle satire of typography.Credit:

With in-jokes scattered joyfully about, it’s easy to be drawn into its ‘‘typomania’’ and Gadd delivers a novel that combines detective mystery and letterform aesthetics.

‘‘My first novel, Ghostlines, was a crime/mystery/literary novel,’’ says Gadd. ‘‘This one is also a fusion: it’s a literary, comic and crime book.’’ On a sabbatical from his job in the communications department at the Law Reform Commission, he demurs when asked whether, like Martin, he’s a typomaniac.

‘‘No, it’s my friendship with Stephen Banham, a Melbourne typographer (who also designed the cover and internal pages) that sparked the initial interest. I’m certainly not an expert in fonts … I just know enough about type to write about it imaginatively,’’ he says. 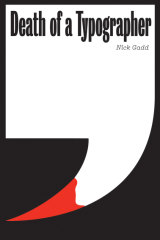 Gadd’s protagonist is Martin, a graphic design nerd whose typographical knowledge assists police by identifying perpetrators through their use of ransom notes and computer fonts. Martin realises that Cremmo’s death is a type crime as he picks up a telltale printing clue. Soon, with more deaths occurring, it’s clear that there’s a typo killer on the loose, and with the help of journalist Lucy Tan, and another ‘‘typeshoe’’ – a private investigator whose specialty is font crimes – Martin follows the trail of lettering obsessives.

Interwoven in the plot is the enigmatic Pieter van Floogstraten, a Dutch typographical genius who disappeared at the crest of his fame but who’s creating a secret new typeface, with each letter released in random places around the world ‘‘like some crazy Scrabble player’’.

Fonts matter, each one has its own meaning, Gadd emphasises. We both scrutinise the font on the takeaway coffee cup he is holding. ‘‘See the type here, it’s classy and elegant with its little serifs. That’s what the cafe is trying to say about itself. But if you have a look at the pharmacy nearby, it uses a kind of stencil font, which just says cheap and no-nonsense. The world of type is so rich and fascinating with its own vibrant language.

‘‘My novel about obsessive eccentrics is fictional but there are even stranger people than Floogstraten out there. I didn’t use him in my book, but there’s a guy who travels the world photographing butterflies that have letters of the alphabet on their wings for instance, so someone trying to do the perfect font and hiding it around the world isn’t that strange …”

Set primarily in Melbourne with excursions to various overseas destinations including a Tibetan monastery, the Peruvian plains, and across Nepalese backstreets, Gadd’s novel is both a celebration and a gentle satire of typography.

Martin is a fusspot who actively avoids places with terrible signage because they do damage both to his mental and physical health. Along the way the book mocks ‘‘branding and identity consultancy’’ as signified by Martin’s arch rival, who designs Modernist corporate fonts.

The typographical gags are a delight to discover. There’s a bar called The Printer’s Arms that serves a Palatino cocktail; a horse named Running Cursive, and a child named Pica. Also, who knew that the dots over I’s are called tittles?

As for Gadd’s favourite font? It’s Garamond (he likes the classic design) but he’s also fond of Mercury – the typeface used in the book. His next book will be non-fiction: ‘‘I have a blog called Melbourne circle, which is about walking around looking at old buildings and signage and writing a little bit about its history. There will be hand drawn maps.’’

We both grin and agree that typography will make way for cartography.

Death of a Typographer is published by Australian Scholarly Publishing at $34.99.

Game of Thrones end: Did horrifying Book 2 scene reveal Varys KNEW how he would die?

‘Hotbox’ Is the ‘Kitchen Confidential’ of the Big-Ticket Catering World

WHAT BOOK would writer Marian Keyes take to a desert island?