Home » Books » The many layers of Alex Landragin’s imaginative fiction

One of the many pleasures of fiction is the intricate unfurling of the world – or worlds – contained within a book’s pages. The places where characters live may be imaginary or real, the minor characters might be drawn from life and based on those the novelist either loves or loathes. 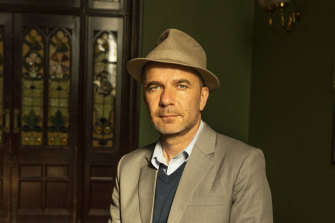 The list of books within books and stories within stories is a surprisingly hefty one and Paris-based, Australian-born bookbinder, Alex Landragin, adds to it with this absorbing evocation of distinct historical periods and star-crossed lovers shot through with existential and philosophical modes of storytelling. 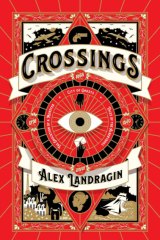 But to cross is no easy feat. For a crossing to occur both participants must stare deeply into one another’s eyes, never blinking or turning away, until they are filled with what Landragin likens to ‘‘… a frothy feeling of joy’’. With that joy, however, comes the potential for dark despair when crossings are done without the knowledge and consent of one of the ‘‘crossers’’. He, or she, is labelled ‘‘blind’’ and, in some cases, shunned.

This wily, complex, largely fascinating novel opens with a confession that later also feels like a potential taunt: ‘‘I didn’t write this book. I stole it.’’ The reader is immediately thrust into the narrative, pondering the identity of this supposed narrator? Is he an honest man or a petty thief? Does he appear trustworthy or is his brain merely a repository of dark secrets and stories? And what of the fictional figure of the Baroness?

Suffused with myriad incarnations of the mystical and spiritual, as well as the grimy and gritty, Crossings achieves its metafictional literary goals and then some, offering up an excursion through time, human existence, philosophy, psychology, poetry, history and literature.

At the core of this book are the three short literary works that combine all these themes and act as the strange catalyst for the narrative’s many, and convincing, richly rewarding tales.

The Education of a Monster is a letter written by the French poet Charles Baudelaire to an illiterate young girl; City of Ghosts is a noir romance set in 1940s Paris as the Germans are invading and the third, Tales of the Albatross, is the strange, dark autobiography of a deathless enchantress. Fascinatingly, Landragin’s novel is dedicated to a largely unknown Baroness whose back-story, like much of Crossings, is a puzzle of sorts that is intriguing but fragmented.

Although Tales of the Albatross is confounding at times, I was mostly dazzled by it. It’s interesting to note that Crossings is obviously interested in engaging the reader and, to that end, it is up to each reader to choose which of the three divergent narrative paths they choose to follow – the epistolary, the romantic or the autobiographical?

As many will remember, the Choose Your Own Adventure series of books, which enabled young readers to fundamentally alter the course of the story by giving them a numbered list of potential narrative devices and life-based scenarios to choose from, read today like the childhood precursor to unabashedly metafictional novels such as Mark Z. Danielewski’s The House of Leaves, Sheila Heti’s What Is A Person? or Ali Smith’s How To Be Both.

Like the literary embodiment of a set of brightly painted Russian matryoshka nesting dolls, Landragin has succeeded in writing a multilayered work of speculative fiction that, at its best, had me thinking of David Mitchell’s experimental and engrossing Cloud Atlas.
Just as the dolls fit into one another, Crossings all makes sense at the end, neatly and satisfactorily resolving its multiple narrative threads and possibilities with grace, attention to detail and emotional acuity. No matter which narrative path a reader takes, there is no sense of confusion or dissatisfaction, just a little sadness at having to farewell such a fine book.

Alma Mahler: a story of tragedy, husbands and music