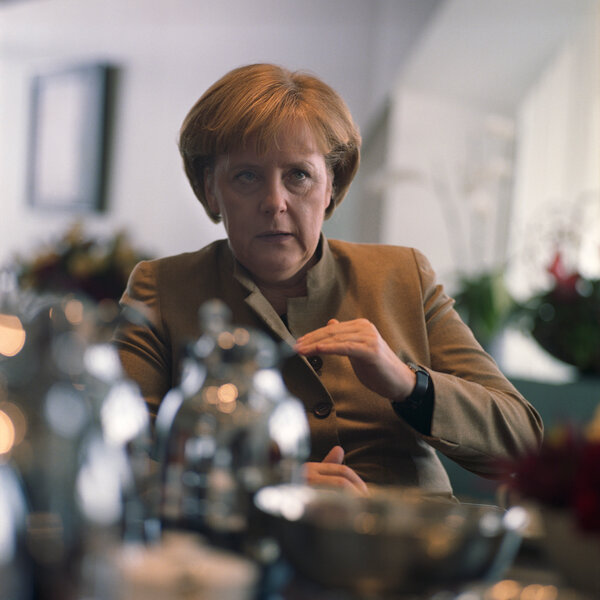 The Remarkable Odyssey of Angela Merkel
By Kati Marton

In 1852, Richard Wagner sent a lengthy letter to Franz Liszt about the sorceress Ortrud in his opera “Lohengrin.” He declared that she never experiences love because “politics are her essence. A political man is repulsive, but a political woman is horrible. This horror I had to represent. … In history there are no more cruel phenomena than political women.” Whether Angela Merkel, an avid Wagner fan, is familiar with this vituperative statement is unclear, but its sentiments would hardly come as a surprise to her. After the Christian Democratic chancellor Helmut Kohl plucked her from obscurity to become minister for women and youth in 1991, Merkel soon encountered the longstanding aversion to powerful women in German politics, let alone ones from the former East. The national media routinely referred to “Kohl’s little girl” and mocked her appearance. In the patriarchal Christian Democratic Party itself, a group of promising young men formed a secret pact in the early 1990s to try to impede her. Over a decade later, the Social Democratic chancellor Gerhard Schröder taunted her as “not commanding, pathetic.”

Yet the reserved and taciturn Merkel unerringly won out and served four successive terms as Germany’s first female chancellor, rivaling the tenures of conservative colossi like Konrad Adenauer, the first chancellor of postwar Germany, and Kohl, the father of reunification in 1990. By the time Merkel stepped down, she was the world’s most trusted leader.

How did she do it? In “The Chancellor,” Kati Marton carefully traces Merkel’s journey from the hinterlands of East Germany to the center of power in Berlin. A fluent writer, Marton seeks to unravel the Merkel mystery by penetrating the cordon sanitaire that she has erected around her personal life.

Marton’s biography builds on an authorized one by the German journalist Stefan Kornelius, which appeared in English in 2014. Marton’s ambitious account relies on wide reading in German sources, including interviews Merkel gave from 1990 until she became chancellor in 2005; numerous conversations with Merkel’s mentors, friends and colleagues; and background interviews with several members of her inner circle. She relates how her “own encounters with Merkel, dating from 2001, though not formal interviews,” enhanced her understanding of the chancellor.

Marton, who was married to the late Richard Holbrooke, a former ambassador to Germany, is the author of numerous books, including a widely acclaimed history of her Hungarian parents, “Enemies of the People.” She explains at the outset that her own childhood in Soviet-occupied Hungary helped her to fathom Merkel’s life and career, emphasizing that Merkel’s upbringing in a police state forms the key to her “supreme public reticence” and ability to camouflage her views. The result is a masterpiece of discernment and insight.

Abducted from school by terrorists: why haven't they been rescued?