Home » Books » The Forty Thieves: The Good, The Bad and The Glamorous 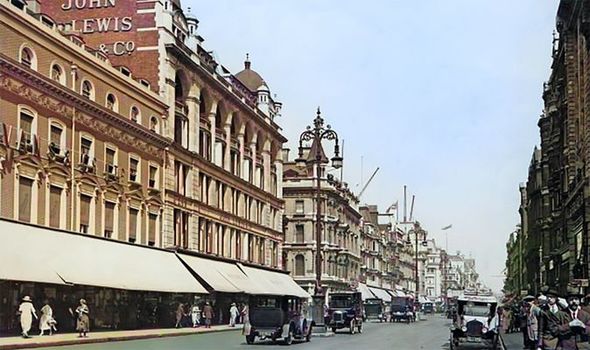 Dressers in striking fur coats and glamorous hats, the women staring from their mugshots in the Police Gazette alongside a veritable rogues’ gallery of hardened male criminals look distinctly out of place. But on closer inspection, there is undoubtedly something steely in their eyes, a hardness that endures nearly 100 years after their arrests.

Gazing insolently into the camera lens, it is far from clear if a spell in Holloway Prison will deter them from their chosen profession.

For these are the faces of the notorious, powerful all-girl gang, the so-called Forty Thieves, which made rich pickings stealing luxury items such as furs, silk stockings and jewellery from the prestigious London stores in the first half of the Twentieth century.

The Forty Thieves dressed the part, presenting themselves as bored, wealthy housewives idly browsing through the shop rails. In fact, they came from some of the worst slums in south London and were a highly organised and sophisticated gang.

Working in teams three or fourstrong, they went “hoisting” – as shoplifting was then known – three times a week, steaming through stores before bundling their loot into taxis and cars kept waiting outside. Under their clothes, they wore specially adapted petticoats with hidden pockets or baggy bloomers with elastic at the knee, called “hoister’s drawers”.

Furs were rolled on the hanger and shoved down their knickers when the shop assistant was distracted. Jewellery and watches were snatched from countertops, swapped for worthless fakes and hidden under their hats or even in their hair.

The gang was so notorious its ringleaders regularly appeared in a secret register of criminals, now kept by the National Archives. This register, and the Police Gazette, existed to help officers apprehend the most persistent and cunning offenders.

But no amount of questioning would ever persuade them to give up the secrets of the gang, for they adhered to a strict code of loyalty to their leader, who was appointed “Queen”.

The record of their crimes reads like a female Peaky Blinders and some of these larger-than-life characters inspired my latest novel Queen Of Thieves, the first in a planned trilogy featuring strong, subversive women.

I felt it was time to reappraise London’s gangland. It was not just a man’s world, despite the countless column inches still spent poring over the phenomenon that was the Kray Twins.

The other side of the story involves these feisty women and it is perhaps more fascinating given the limited powers such workingclass girls had to earn a decent wage.

To be a career thief and a woman was to subvert all the social norms of the time.Their most famous Queen, Alice Diamond, the daughter of a docker, was noted for her row of diamond rings which doubled as a knuckle duster, and, chauffeured in her Bentley, she was rarely seen without a sable coat, or a mink stole slung about her shoulders.

On their home turf, in the slums of the Elephant and Castle and Waterloo, Diamond ruled with such brutality it earned her the respect of Soho crime bosses in the maledominated underworld. Gangsters including “Mad” Frankie Fraser – whose sister Eva was a member of the gang – later spoke with reverence about The Forty Thieves.

Alice Diamond enforced a code of conduct, including never helping a policeman or informing. Members handed everything that was pinched to their Queen, in return for a generous weekly wage.

When the heat was on in London, they went on thieving trips to Southend, Brighton, Liverpool and Manchester. One of their favourite ruses to evade capture was to post their loot back to London or deposit a suitcase full of stolen furs at the railway station’s left luggage office, to be collected later.

In their heyday, from the 1920s to the 1950s, gang members could out-earn men ten-to-one, giving them financial freedom to buy beautiful fur coats and jewellery and go out dancing in West End nightclubs.

They behaved like upper-class debutantes, but their pedigree often involved at least one spell in Holloway jail.

The granddaughter of one of the leading lights of The Forty Thieves, who let me in on the secrets of “hoisting”, told me: “My nan was always beautifully turned out. She and her friends looked like film stars when they went out down the pub.Their view was that shops had insurance so who were they hurting by doing it?

“Many women around south London got to buy beautiful things at a knock-down price when clothes were a luxury item, especially during and after the Second World War.”

Newspaper cuttings from the 1920s and 1930s are full of the exploits of the gang, with Alice

Diamond clearly capturing the imagination of reporters. With her pale gold hair, she cut a “tall and commanding figure with a cool demeanour”. As her legend grew, so did she – literally.

Police records from 1919 have her standing 5ft 9in tall but by the mid-1920s, newspapers have her towering at 6ft in the dock, as the “Giant Queen of The Terrors” while being sentenced for larceny.

When she was caught, she would simply reply: “I don’t know anything about it.”

Her deputy, the flame-haired, hot-tempered Maggie Hughes, was the perfect counterpoint, protesting loudly while being sentenced for stealing three trays of gold rings and ermine wraps: “Prison won’t cure me! It will make me a worse villain!”

The judge intoned: “From your appearance you look like a baby, but you are a bad thief”, and the reporters lapped it up. From that moment on, Maggie was known as Babyface.

In the 1930s, when she was sent to prison for attacking a policeman with her hatpin, she flirted with the judge as he called for her to be taken away, cheekily joking: “You didn’t say that last night, your Honour!”

In fact, violence was never far from the gang.

After one arrest, Maggie was found with a flick knife open in her handbag and Alice slashed a woman with a razor for offending her. She also spent time in Holloway for her part in a brutal attack on a father and son who had crossed the gang.

During one arrest it took six policemen to hold her down. The Partridge sisters,

Madeline and Laura, were among the most prolific hoisters in The Forty Thieves.

Madeline, noted for her beauty, and her sister were experts at distraction techniques. But, despite their skills, the pair were no strangers to the inside of the grim cells at Holloway Prison. By the early 1950s, Alice Diamond was in ill-health and the community had tired of her violence.

She eventually died of pneumonia in 1952, aged 55, having officially been working as a flower seller (though those who knew her claim she was supplementing her income working as a prostitute’s maid).

The fiery Maggie Hughes descended into drink and the gang distanced itself from her during the 1940s, as she became seen as a liability. She relied on the protection of her brother Billy Hill, a notorious Soho gangland boss, and died alone in a flat he rented for her in 1949.

If anything, their muted ending was a reminder crime doesn’t pay. Yet perhaps because they carved their own path in a traditionally male-dominated world of thieving and protection rackets, their exploits continue to fascinate.

New in Paperback: ‘The Browns of California’ and ‘The Far Field.’

New & Noteworthy Poetry, From Yale to Nick Flynn and More