Home » Books » The Divided Mind and Politics of John Boehner

ON THE HOUSE
A Washington Memoir
By John Boehner 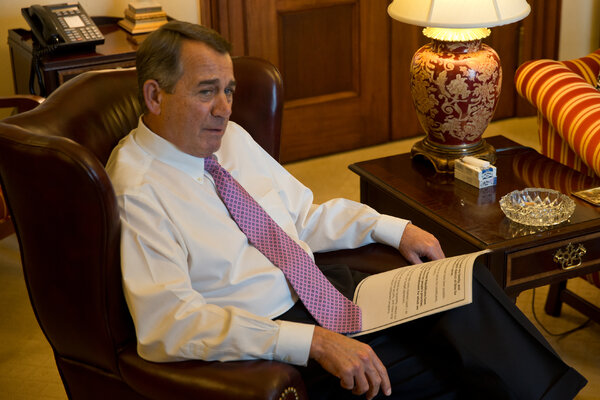 There is no shortage of insults in former Speaker of the House John Boehner’s memoir. Written in his folksy manner, “On the House” is certainly more entertaining than the standard “halls of power” narratives, as Boehner calls them.

Among the many colorful stories, we learn that Boehner once witnessed Donald Trump, before his presidency, lashing out at a staffer during a round of golf for mixing up the names of the two other members of their foursome. The North Carolina Republican Mark Meadows once got down on his knees to plead forgiveness from Boehner after voting against his re-election as speaker in 2013. We get insider accounts of policy battles over No Child Left Behind, economic stimulus and the Affordable Care Act. Of course, there are the obligatory lessons learned from Boehner’s high school football coach.

But as a work of history, the book falls short. Most important, Boehner doesn’t acknowledge the role that his generation of Republicans played in building the bridge from Ronald Reagan’s era to our current times.

Boehner, whom the House elected as speaker in 2011, is just the kind of blue-collar white male the party aspires to attract. Raised in small-town Ohio, one of 12 children, Boehner grew up in modest circumstances. He started working at his father’s “shot-and-a-beer” tavern at 8. A linebacker on his high school football team and graduate of Xavier University, where he worked as a janitor to make money, he moved his way up in the plastics industry while also serving in the Ohio Legislature. He was motivated by a desire to defend small government, lower taxes and deregulation.

Boehner was one of the Republicans inspired by the Georgia congressman Newt Gingrich’s famous tapes offering advice about running for office. In 1990, he defeated the scandal-plagued incumbent Republican Donald “Buz” Lukens to represent the Eighth District of Ohio. After the House elected Gingrich as speaker in 1995, Boehner served as Republican conference chairman until conservatives ousted both of them in 1998. Known for his chain-smoking, wine drinking and tendency to weep, Boehner returned to power in 2006 when the Republicans picked him as their majority leader. Boehner is determined to tell the story of a party that was extremely different from its current incarnation, at least until Sarah Palin became the party’s vice-presidential nominee in 2008.

Many readers who lived through Boehner in action in the early 1990s may not remember him as being that different from the insurgents of the Tea Party. Upon entering the House, he joined a group of young conservatives who promoted a dangerous style of smashmouth partisanship that ignored traditional norms of governance. Using C-SPAN and talk radio as their platforms, Boehner lined up behind Gingrich as he called on the party to abandon concerns about bipartisanship and civility in order to obtain power. They weaponized ethics rules and criminalized standard elements of the legislative process to bludgeon Democrats as a corrupt majority.

Boehner’s cohort fashioned themselves as reformers determined to make Congress a better place. In 1991, he used a report that some members had written bad checks through the House Bank system to attack the Democrats, playing down the fact that numerous Republicans, including Gingrich, had done the same thing. Most legislators had not violated any ethics rules or broken laws, but Boehner and his allies made it seem that way.

Senior legislators saw these renegades (Boehner prefers the term “activists”) as threatening their ability to govern. Boehner admits that the only reason Republicans voted to impeach Bill Clinton in 1998 was that the majority whip, Tom “the Hammer” DeLay, promised that doing so would “win us all these House seats.”

The fact that partisanship, rather than reform, drove his actions quickly became clear at the time. Boehner, who is now a lobbyist for the cannabis industry, shed most of his concerns about political civility after Republicans came to power in 1994. He himself emerged at the center of the nexus that connected private money, corporate lobbyists and political parties.

It wasn’t just that Boehner took money and hired staff members from interest groups. He was in the Republican leadership that started the notorious K Street Project, which created a revolving door between lobbyists and party loyalists. When top staffers left their jobs, they were instantly hired by interest groups that relied on them to gain access on Capitol Hill; as a Republican leader, Boehner played his part. He headed the Thursday Group, which brought together lobbyists and legislators. In 1996, Boehner was caught handing out campaign checks from the tobacco industry on the House floor just as subsidies to the industry were being considered; Boehner dismisses the incident by saying that times were different.

Hardly the stuff of reform. Nor was Boehner’s commitment to issues very pure. He railed against higher debt when Democrats were in the White House, less so when George W. Bush was the president.

The former speaker is determined to wipe his hands clean of the radicals who now dominate his party. The memoir posits a stark divide between the Republican universe before and after 2008. “None of us were crazy — well most of us weren’t anyway — and we also knew our limits,” he notes. Even in 2009, he insists, the bones of traditional party were still there. Boehner claims that there were a “bunch” of Republicans who would have voted for Obama’s stimulus bill if only he had consulted with them. This argument comes from a leader whose Senate counterpart, Mitch McConnell, vowed to make Obama a one-term president. It also mischaracterizes an administration that went overboard, to the consternation of liberals, to negotiate with a party hellbent on obstruction.

The artificiality of this divide is especially evident in Boehner’s discussion of the conservative media. While acknowledging that the world of Fox News is now a “Looneyville” of conspiracy theory, Boehner insists that things used to be different. Although Bob Grant once wished that Haitian immigrants would drown and Rush Limbaugh lashed out against “feminazis,” Boehner tells us that the right-wing airwaves used to be tame.

Indeed, Boehner is a prime example of how the Republican establishment made peace with extremists in pursuit of power. In describing the younger conservatives in 2008, he shows he understood what he was dealing with, referring to Republicans from “Crazytown” who tried that year to subvert President Bush’s stimulus package. And two years later, he recalls, “you could be a total moron and get elected just by having an R next to your name.” Yet during that very campaign, Boehner helped provide financial support to Tea Party candidates and heaped praise on them as “the latest example of how the Tea Party movement has done this nation a great service.” Though Boehner has continued to be haunted by memories of his ouster by the right in 1998, he knew that harnessing rage could be an effective tactic.

It was Boehner, Obama recalls in his recent memoir, who first broached the threat of not raising the debt ceiling in 2011 — a radical move that would have sent the nation into default. When Republicans held the vote on the debt ceiling hostage again in 2013, demanding that Democrats repeal Obamacare, Boehner stood by their side despite thinking it a “dumbass” idea. He acquiesced to shutting down the government to please the Tea Party. As Boehner’s chief of staff Mike Sommers admitted, “We fed the beast that ate us.” In 2015, he resigned as the Tea Party attempted to oust him.

Boehner is so invested in seeing the Tea Party as an aberration that he goes to great lengths to explain the “chaos caucus” through the skewed lens of both sides-ism. After describing the lunacy of the birther movement, Boehner proceeds to claim that the divisions were also the fault of Obama for being too “haughty” and refusing to engage in “outreach.”

But until senior Republicans acknowledge how they helped radicalize the party, there is little hope that it will transform itself. Boehner’s memoirs are an X-ray into the mind of Reagan-era Republicans who did whatever was necessary to win and who today are seeing the high costs of their decisions.

Winds of Winter theory: Lady Stoneheart to rescue for Edmure Tully – but there’s a catch