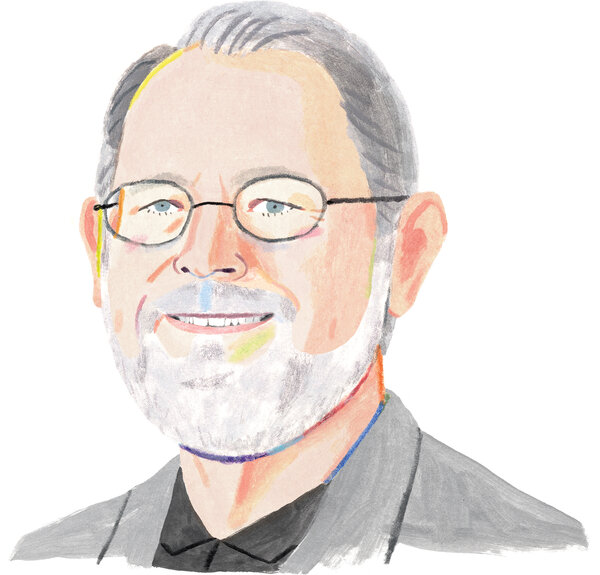 “Is there a more mysterious and nefarious villain than Moriarty?” asks the mystery writer William Kent Krueger, whose latest Cork O’Connor book is “Lightning Strike.”

What books are on your night stand?

Because I don’t read in bed, I have no books on my night stand. Usually, I work a New York Times crossword puzzle before turning out the light. If I try to read a book, I drift off before I’m engaged and, night after night, I find myself going over the same pages trying to get a grip on the story. So my reading is generally done in the afternoon. What I currently have on my coffee table are two advance-reader copies of novels by friends of mine, which I’ve promised to read for dust jacket quotes, and “Jim Henson: The Biography,” by Brian Jay Jones, a fascinating look at a true original artist.

“Great” is a broad term. If you mean the last book whose originality of vision, power of language and thematic weight impressed me, I would have to say it’s Colson Whitehead’s “The Underground Railroad.”

If, however, you mean, what is the last book I read that I most greatly enjoyed, I would say Fredrik Backman’s “Anxious People.” In all of Backman’s stories, there’s a compelling sense of humanity and a profound compassion for frail human beings, and aren’t we all frail?

Are there any classic novels that you only recently read for the first time?

For years, I’ve led a book group for my church community. Last year, we decided to tackle a novel by each of America’s Nobel Prize winners. I’d already read every selection that was chosen, with the exception of our choice for William Faulkner. Because Faulkner can be a difficult author for the uninitiated, I’d suggested “The Reivers,” his final novel, which was a Pulitzer Prize winner. We were all pleasantly surprised by its accessibility and lightness of tone, and it turned out to be the group’s favorite read, and mine as well.

Describe your ideal reading experience (when, where, what, how).

I need a story that grabs me quickly, that’s told with a powerful narrative voice and powerful language, and that ideally is by an author new to me. It’s like digging for and finding treasure. Once I’m captured, I tend to read slowly, savoring the words and rhythms, stopping often to admire the imagery. As I’ve already said, I read in the afternoons, and I love a book that makes me want to skip dinner in favor of the story.

What’s your favorite book no one else has heard of?

“Last Looks,” by Howard Michael Gould. It’s a mystery with a unique protagonist, Charlie Waldo, a man who is committed to possessing only 100 things. Waldo is immensely likable, and the novel is funny, poignant and suspenseful, everything that a good story should be.

Which writers — novelists, playwrights, critics, journalists, poets — working today do you admire most?

In the mystery genre, James Lee Burke, of course. I believe all mystery writers aspire to write prose as beautiful as Burke’s. My favorite poet these days is Ted Kooser, a Great Plains poet whose work, like the landscape he evokes so beautifully, is unadorned yet profound. And I stand in awe of the scripts written by Aaron Sorkin. Doesn’t everybody?

What do you read when you’re working on a book? And what kind of reading do you avoid while writing?

I’ve become quite comfortable with my own narrative voice, and so I’m no longer concerned about being unduly influenced by another author’s work. There’s nothing I wouldn’t read. But I confess that sometimes I need to be inspired to reach a little farther in my own work and then I read Cormac McCarthy.

What’s the most interesting thing you learned from a book recently?

Lisa Wingate’s “Before We Were Yours” opened my eyes to yet another tragic example of the power differential between those who have money and those who do not. Although fiction, it depicts the real circumstances of children during the Great Depression who were stolen from their impoverished families and adopted by the childless well-to-do, which was a revelation to me. This powerful tale solidifies my own belief that the stories we write can do more than just entertain. They can enlighten.

What moves you most in a work of literature?

Powerful narrative elements. Although a good plot is important, I’m more compelled by a profound sense of place, deft use of language, dialogue that sings. And, of course, richly drawn characters, because for me, a good story’s not so much about what happens as who it happens to. “The Adventures of Huckleberry Finn” is a great example. In addition to all those marvelous narrative elements, Twain gives us Huck and Jim. In the end, it doesn’t matter what exactly these two characters involve themselves in; because we love them, we’d follow their story anywhere.

Which genres do you especially enjoy reading? And which do you avoid?

Naturally, I’m drawn to crime fiction, but there are a lot of subgenres in that broad category, and some of them I much prefer over others. I love a good, tough P.I. novel à la Raymond Chandler or Dashiell Hammett, but I’m not fond at all of those darker corners of the genre in which graphic violence, particularly toward women, seems to be an essential element. When I’m reading outside the crime genre, I gravitate toward novels set in the Midwest. I think a case can be made that there’s a Midwest voice in literature. It’s spare but eloquent and rises significantly out of an understanding of our spiritual relationship with the land here in the Heartland. Marilynne Robinson’s “Gilead” is a perfect example.

Who’s your favorite fictional detective? And the best villain?

So cliché, I know, but Sherlock Holmes never fails to intrigue me. And is there a more mysterious and nefarious villain than Moriarty?

What makes for a good mystery?

Plot is important, but by far, it’s the narrative elements that make a mystery good or even great. Let’s go back to Sherlock Holmes. Tricky plots, yes, but it’s Holmes and Watson and the atmospheric English setting that make these stories ageless entertainment. Raymond Chandler’s plots sometimes go a little awry, but his flair for startling metaphor and simile and his compelling detective Marlowe make the stories endlessly enjoyable.

How do you organize your books?

Organize? I have four large bookcases in my home and countless stacks of unshelved books. With the exception of the shelves on which my own novels sit, there is no rhyme or reason to the location of the books.

What book might people be surprised to find on your shelves?

I’m not sure how surprising it is, but the book on my shelves that I can locate most easily and that I pull out most often is an extraordinarily large volume, “The Complete Cartoons of The New Yorker.” When I need to be yanked out of a dark mood, the diversity of wit in those pages is sure to do the trick.

What’s the best book you’ve ever received as a gift?

When I was 11, for Christmas that year, my parents gave me and my siblings a collection called “Favorite Poems Old and New.” Every night at bedtime, my father would read to us from those pages. I grew up on the great story poems included in the volume — “The Highwayman,” “Little Orphant Annie,” “The Charge of the Light Brigade.” Is it any wonder that adventure is an essential element of the stories I write? Thank you, Mom and Dad.

What kind of reader were you as a child? Which childhood books and authors stick with you most?

Before I discovered the joy of great stories, I was hooked on D.C. comic books. The first book that made a profound difference in my life was “The Count of Monte Cristo,” which was suggested to me at the age of 12 by a librarian in the small Ohio town where my family was living at the time. With that classic adventure novel, I discovered the power of great storytelling. After that, I read everything the library had by Dumas. Then that same wonderful woman turned me on to Jules Verne, H. G. Wells, Arthur Conan Doyle and Robert Louis Stevenson. God bless librarians.

How have your reading tastes changed over time?

My tastes haven’t changed as much as my habits. I used to read constantly, one of my greatest pleasures. But the demands of my profession — research, deadlines, signings, events, conferences — have eaten away at my time for pleasure reading, so I read a good deal less than I used to. When I do read for pleasure, I choose very carefully and only stay with those stories that impress me from the beginning.

If you could require the president to read one book, what would it be?

At the moment, I would suggest “The Grapes of Wrath.” We haven’t come very far in this nation in how we care for those in dire circumstances, and all of us, especially those in the highest and most influential offices, need to be reminded of the human face of misery.

You’re organizing a literary dinner party. Which three writers, dead or alive, do you invite?

Hemingway, because he was my first true literary hero. Steinbeck, whose work I continue to appreciate for its sense of place and compassion for the underdog. And Emily Dickinson, because I’d love to know how it must feel to write passionately across a whole lifetime yet have your work read and appreciated only after your death.

If you were to write something besides mysteries, what would you write?

Ghost stories, which I grew up on around campfires as a Boy Scout.

Disappointing, overrated, just not good: What book did you feel as if you were supposed to like, and didn’t? Do you remember the last book you put down without finishing?

On half a dozen occasions, I have attempted to read “Moby-Dick.” I never get beyond a hundred pages. The last book I profoundly remember putting down without finishing was “The Da Vinci Code.”

What do you plan to read next?

Once I’ve read the books currently on my coffee table (see my answer to the first question), I’ll read “The Book Woman of Troublesome Creek,” so that I can lead my church book group discussion of it this fall.