A look at the artists behind this year’s winning books, in their studios. 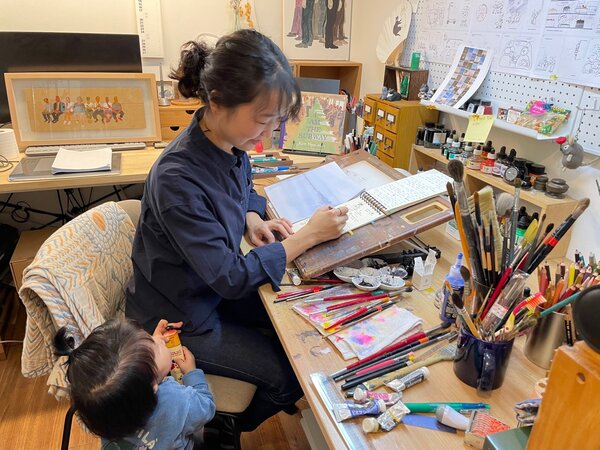 I Am the Subway

“When I first decided to become an illustrator, I practiced drawing on a regular basis. One of the most frequent exercises I would do was quick character drawings of the passengers in my car during subway trips. The more I drew these random characters, the more I wondered who these people were and what their lives were like. These seemingly inconspicuous characters whom we pass by every day are people with their own special stories and dreams. I felt inspired by this notion and decided to base a picture book on it.

“I was determined to use mediums that are usually found in an average Korean pencil case: a graphite pencil; blue, black and red ballpoint pens. I also kept my daily sketchbooks on hand for constant reference and inspiration, and made it a regular habit to ride the subway and draw the passengers I came across.” — Kim Hyo-eun

Written and illustrated by Marie Dorléans

“There is always intense emotion at dawn on a night walk. I really wanted to share this experience with young readers — in making ‘The Night Walk,’ my vibrant desire was for my readers to feel this excitement, and want to try it themselves. It took me about six months to complete the book. I had just joined a new collective studio, along with some painter and ceramicist friends. Sharing a space with artists whose practices are different from my own nourishes my work. The book is enriched with our pictorial discussions.

“On my work table, there were pencils, blue inks and a plethora of different kinds of paper. I wanted to find the paper most suitable for coloring night skies. On my wall, there were my daughter’s very first drawings. (I cannot wait until she is old enough to walk to a sunrise!) There was also a photo of my meeting with the esteemed French illustrator and cartoonist Jean-Jacques Sempé, which has kept me company in all my studio spaces. Thinking about his work inspires me every day.” — Marie Dorléans

Time Is a Flower

Written and illustrated by Julie Morstad

“When I started the book in 2019 I had been thinking a lot about how fast, and conversely slow, time seemed to be going by — my kids were growing up too fast and I was solidly in my 40s, but I still felt young. I felt confused by the passing and relativity of time; it made me want to pick up the concept of time like an object and look at it from different angles. Of course, the idea of time sort of melted or collapsed once we all went into the pandemic lockdown, and then it became really weird and fun to be working on this book.

“I have been working in this home studio on and off over the past eight years. I like it because it’s bright. I have bee-covered dahlias, cosmos and verbena growing up outside the window, and my family is close by. It’s way too small for what I need, but its proximity to tea and snacks in the kitchen makes up for that. We live in a co-op and there is a playground next to our place, so I hear little kids’ voices coming in from the window most of the time and I love it.” — Julie Morstad

It Fell From the Sky

Written and illustrated by Terry Fan and Eric Fan

“Like most of our books, the initial idea came from a stand-alone illustration we had drawn about 10 years ago showing a group of insects — all wearing top hats — surrounding a marble in the garden. We find it helpful to use an image as a springboard for our stories; the trick is finding one that seems to already have a story around it, or is open-ended enough to suggest one. As we go through the process of interrogating the image, the story has a way of slowly revealing itself.

“Terry and I were both isolating during the first part of the pandemic, so when the strictest lockdown measures were lifted — and you were allowed to create a ‘social bubble’ — we were able to work on stuff together on occasion. We also share a Dropbox, so we could both work on the art and edit it, essentially in real time, so the separation didn’t affect our collaboration or work flow too much.” — Eric Fan

Saved by the kindness of British strangers