Home » Books » Sometimes, the Funny Thing About Poetry Is the Poems

When we were both young and unknown poets, Patricia Lockwood had a blog with the tagline “Poems Are Jokes.” For years, this phrase has come back to me, when I hear an especially poetic joke or read an especially jokelike poem. It has the lifted-brow provocation of all good aphorisms, daring you to believe it.

I always found it interesting, but the claim took on a different valence after “Rape Joke,” a poem Lockwood published in 2013. I associate it with the discourse surrounding an incident at a comedy club in 2012, when a woman in the audience yelled, “Actually, rape jokes are never funny!” at the comedian onstage, who then reportedly said, “Wouldn’t it be funny if that girl got raped by like, five guys right now?” It’s shocking, and yet unsurprising, that the comic defended this threatening, utterly unfunny remark as a joke.

Lockwood’s poem is a brilliant, oblique response to the question of whether a joke about rape can be funny. It takes the form of a search for some shred of bitter humor in a violent story: “The rape joke is that his bookshelf was just a row of paperbacks about serial killers.” The poem is long and hypnotizing, and every time I read it it knocks the wind out of me: “The rape joke is that for the next five years all you did was write, and never about yourself, about anything else, about apples on the tree, about islands, dead poets and the worms that aerated them, and there was no warm body in what you wrote, it was elsewhere.”

If the question is not unanswerable, the answer seems to be that the right to tell a “rape joke” belongs to the victim — and there’s subversive power in using the formal properties of the joke to complicate, rather than trivialize, trauma. Humor can be used as a defense mechanism (“The rape joke is you went home like nothing happened, and laughed about it the next day and the day after that, and when you told people you laughed,” Lockwood writes) but it’s also a reclamation of control — a refusal to be told how to feel about your own lived (and relived) experience.

People are like, ha ha your poems are funny, and that’s a kind of a
miracle. I’m grateful. It’s nice to share the joke of my existence
with you. But, like the fish who tried to swallow Tobias’ foot in a
lesser known moment in the Bible, I seem to function one way,
when my life is really hidden in another. 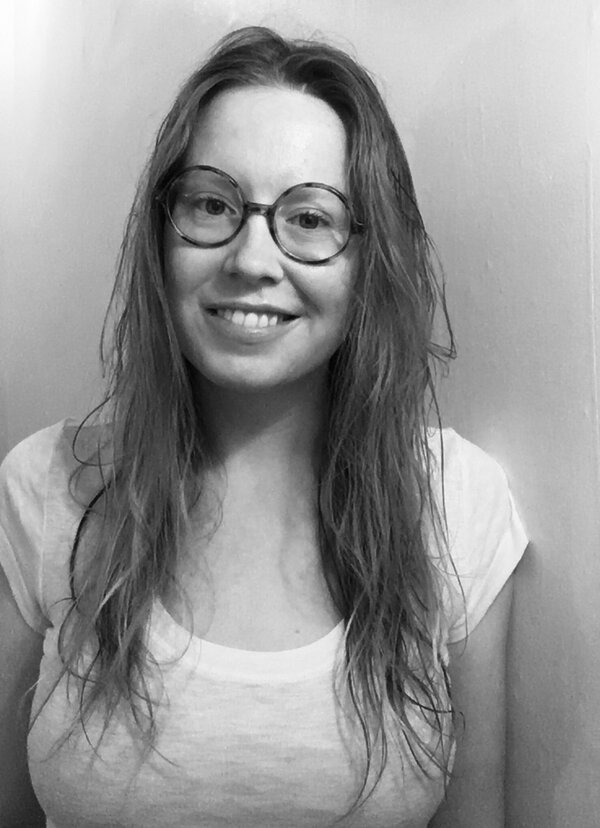 This calls to mind the Kenneth Koch poem “One Train May Hide Another”: “In a poem, one line may hide another line.” A jokey line may hide a painful line. As one reads deeper in the book, the trapdoors lead to deeper pits. The poem “Color Theory” starts a bit exercise-y, as if in response to a prompt: Write a poem where each line names a color. “It’s getting so purple in here it’s breaking my heart. / On the Eve of St. Agnes, your stalker wears big lilac mittens and rearranges your fruit.” Then, toward the end, a gut-punch moment, a sneak attack:

There was a time when I could only focus my eyes on the smallest thing.

At a certain point, it’s all too much, so you think about your laundry, what to make for lunch, briefly your rape, then an expanse of black velvet.

How a darkness spread over their eyes.

The gorgeous strangeness of “Green makes it go violet” justifies the near-silliness of earlier lines like “a lemon is blue inside.” Normile’s poems can trick you this way — they trick you into feeling more than you were quite prepared to feel. The book’s last, stunning poem, “My Life So Far,” riffs its way casually (“When I was fifteen I was new / at my high school and a girl named Dawn / gave an impromptu presentation on water”) into a fantasy of vengeance: “If I could have any one thing / it would be the chance to go back / just this once to kill them.” “I thought this poem might be funny,” Normile writes in the last stanza; “And if it wasn’t midnight I would tell you in what ways.”

ARROW (Alice James, 79 pp., paper, $16.95), Sumita Chakraborty’s allusive and witty debut, also twists familiar forms into new shapes that turn toward and challenge the reader. A series of “essays” feel playfully like cross sections of academic papers, like fractions of argument divorced from their context, the way a paragraph in isolation can read like an instant prose poem. In “Essay on Thunder,” a poem in two paragraphs, Chakraborty quotes Stendhal on “love at first sight”: “Soul-shaking upheaval means something like what he elsewhere calls the curse of passionate love, although my sense is that love here is better understood as either arousal or torpor, and that distinctions in such matters are, while necessary and true, ultimately mythological.”

The second paragraph is almost pure digression, if it’s possible to digress from a topic you have only barely touched on: “When I first copied down those sentences from Stendhal, I wrote instead of upheaval the non-word unheaval, which I now think of as upheaval’s uncompromised sibling.” The speaker then describes “a watercolor of a lurid hummingbird” on the ceiling of her gynecologist’s office. The poem concludes: “Hummingbirds use their beaks to feed, as well as to do battle. There has not yet been a study of what their tongues do in such times of war.” The appropriation of scholarly language for lyric effect reminds me of Anne Carson — the joke here is that this is not really an essay and not really about thunder, but the joke on the joke is that perhaps it is an essay, perhaps it is an essay on thunder. Form is elastic, and content is elusive.

Chakraborty writes poems that are full of life and joy even when she is thinking through violence and grief, but in their sweep they defy easy notions of aboutness. Her collection’s first poem, “Marigolds,” begins with an image of Robert Lowell “with the swans” in Boston’s Public Garden, and from there follows an unpredictable flight path, like a moth or a bat, or a planned but mysterious path like the satellites that seek out “alien oceans on other planets.” The poem is part homage, part elegy (“My sister has joined the list of those I mourn”), and part ars poetica (“The day I first learned the word argonaut, / I wrote it in a poem … I found the word spears, which I drove slowly / into my father’s ribs”). Here, words themselves are weapons — “Always in my mouth / I hold the head of an axe with its bit at the back / of my throat” — and to wield them is to triumph over worldly violence: “As the rifle, I point my mouth, deadly, toward you … My lord, I aim a mile beyond the honeyed moon.”

The Persistence of the Oldest Hatred