Home » Books » She Fled the Iranian Revolution, but Her Troubles Didn’t End There

THE UNGRATEFUL REFUGEE
What Immigrants Never Tell You
By Dina Nayeri

Dina Nayeri was not yet 6 years old in 1985 when she visited her eccentric maternal grandmother, Maman Moti, in London. Nayeri’s parents were both medical professionals in the city of Isfahan in Iran, where a bloody war with Iraq was raging and Iran’s revolutionary regime was still executing its opponents. In London, Nayeri’s grandmother, a Muslim by birth, had converted to Christianity and found freedom in her new religion. During that visit, in what appeared to be an act of rebellion, Nayeri’s mother also reached out to Jesus, knowing in Iran she would be considered an apostate, punishable by death.

Back in Isfahan, Nayeri became a target at school, where devout religious teachers harassed her. Her mother was arrested three times and her relationship with Nayeri’s father, an opium addict who abused her, deteriorated. Three years after the London trip, Nayeri and her mother and younger brother boarded a cargo plane and began a 16-month journey as asylum seekers in Dubai and Rome, until they settled down permanently in Oklahoma.

“The Ungrateful Refugee” finds Nayeri decades later, after she’s grown up in the United States, moved to Europe and gotten both American and French citizenships. But these pages are filled with flashbacks of the traumas she endured as a refugee, related in a voice that is both injured and at times angry. “For two decades, our escape defined me,” she declares early in the book. “It dominated my personality and compelled my every decision.” Life in Iran had been a fairy tale compared to that in Oklahoma, where she “lived in an apartment complex for the destitute and disenfranchised.” 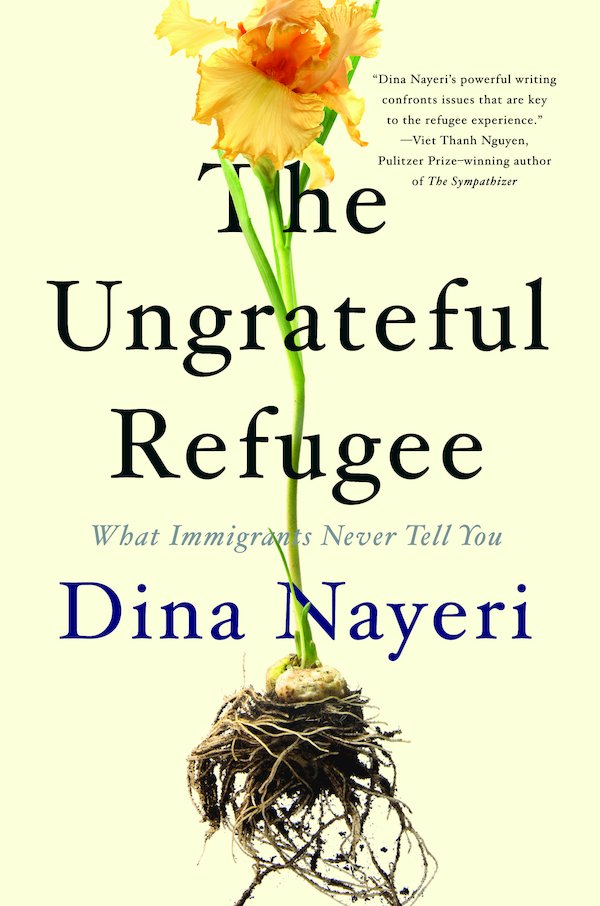 But Nayeri shed both her accent and her Iranian identity to fit in her new home, where she thought she could grow up believing in herself. Her story is about the transplant’s struggle for acceptance in a society where discrimination is rampant. In Oklahoma, kids called her, among other vulgarities, “cat-eater, terrorist, sand-nigger.” She remained silent and tried to be grateful for her American life.

Once in Oklahoma, Nayeri becomes determined not just to transform herself into an American, but to get into Harvard — to prove her worth and also to escape the kind of intimidation her educated mother faced working in a factory. “These are stories of uprooting and transformation without guarantees,” she writes, “of remaking the face and the body, those first murderous refugee steps — the annihilation of the self, then an ascent from the grave.”

Nayeri, the author of two novels including “Refuge,” uses her first work of nonfiction to remind readers of the pain and horrors refugees face before and long after their settlement. It is timely, as President Trump has made barring refugees from the United States a priority, and the Western world is plagued with a surge in nativism. Nayeri combines her own experience with those of refugees she meets as an adult, telling their stories with tenderness and reverence. The overarching thesis of the book is that for refugees, their past is part of their identity, and their effort to fit in is an act of love. Their attempts to assimilate are sometimes so painful they succumb, as happened to one of her subjects, Kambiz, an Iranian refugee who set himself on fire in a square in Amsterdam in 2011.

Three decades later, Nayeri finds herself divorced, living in London with a new partner and their daughter. But even here, she struggles to make sense of the places that made her. She cooks Persian dishes in search of her Iranian identity and serves Maman Moti tea at her table. But even her grandmother, who adopted a British identity and said she “wanted nothing to do with the past,” can’t deny her roots: She writes letters brimming with the heart of Iran.

Nazila Fathi is the author of “The Lonely War: One Woman’s Account of the Struggle for Modern Iran.”

THE UNGRATEFUL REFUGEE
What Immigrants Never Tell You
By Dina Nayeri
350 pp. Catapult. $26.