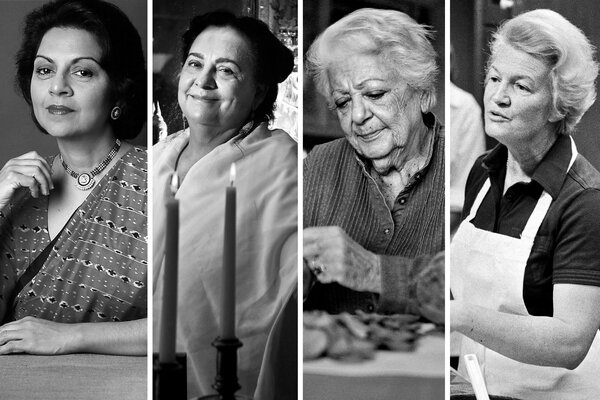 When Mayukh Sen started working on his book “Taste Makers,” in 2017, he could not have foreseen the climate in which it would be released. The race and class injustices that beset his seven subjects — all immigrant women who were cooks and, with one exception, cookbook authors, active between the postwar era and the present day — remain agonizingly apparent within the food industry. The roadblocks that prevented the women’s ascension then are still largely in place today. During the lockdown summer of 2020, many of these inequities spilled into public view; accusations were leveled, jobs were lost and sweeping change was promised. While we have yet to see the full consequences of the awkward social-media-fueled reckoning, Sen’s book is unquestionably timely, an opportunity to reflect on America’s complicated history with immigrants and their food, and to ask the question: How did we fail to acknowledge the impact of these accomplished foreign-born cooks, even as we devoured the meals that they introduced to our tables?

When we speak of the feats of immigrants, we tend to think of displacement, resilience, resistance, persistence, ingenuity and adaptability; Sen embeds these themes within intimate, individual stories as a way to unravel how his subjects’ achievements — and struggles — have contributed to what and how we eat in America today. The women we meet in his book — Chao Yang Buwei, Elena Zelayeta, Madeleine Kamman, Marcella Hazan, Julie Sahni, Najmieh Batmanglij and Norma Shirley, each from a different country — are by no means household names. And there’s the rub. These are women who carved out careers in food at a time when it was not easy to do so. They left their mark not only on the cuisines of their culture of origin, but their work helped, as Sen puts it, “popularize flavors that challenged the nation’s dominant palate,” paving the way for generations of chefs and food writers to come.

Sen’s first subject is the formidable Chao , a doctor in her native China, who wrote America’s “first systematically thorough cookbook on Chinese cooking”: “How to Cook and Eat in Chinese” (1945). At a time when Chinese cuisine was often seen as “too unclean for white Americans to consume” — an attitude that still exists in some segments of the population — Chao sought to recalibrate public perceptions, explaining the process of stir-frying, for example, and giving America a whole new language for Chinese cooking. (The first recipe didn’t appear for more than 50 pages.)

Chao’s talents were stymied by her lack of English skills. Her eldest daughter, Rulan, helped her translate her work into English, but her overzealous husband, Chao Yuenren, a Harvard linguist, distrusted their efforts and the published cookbook included his off-kilter renderings, such as “Mushroom Stir Shrimps.” The language barrier diminished Chao’s voice and presence in her books, and she never achieved public celebrity or widespread industry acclaim; her impact on the world of food went unmentioned in the one line she received in her husband’s 1982 New York Times obituary: “His wife, Buwei Yang Chao, died in 1981.”

As Sen moves through his subjects’ stories, each chapter raises questions about the obstacles that prevented them from ascending the ranks of the food industry and achieving the fame of other luminaries, such as Julia Child. He nimbly weaves in an “interlude” on Child — “Julia Child, American Woman” — which examines her rise as a pre-eminent authority on French cooking. The chapter is a detour that provides crucial perspective on his other subjects. Child was an American icon, a home cook who became a household name. While her impact on American food is undeniable, Sen underscores another point: “Julia possessed a unique qualification that allowed her to be a great teacher of French cooking for Americans: She carried no threat of the outsider.” This assertion is presented as fact, not criticism, but it may bring discomfort to Child’s devotees, particularly as it precedes his next chapter, about the French chef Madeleine Kamman.

Born in Paris, Kamman moved to Pennsylvania with her husband in the early 1960s. Cooking the dishes of her homeland was a way of assuaging her loneliness. In 1970, after moving to a town outside Boston, she established a cooking school, which offered nine classes exploring both French and American cuisine. Throughout her career, she was known to be a stickler for technique, studying history to understand the origins of a dish — “Something terrible happened to onion soup after it crossed the ocean and came to America,” she wrote with characteristically humorous disapproval — and she went on to write seven cookbooks.

Despite her accomplishments, Kamman suffered endless comparisons to Child, the doyenne of the Boston food world, and the two women sparred publicly. (Child adopted the habit of forwarding all Kamman’s letters to her lawyers.) Writing in The Los Angeles Times in 1971, Jeanne Voltz claimed that Kamman “borrows techniques but not recipes from the Julia Child books.” Yet Kamman, Sen explains, was asking Americans not so much to respect French cooking, something that Child had already achieved, but to respect the cooking of a Frenchwoman. That was a more complicated ask, given that Child had told The Washington Post in 1970, “Frenchwomen don’t know a damn thing about French cooking, although they pretend they know everything.” Kamman retaliated in The New York Times in 1981, saying: “When you try to teach a cuisine that is not your own, there is always one dimension missing.”

The Boston Globe declared Kamman’s restaurant Chez la Mère Madeleine “simply the best restaurant in Boston,” but she continued to struggle for the respect of the local food community. She publicly called out sexism, and she paid the consequences. Her bluntness was seen as a handicap, many in the industry citing it as a means of discrediting her talents. A dedicated teacher and prolific writer, she never achieved the acclaim Child did, but Sen points out that her willingness to speak her mind, including about the unequal treatment of women in her profession, “gave permission to a generation of younger women to follow her lead, to be angry, to agitate in public.”

Sen, an award-winning food writer, frequently uses the term “food establishment,” coined in 1968 by Nora Ephron for “those people who write about food or restaurants on a regular basis, either in books, magazines or certain newspapers, and thus have the power to start trends and, in some cases, begin and end careers.” For the women in this book, success almost always depended on winning over the predominately white and upper class food establishment, and, as Sen shows, such approval was not easily gained. In the case of Batmanglij, an Iranian immigrant, that meant largely forgoing it: To get her cookbooks printed, she was obliged to create her own publishing house.

Many readers may wonder why this book was written by a man. It’s a valid question and one Sen addresses in his introduction. As a “queer child of Bengali immigrants to America,” he writes, he gravitates toward “story subjects who, like me, once felt that they did not belong.” Sen is a sensitive and perceptive journalist and a deft historian; his willingness to let his subjects speak for themselves whenever possible gives his book a compelling power. He tells their stories with care, while, as he puts it, striving to “let my own voice fade as much as possible.” In doing so, he succeeds in amplifying the voices of seven overlooked women to the levels that they always deserved.

‘The Zealot and the Emancipator,’ by H.W. Brands: An Excerpt

New in Paperback: ‘Why We Swim’ and ‘The End of October’