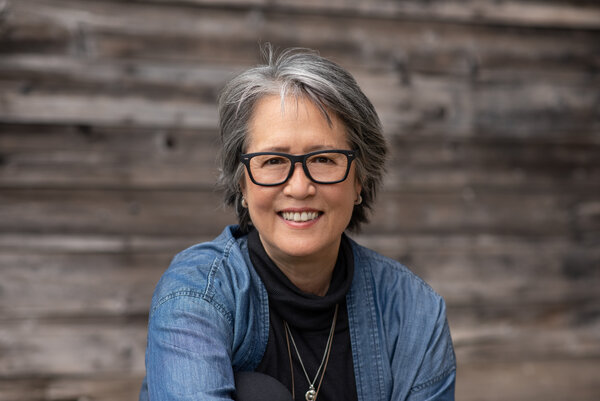 THE BOOK OF FORM AND EMPTINESS
By Ruth Ozeki

The Japanese American novelist Ruth Ozeki is an animator. I don’t mean that she produces graphic novels or manga or anime, although her work does have the fairy-tale feel of some anime movies. I mean that she endows objects and animals with anima, the breath of life. Adept at magical realist fiction, Ozeki ensouls the world. Everything in her universe, down to a windowpane and a widget, has a psyche and a certain amount of agency and can communicate, if only with the few human beings granted the power to understand them. Crows caw Cassandra-like about imminent danger or snatch an ornament off a character’s head and fly away in a direction that leads that character to her destiny. A freezer bag containing a precious diary finds its own way across the Pacific. Scissors jump off a desk, aiming to get themselves into the hands of people who might know what to do with them.

A filmmaker as well as a novelist, Ozeki is also, it’s worth noting, a Zen Buddhist priest. Both of the novels she has published since being ordained in 2010 — “A Tale for the Time Being” in 2013, which was a Booker finalist, and her latest, “The Book of Form and Emptiness” — marry Zen parable to postmodernist metafiction. In this book, Ozeki leans heavily on Jorge Luis Borges and Walter Benjamin, whose 1931 essay “Unpacking My Library” deals with the physicality of books. “The Book of Form and Emptiness” is, of course, a book — that is, a thing, upon which Ozeki has naturally conferred sentience. But it stands out among the story’s other sentient entities in that it has extraordinary powers of self-reflection and self-replication. This is a Book, as well as a book. It serves as both narrator and instructor. It tells the story; it tries to teach the hero to tell his own story; and it struggles to get him and us to understand the true meaning of Books: that they are the maps of Life.

Our hero is 14-year-old Benny Oh, the son of Kenji, a jazz clarinetist, and Annabelle, who clips articles out of newspapers for a living (the novel begins in the 1990s). They live on the sleazy side of an unnamed American town. A year before the story opens, Kenji was killed in a humiliating accident: A truck carrying chickens ran him over in their trash-strewn back alley, mistaking him for a sack of garbage as he lay on the ground in the early hours of the morning, too stoned to get up. His drug use notwithstanding, Kenji was his family’s anchor, keeping its affairs in order and his son and wife happy. After his death, chaos takes over.

Now Benny is becoming one of those people, hearing the chatter and moans of the inanimate things that surround him, and the noise is driving him mad: “The minute I walk through the door of a Starbucks, the overhead fluorescent fixtures start buzzing with this anxiety of meaning, and the coffee beans start screaming, and I’m literally assaulted by the pain of paper cups and plastic straws.” As his world grows louder and louder, school officials send Benny to a dangerously clueless psychiatrist. She diagnoses “schizoaffective disorder,” prescribes mind-curdling drugs and eventually sends him for a stint in a psychiatric institution. Annabelle is no help. Her solution to Benny’s problems is to sing him nursery rhymes. She has put on weight and become slovenly, mortifying Benny with her stretch pants, dirty sneakers and stained shirts. She seems likely to lose her job and may even get herself and Benny evicted, since she has developed a bad case of hoarding. Annabelle can’t stop collecting crap — craft projects from Michaels she’ll never open, kitschy snow globes spotted on eBay — and she won’t throw any of it away. Things speak to Annabelle too, in their way.

Once out of the hospital but still tormented by voices and targeted by bullies, Benny plays hooky from high school and takes refuge in the local library (eventually revealed as the Library, home of the Book, therefore a labyrinth of mysterious meanings). At first Benny hides in a carrel, but after a while he is taken in by a cadre of outcasts. One of these is Alice, a young, ethereal conceptual artist, dumpster diver and serious drug addict whom he had already met and fallen in love with at the hospital. A mentor of Alice’s, the Bottleman, also draws Benny into his orbit. The old hobo scoots around aggressively in a wheelchair bulging with bags of empty bottles, and Benny has been avoiding him: He’s exactly the kind of street person Benny is sure he’ll end up as. But actually, Alice explains, the Bottleman is the most famous poet in Slovenia, a philosopher and revolutionary. “It’s not him that’s crazy,” she tells him. “It’s the … world we live in. It’s capitalism that’s crazy. It’s neoliberalism, and materialism, and our … consumer culture that’s crazy.” The Bottleman sets about giving Benny a proper education, starting with a shot of vodka and an assignment: Think of a philosophical question. Benny can’t, but the Bottleman helps him to formulate one: “Obviously, you must determine vat is ‘real!’” he says. “That’s the PROBLEM!” Benny wails. “I don’t know what’s real and what’s not!” If the voices are real, he thinks, that means he’s “not crazy.” Exactly, the Bottleman says. Go home and contemplate the nature of reality.

Later the Slovenian poet coaxes Benny into wrangling the voices onto paper. Benny transcribes a memory he apprehends from a wooden table leg. But then he wonders: What if he made the whole encounter up? The table leg’s story had seemed to melt into nothingness as soon as he tried to commit it to words. That’s the poet’s dilemma, the Bottleman informs him: “You have to keep your mind open and try to feel the voice of the poem as it blows by, even if it hurts a little. He said the trick is not to grab at the wind because as soon as you do, it won’t be there.”

There’s powerful magic here. I’d call it Zen if I knew what I was talking about. In any case, Ozeki does not grab at the wind. She is unusually patient with her characters, even the rebarbative ones, and she is able to record the subtle peculiarities of other classes of being that more overeager writers would probably miss. By juxtaposing a Benny trying to push the clamor of things out of his head and an Annabelle who binge-eats them, as it were, Ozeki gives us a metaphor for our own very American consumption disorder, our love-hate relationship with the stuff we overproduce and can’t let go of.

I do have nits to pick, though. Like Annabelle’s house, the novel is overstuffed. I could complain about the excess of plot twists and the extraneous characters, like the female Zen priest who’s written the best-selling anticlutter guide that follows Annabelle around the house despite her attempts to misplace it. Both guide and priest feel like dei ex machina come to clean up the messes our characters get into. The more interesting aggravation, however, is the novel’s framing device — that is to say, the Book as both narrator and character. The conceit is grating. The Book has a bad habit of Book-splaining. “The dark side has its allures, Benny, but most people don’t want to go there,” the Book pontificates, not without condescension. “They prefer to stay safely on the bright side instead. But artists and writers and musicians like your dad are helpless to resist the dark side’s pull. … It’s our job not to turn away from it.”

“The Book of Form and Emptiness” offers an unflinching and in many respects magnificent tour of that dark side. If the Book feels the need to natter on about courage and whatnot, I guess I’ll just make like Benny and try to ignore it.

The Receipts Podcast: 'Men talk about sex openly – why can't we?'