Home » Books » ROGER ALTON selects this year's winners, on and off the pitch

And they’re off! From Frankie Dettori’s rollicking racing memoir to Michael Holding’s raw revelations, ROGER ALTON selects this year’s winners, on and off the pitch

You don’t have to know how to ride to love this fabulous book, but it helps if you love horses. Dettori’s passion for the animals he rides so brilliantly illuminates this memoir. And he had some mounts, too: Enable, Golden Horn, Stradivarius — they were all stars, and he writes about them all with a lover’s tenderness.

But there’s much more than simply horse racing here. In an autobiography as thrilling as any photo-finish, and as compelling as Frankie’s riding skills, he writes with searing honesty about his ban for cocaine, the terrifying moment his plane crashed and burst into flames, and his falling-out with the all-powerful Godolphin stable.

He is also very funny about joshing with the Queen, and reveals exactly where on his body his rival Lester Piggott, angry with this cocky youngster, grabbed him mid-race. Clue: it was very painful. 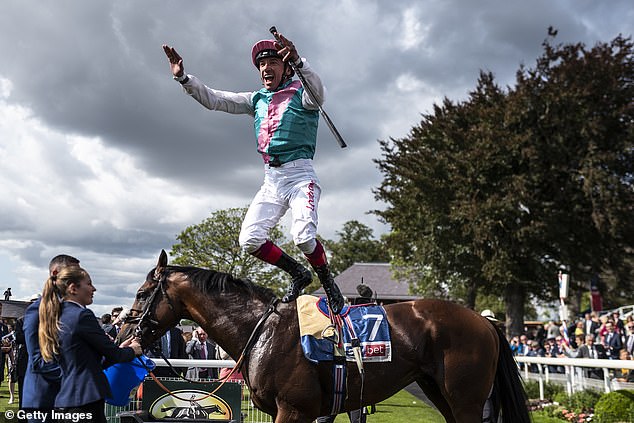 THE MASTER: THE BRILLIANT CAREER OF ROGER FEDERER

The great ‘Fed’ can, for some bizarre reason, be a bit of a Marmite figure, with some benighted folk unable to appreciate his brilliance. The title of Clarey’s exhaustive book will tell you where he stands, though.

Clarey has covered tennis for the New York Times for donkey’s years and has interviewed Federer countless times.

The big question is how this supreme athlete has stayed at the top of his game for so long: the answer seems to be focus and planning, determination and grit, and the fact that his life appears to be a whole load of fun, with friends, family and fellow-pros making sure he never feels jaded.

Superbly researched, you can find out everything you may or may not have wanted to know, including some matchplay advice from his twin girls: look in one direction and hit the ball in the other, they suggest. ‘Not as easy as you think it is, but I’ll try,’ he tells them.

BE GOOD, LOVE BRIAN: GROWING UP WITH BRIAN CLOUGH

Think you can’t face another book about Brian Clough? Well, think again, because you really can’t do without this one. But have some tissues at hand.

Craig Bromfield was just 11, and brought up in an impoverished and brutally abusive household in Sunderland, when he and his older brother, Aaron, were befriended by the football legend, almost on a whim, after meeting him and his Nottingham Forest team while out collecting a penny for the guy.

Clough took the boys into his family — and his beautiful house in Quarndon, ‘like something in Dallas’ — and became Craig’s surrogate father for the next few years, giving him shelter and a unique environment to grow up in.

An inspirational and moving story, and, what’s more, it’s all true. 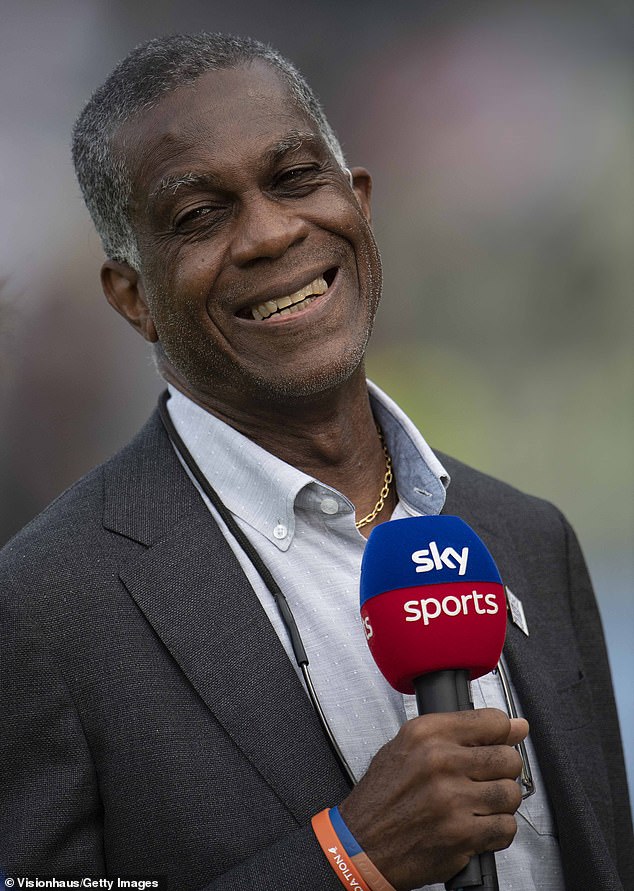 Michael Holding (pictured) shares his story together with many of the world’s most iconic sports stars in Why We Kneel, How We rise

There’s no Welshman (or woman) who doesn’t worship at the shrine of Alun Wyn Jones, the most capped rugby player in history, long-time captain of rugby-mad Wales as well as the British Lions, and one of the greatest, and seemingly most indestructible, players in history.

This is the autobiography of a working man: rugby is his job . . . and he has no thoughts of retiring. As he says, very sensibly: ‘No one counts how many kitchens a carpenter has fitted, or tells a plumber to pack it in when he’s done a certain number of bathrooms. Keep working, keep trying to improve.’

You can see why his teammates over the decades would follow him anywhere. But the glory is also here: walking out in Cardiff to the roars of a packed stadium, with the knowledge that millions more are supporting at home.

Famously reserved as a man and a player, the book reflects that, too. When he returns home after breaking All Black Richie McCaw’s record of caps, his long-suffering wife, Anwen, has some champagne ready. ‘Let’s leave it till tomorrow,’ he says [Wales had been beaten, at home, by Scotland]. ‘A tense evening that one,’ he admits.

WHY WE KNEEL, HOW WE RISE

After former Yorkshire player Azeem Rafiq’s painful recollections this autumn, the issue of racism has dominated coverage of cricket. But arguably a much more significant event happened during a rain break at a Test match between England and the West Indies during lockdown in 2020.

There, in the wake of the murder of George Floyd in the U.S., the legendary West Indian fast bowler and revered commentator, Michael Holding, launched into an explosive monologue about the racism, insults and bigotry he had experienced and seen around him all his life. That was not the end of it.

This book, perhaps one of the most important of the year, and certainly among the most powerful, is the result. Holding shares his story together with many of the world’s most iconic sports stars: Usain Bolt, tennis champ Naomi Osaka, Michael Johnson, Makhaya Ntini, the first Black African to play cricket for South Africa, Thierry Henry and many more. If anything will change the way we see the world it is this — the sports book of the year. 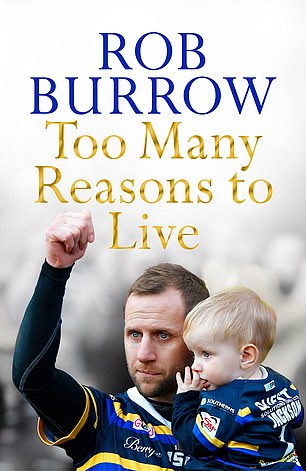 TOO MANY REASONS TO LIVE

If you can read this wonderful book without a tear in your eye then you’re a stronger person than I am. Burrow is one of the most successful players in the history of rugby league, although he is only 5 ft 5 in and weighed less than 11 st in a sport peopled by big, ugly, hard men battering each other.

But his agility, speed, strength and courage made him a legend of the sport, representing Leeds, England and Britain.

He needed even more courage after his world was blown apart in December 2019 when he was diagnosed with motor neurone disease. And they might be tough guys, but his team-mates are also big-hearted, generous and loyal.

Another inspiring story, interspersed with memories from friends and family, and his childhood sweetheart Lindsey, whom he married in 2006. ‘I want to keep fighting till my last breath,’ he says. 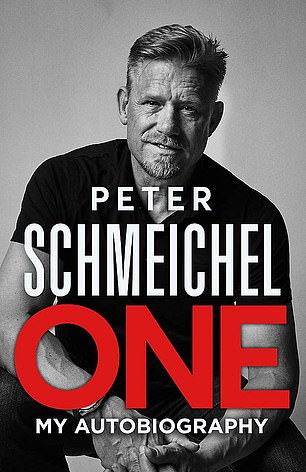 This is much more than the usual footballer’s life story, thanks no doubt to the skills of the highly respected football writer and co-author Jonathan Northcroft.

He’s sensitive, Peter Schmeichel; not just an awesome goalkeeper, but a lover of jazz, family (his son is a Premier League-winning keeper, too) and capable also of dropping names such as the philosopher Kierkegaard as he reflects on his legacy.

It’s warm, frank and conversational in tone; you could be sharing a beer with him in one of his favourite Copenhagen bars.

Rated the best goalkeeper in the world for years, he takes us behind the scenes of Manchester United’s epic last-minute Champions’ League victory in 1999, as well as all the other soccer triumphs with United, and Denmark.

Off the pitch he’s also got a remarkable story about his early life: he nearly died at 15 and had a stormy relationship with his father, who was a Polish jazz pianist, an alcoholic and a spy. Terrific. 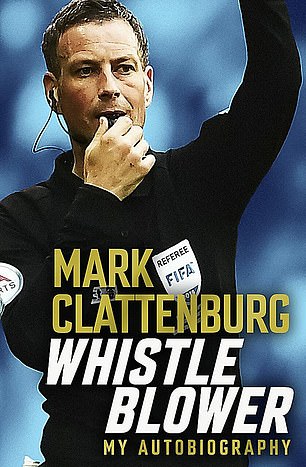 Even those who thought Clattenburg was a good referee would agree he wasn’t a man burdened by self-doubt, and this memoir, written with the Mail’s Craig Hope, is a breezy cruise through Clatts’ highlights, which are, by his own estimate, numerous.

Eventually, with his tattoos and an eye on his public approval, he became almost a parody of the ‘celebrity referee’.

Now he can let rip with a few two-footed tackles: other refs are ‘snide’ or a ‘boring f***er’, a senior official is a ‘slippery, sly toff’, the current crop of Premier League refs ‘has never been weaker’.

If you have ever enjoyed swearing at the man in black (and who hasn’t?) this is the book for you. Worth reading if nothing else for finding out how Clattenburg persuaded Liverpool captain and England star Jordan Henderson to put a sock in it after he had given the ref a mouthful of abuse. He threatened to tell the midfielder’s Mum. Henderson shut up after that. No wonder.

BARCA: THE RISE AND FALL OF THE CLUB THAT BUILT MODERN FOOTBALL 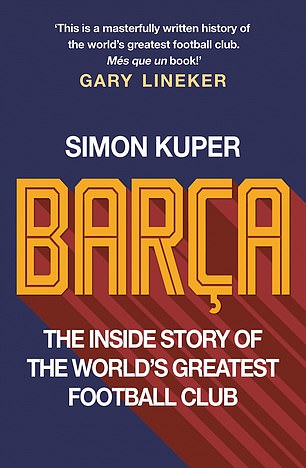 BARCA: THE RISE AND FALL OF THE CLUB THAT BUILT MODERN FOOTBALL by Simon Kuper (Short Books £20, 384 pp)

Kuper has long been one of the most thoughtful and intelligent writers about football. The almost Shakespearean narrative of the rise and fall of the world’s most exciting and inspirational club makes a suitably epic tapestry for his talents.

He charts the story through three remarkable icons of the game: the chain-smoking Dutch genius Johan Cruyff, who redefined the game of football both as a Barcelona player and later a revolutionary manager; Pep Guardiola, who has taken football coaching to new levels first in Spain, then Germany and now Manchester; and Lionel Messi, the best player in the world whose sublime skills have entranced fans for years but whose colossal salary eventually brought the club to its knees. 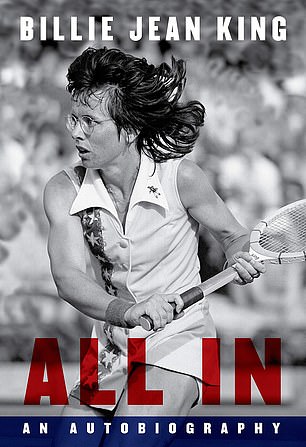 ALL IN: AN AUTOBIOGRAPHY

If anyone can be said to have changed the face of their sport (and much else besides) it’s Billie Jean. A supremely gifted tennis player, as a youngster she came up against the wall of patronising sexism that dominated the sport (‘These girls would be much happier if they settled down,’ opined the U.S. star Stan Smith).

Forced to set up a women-only pro tour (the WTA), she became an icon for women everywhere, beating the ageing player Bobby Riggs in straight sets in the infamous ‘Battle of the Sexes’, and a multiple Grand Slam winner.

Struggling with her sexuality, too, she didn’t formally come out as gay until she was in her 50s, and subsequently began dating the South African tennis player Ilana Kloss.

Now King is a tireless campaigner and activist on gay and gender rights, as well as feminism and Black Lives Matter. A compelling story of a sporting legend and an inspirational human being, it’s a moving love story, too.