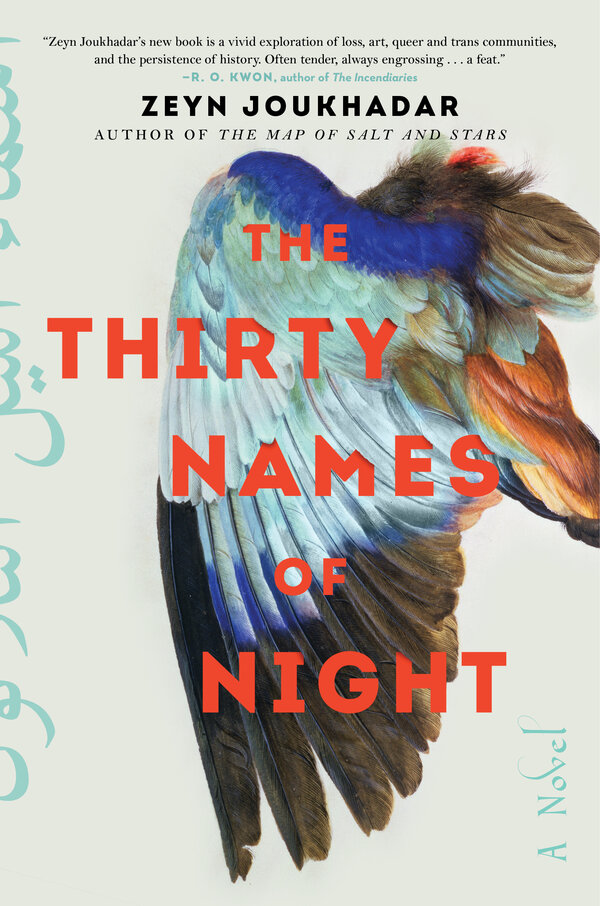 “As long as my body was not for myself, I stopped allowing myself the luxury of wanting,” reveals the anguished narrator of Joukhadar’s “The Thirty Names of Night.”

The 28-year-old inhabitant of that body was born a woman but feels otherwise, and eventually adopts the male name Nadir (Arabic for “rare”). Nadir, who lives in Brooklyn, is falling in love with a man while trying to solve the absorbing mystery of a long-vanished Syrian immigrant painter named Laila Z, whose diary reveals an intimate connection to Nadir’s still-living maternal grandmother. “Her disappearance coincided with the city’s destruction of Little Syria,” he observes, referring to the 1946 razing of much of Lower Manhattan’s Washington Street, historically a Syrian-American hub, to make way for the Brooklyn-Battery Tunnel.

In another narrative thread, one that at times proves distracting, Nadir is haunted by the possibility that the fire that claimed his mother’s life a few years earlier was arson. To avert the demolition of a Syrian cultural heritage building in Manhattan, she had campaigned to turn it into an Islamic community center, drawing death threats.

The author, a Syrian-American who previously published under a different name and has since transitioned to male, embellishes his novel with tinges of magic realism and beautifully rendered descriptions of birds flitting in and out of characters’ lives. Despite a languid pace and a transparent substitution of story lines for plot, “The Thirty Names of Night” stands out for its lyrical quality, its filmic peek into the early-20th-century Syro-Lebanese communities of Manhattan and Dearborn, Mich., and a contemporary protagonist whose self-abnegation stems from an unrelenting sense of bodily imprisonment.

“When I saw a cute girl, the feeling in my stomach, the wave that seemed to take shape there, excited and inspired me,” recounts the young Palestinian-American woman who narrates Arafat’s debut novel, “You Exist Too Much.” “But mostly,” she adds, “the feeling terrified me.”

Arafat begins her book in promising fashion, with an unnamed 20-something bisexual protagonist finally revealing to her mother, Laila, who is visiting her in New York from Washington, D.C., that her housemate is her girlfriend. But the author then mires the ensuing drama in a prosaic and thoroughly middle-class tale of maternal imperiousness and filial resentment.

The novel derives its memorable title from Laila’s admonition that the narrator efface her idiosyncrasies, the better to morph into a version of her mother. What may surprise readers with preconceived notions of Arab women is that Laila cares little for cultivating demureness. As a socialite with class biases, she wants her daughter to land the right kind of boyfriend. The moderately engaging conceit here is that the narrator’s complex regarding her demanding and irascible mother causes her to sabotage romantic relationships with men and women alike.

And in an intriguing but underexploited aspect of the story, her ethnicity is viewed by many as something between a security risk and a demographic challenge. Arafat’s protagonist experiences firsthand Israel’s occupation of the West Bank when she visits Nablus and other Palestinian cities; back in the United States, she encounters numerous Americans “who lump all Arabs and Muslims into one large, threatening category.”

Taïa’s novels often feature a semi-autobiographical gay protagonist negotiating a sex life in a working-class Moroccan milieu. The novella-length “A Country for Dying” is quite different; out of a polyphonic onslaught, Taïa fashions a globe-trotting yet tenuous story.

The author, who grew up in Morocco and lives in France, excels when contrasting the dreams of two of his three main characters, all of whom are North African prostitutes, with the grimness of demimonde Paris. (Taïa writes in French; “A Country for Dying” was translated into appropriately gritty English by Ramadan.) Zahira, one of the protagonists, repeatedly witnesses her male Arab clients being “used by this city that mistreats them with no remorse, and by their white French bosses who exploit them under the table without a hint of guilt.” The other Parisian prostitute, Aziz, insists that he wants to “become the girl I had always been, long before I came into the world,” yet finds himself wrestling with the finality of gender reassignment surgery.

Taïa’s third main character is Zineb, Zahira’s paternal aunt, who strayed from her village in French-ruled Morocco as a teenager and was raped by a French police chief. Thus “dishonored,” she embarked on a life of prostitution. Zineb’s tale is set in 1950s French Indochina, where she tells a client about her fateful past as well as her piteous fantasy of becoming a film star in India. It jars with the stories of Zahira and Aziz, owing to its brevity and altogether different time and place. Nevertheless, Taïa adroitly conveys the sobering message that, whether in the mid-20th century or in the early 21st, sexual stigma is often irremovable, and can even foreclose the possibility of a return home.