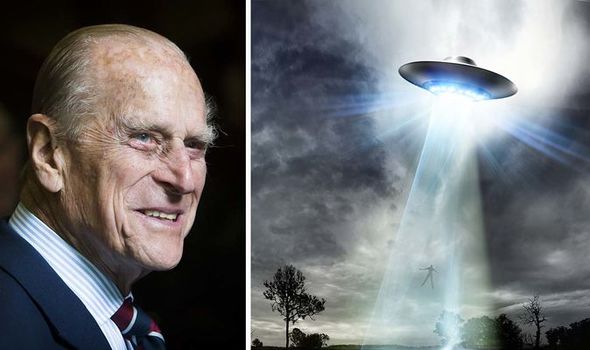 A lifelong UFO enthusiast, the late Prince Philip firmly believed the truth was out there. He subscribed to the journal Flying Saucer Review, studied military reports about the phenomenon, and collected a vast library of UFO books.

He even gathered a secret royal UFO spotters club. Yet in the interests of avoiding controversy, its members conspired to ensure his interest in unidentified flying objects remained one of the last royal secrets.

Although the Duke of Edinburgh served with distinction with the wartime Royal Navy, his real interest was in all things airborne. In April 1953, a new RAF equerry,

He was joined by Philip’s friend and private secretary, Mike Parker, and the most zealous member of the nascent UFO club, General “Boy” Browning, pioneer of Britain’s airborne forces.

After a while, they all became “enthusiastic saucer fans”. On long journeys, royal conversation amongst the team would often turn to the latest science.

Prince Philip’s mind, Horsley recalled, “Was open to the immense possibilities of new technology leading to space exploration, while at the same time not discounting that, just as we were on the fringe of breaking out into space, so other older civilisations in the universe might have already done so.”

The Duke once wrote to UFO hunter Timothy Good: “There are many reasons to believe they exist.”

Philip tasked Horsley to investigate UFOs but did not want this quest to involve his office, “in any kind of publicity”.

Boy Browning, a distinguished general who had once been head of all of Britain’s Airborne Forces, was apt to get carried away though.

As Horsley puts it politely: “Browning began to take it too seriously and perhaps lost some objectivity.” Yet while Browning may have lacked objectivity, he was not short of connections.

One of his friends was a wartime Spitfire pilot, Desmond Leslie, a member of the Anglo-Irish aristocracy who was related to Churchill.

In 1953, Leslie, now a journalist, co-authored a book entitled Flying Saucers Have Landed which sold more than a million copies.

The star of the book was the strange figure George Adamski, a Polish-American, who claimed the previous year he had received a telepathic message telling him to go out into the Mojave desert.

There, he bizarrely insisted, he had met an alien from Venus who brought a message warning Earth of the dangers of nuclear conflict.

In November 1953, Horsley received a telephone call from Fighter Command about a possible sighting made by a night fighter crew stationed at RAF West Malling in Kent.

Having investigated this sighting as fully as the available evidence allowed, he submitted a report to Philip, judging it “perfectly reliable”.

He added that an air defence radar seemed to have confirmed the observation ‑ an object had been plotted at some 63,000 feet at about the same time in the same vicinity.

Later, he read a press report about a BOAC flight to Canada where the captain, crew and one or two passengers claimed to have seen a flight of UFOs.

He obtained the captain’s private telephone number, then arranged an appointment for him to come to Buckingham Palace. He asked him to bring a copy of his written official report.

By early 1954, as a result of such incidents, Britain was in the grip of UFO fever.

In June of that year, the Sunday Despatch newspaper carried a lengthy article by Air Chief Marshal Sir Hugh Dowding entitled: “I believe in Flying Saucers”.

Because Dowding, architect of the RAF’s successful Battle of Britain victory, was a respected military chief, revered alongside figures like generals Montgomery and Eisenhower, people took his views seriously.

Indeed, the subject was so topical that in 1956 BBC Panorama devoted a programme to the growing numbers of reports of flying saucers with astronomer Patrick Moore, host of The Sky At Night and a UFO sceptic, facing off against an RAF team, namely Leslie and Dowding.

Other wartime officers close to the royal family were UFO aficionados, including Freddie Duke of Richmond and Dennis Wheatley, a wartime deception officer and prolific novelist whose thrillers were greatly enjoyed by George VI. But the royals were lurking in the background.

In 1959, George Adamski, now a celebrity of sorts, embarked on a European lecture tour and had already been granted an audience with Queen Juliana of the Netherlands.

After the meeting, the president of the Dutch Aeronautical Association, Cornelis Kolff, reported that the Queen had shown “an extraordinary interest” in the whole subject.

In return, she endured considerable ridicule at the hands of the Dutch media.

Adamski was now coming to Britain to deliver a lecture at Birmingham University. Leslie asked Browning if the British royals also wanted to meet Adamski?

Afraid of similar ridicule, Philip declined, scrawling the words, “not on your nellie!” on the invitation letter, confident there would be negative media headlines if he did so. In the end, two of Philip’s team, Horsley and Browning, met Adamski privately in London.

Horsley was not impressed and worried the whole UFO field was increasingly attracting a mix of entrepreneurs and cranks.

Instead, Horsley did his best to present Philip with high-quality UFO material. He records in his memoir that, as royal equerry, when you wanted something done, “Hey presto, it happened like magic”.

Horsley was given “carte blanche” to read any reports and interview pilots.

Perhaps the strangest outcome of this inquiry was Horsley’s role in inviting a number of flying saucer witnesses to discuss their experiences at Buckingham Palace.

The only doors that were closed to him were in Washington where the CIA refused to share information, even with the royal family.

After Horsley left Philip’s service, he remained silent about UFOs and Buckingham Palace for 40 years. He had returned to active RAF service via its flying school at Manby, Lincolnshire.

Here, in the late 1950s, he served alongside another officer, Kel Palmer, who retired as Group Captain and later joined the defence industry as leading expert in surveillance and reconnaissance.

Palmer spent five years with Horsley, often flying in the same Canberra bomber on deployments to the Middle East and sharing many escapades, yet the latter never mentioned Philip’s interest in UFOs.

The irony was that Palmer was exactly the kind of reliable UFO witness Horsley had been looking to bring to Buckingham Palace.

Palmer recalled a fellow pilot, who had joined his squadron in Germany in 1953, having had a close encounter the previous year over Gloucester.

In 1962, Palmer had an almost identical experience when on attachment to the US Air Force at Hamilton air force base in California.

Early one morning, he was scrambled on an alert and joined an American colleague flying over the Golden Gate Bridge. Directed towards their target by ground radar, the two pilots expected to find a Soviet long-range reconnaissance aircraft.

“Levelling out at 47,000, I watched in awe, mixed with intense curiosity, as two strange shadowy disc-shaped craft flew a parallel track, well above us, synchronised in speed for about two minutes,” he recalled.

Then, with incredible acceleration, the two discs headed west out over the Pacific, disappearing from their radar screens in seconds. After being debriefed by “Some very secretive guys” they were advised to treat the incident as “never happening”.

Private papers reveal royal interest in UFOs remained as keen as ever into the 1970s. By now, the central figure in the royal UFO club was Philip’s uncle, Lord Mountbatten.

In 1977, he was transiting through the airport at Nairobi when he suddenly spotted fellow royal “Bernilo” ‑ Prince Bernhard of the Netherlands.

After a little royal family talk, Bernilo told Mountbatten what was uppermost on his mind. Only recently, on his way to an airport in Italy, he had sighted two “flying saucers”. Mountbatten asked if there had been any witnesses?

His friend replied “Yes”, not only his chauffeur but also two policemen, although regrettably they had not been quick enough to photograph the objects.

Afterwards they had discussed what they had all seen and agreed that the UFOs, which were “not very far away”, were conducting some sort of acrobatic display. He added that he was “simply staggered by what he saw”.

Mountbatten was delighted as, like Philip, he was a confirmed UFO enthusiast. Of all the royals, it was Mountbatten who was perhaps the true believer ‑ in the 1950s he wrote an official report about an unidentified craft landing at his Broadlands estate in Romsey, Hampshire.

Having got wind of the incident, the Sunday Graphic newspaper wanted to run a front-page story but, just like Philip, Mountbatten was shy about publicity on this subject.

Despite this, during his period as Britain’s longest-serving chief of the Defence Staff, he tried to persuade the Sunday Despatch to allocate a team of journalists to investigate the subject, although he asked the paper to be discreet about his own involvement for fear of adverse publicity.

While also Chief of the Defence Staff, Mountbatten had pressed one of his closest friends, the scientist Sir Solly Zuckerman, to investigate UFOs using Britain’s latest intelligence apparatus.

Mountbatten confessed to Zuckerman that he had long been “fascinated” by flying saucers and asked if they should not be examined further by the Ministry of Defence.

Zuckerman tried to let Mountbatten down gently, explaining that when UFOs made their fleeting appearances there was no scientific apparatus to record what they saw or to test the evidence.

When a giant carcass was discovered on a beach on the west coast of Tasmania with no recognisable head, eyes or flippers, Mountbatten sent the details to Zuckerman asking him to consider whether this was “a sea monster?”

Mountbatten wanted a proper defence probe with the Zoological Society. Zuckerman investigated and reported that it had been determined to be “a lump of whale meat”.

Similarly, Philip encouraged Zuckerman to investigate the existence of the Loch Ness monster. The timing was rather bizarre, coming at the height of the Cuban Missile Crisis, but Zuckerman declared the question open. Unfortunately for Philip, the navy blocked his requests for further investigation. They had more pressing real-world matters.

The royals loved the latest science and kept remarkably open minds. They used their special access to intelligence and defence science to investigate these phenomena.

But they feared ridicule, and those around them did their best to hide the existence of the royal UFO watchers club.

Later, as other equerries came and went, they penned polite memoirs about their time assisting Philip and were rewarded with forwards written by royals heartily recommending their books. Here, predictably, all references to UFOs were airbrushed away.

The Secret Royals: Spying and The Crown From Victoria To Diana by Richard J Aldrich and Rory Cormac (Atlantic, £25) is out now.

Ellen Oh’s New Middle Grade Novel Is Not a Fantasy