Home » Books » Pottery so perfect it even makes the judge cry!

Pottery so perfect it even makes the judge cry! Star of The Great Pottery Throw Down Keith Brymer Jones reveals how making art from clay became his haven in a memoir

BOY IN A CHINA SHOP

For its fans, The Great Pottery Throw Down is an oasis of calm and niceness: an hour of ‘comforting balm’, as the Radio Times called it, which has achieved cult status over the course of five series.

For the uninitiated, the show involves a dozen amateur potters competing to create objects ranging from plates and garden ornaments to teapots and even, on one memorable occasion, ceramic toilets. 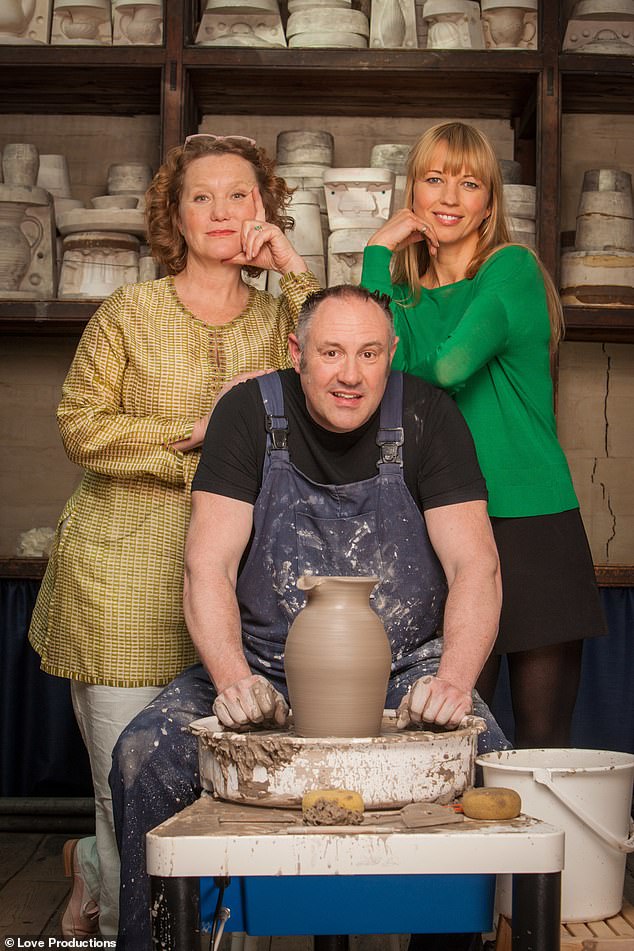 The pottery is impressively accomplished but the most compelling reason to watch is judge Keith Brymer Jones, surely the most lachrymose man in Britain. What gets him sobbing isn’t a contestant vowing to win it for his or her recently deceased granny — tear-jerking back stories are kept to a minimum — but a great piece of pottery or an inspired design. And just as Bake Off contestants vie to win a Paul Hollywood handshake, Throw Down potters compete to make Keith cry.

Brymer Jones grew up in a North London suburb. Bullying and his undiagnosed dyslexia made school a miserable experience, but all that changed on the day he was given some clay during an art lesson. ‘Just looking at this lump of clay washed away all the anxiety I usually felt when asked to do anything in class,’ he writes. ‘It felt amazing, like I was holding my own imagination there in my hands.’

His teacher let him work on his pottery at lunchtime and the art room became his safe haven, even after the school bully sneaked in and put razor blades in the clay. ‘The clay went pink, and so did my hands . . . the room was kept locked after that incident and I was given a key.’

After leaving school, Brymer Jones went to work at a pottery outside London, spending most of his day hauling clay around. ‘I was as green as the first leaf on a sapling tree,’ he says, ‘but what I did have was almost boundless energy and enthusiasm for learning the craft.’

He made homeware for stores such as Heals and Habitat — he would even make some of the deliveries himself in case the courier smashed the load — but soon cheaper ceramics from companies like Ikea were squeezing his handmade products out of the market. To keep himself in business he came up with his own signature range, a white porcelain ‘bucket mug’ with words stamped on it, like ‘Gorgeous’, ‘The Boss’ or ‘Love’. When he first took the mugs to a trade fair he came back with £35,000-worth of orders.

‘I knew I was on to something,’ he says. The range is still a worldwide bestseller today. 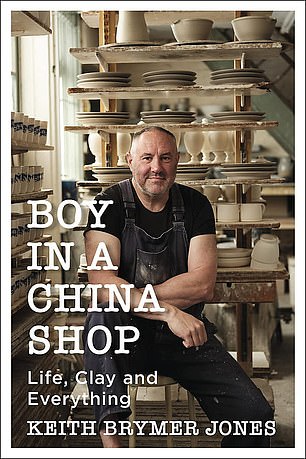 As a publicity stunt, Keith made a magnificently weird spoof video of Adele’s hit song, Rolling In The Deep, called Rolling Clay With Keith. His then wife told him he had committed career suicide, but it brought him to the attention of the team making The Great Pottery Throw Down.

His frequent tears have made him a star on the show. He says he is embarrassed by his crying, but the director loved it. ‘Whatever you do, don’t stop crying!’ she begged him. ‘It’s TV gold.’ Fans of Throw Down will enjoy this warm autobiography, while others may find it a touch bland. You won’t get any great insight into the making of the programme, and Brymer Jones is guarded about his private life, although he does reveal he spent part of lockdown making a dinner service for his partner.

The Great Pottery Throw Down is filmed in Stoke-on-Trent, a tribute to the area’s history of pottery making.

Brymer Jones is justifiably proud that the programme has helped raise the profile of British pottery, showing just how much effort and artistry goes into making a piece by hand.

What makes him happiest of all — and one can imagine his eyes filling with tears as he wrote this — is that a new generation has suddenly discovered that ‘pottery is cool’.

From Venus to Medusa, How Art Codifies the Objectification of Women