Home » Books » Played for a fool by Hitler, Neville Chamberlain took solace outside

Twitcher at No. 10: Played for a fool by Adolf Hitler, Neville Chamberlain’s staff worried he might have a breakdown – instead the PM found solace spying on nature

The wheel had turned, and, in a matter of a few weeks, Prime Minister Neville Chamberlain had gone from the hero promising ‘peace in our time’ to the villain whose attempted appeasement of the rapacious Adolf Hitler had failed.

He sought solace from the storms of high office not in drink, as others might have done, but by slipping out of the back door of 10 Downing Street and scurrying to the ornamental lake in nearby St James’s Park to look for birds. Chamberlain was a twitcher.

In early 1939, as the crisis of impending war in Europe deepened and the agreement he’d signed at Munich gradually turned to ashes, his furtive trips to the park, with binoculars stuffed into his coat pocket, his trademark homburg hat and umbrella left behind for fear of being recognised, became more frequent. 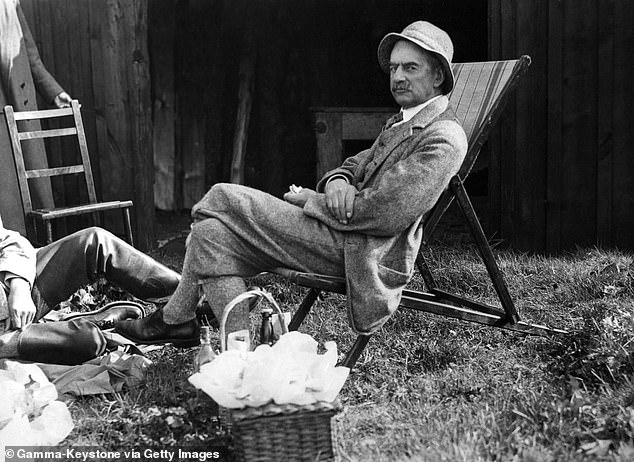 Neville Chamberlain as the guest of Lord and Lady Rushcliffe at the Drumnadrochit Hotel on Loch Ness in Scotland in 1936. His love of nature has been documented in Nicholas Milton’s book Neville Chamberlain’s Legacy

He was thrilled to spot a wading sandpiper, a rare winter visitor to these shores, and an even rarer scaup diving duck.

And, though his political world was crowding in on him, he made time to instruct his secretary to write to a fellow bird enthusiast with news of the sightings.

His staff decided not to interfere. Given the pressure he was under — with Hitler in full cry in Germany and politicians at home baying for his blood — they worried he was heading for a nervous breakdown. If a bit of harmless birdwatching, focusing on a heron rather than Hitler, was his coping strategy, then so be it.

One morning he recorded seeing a kestrel in the park with a sparrow in its talons and watched as it flew into a tree to eat it.

He again passed this titbit of information to his ornithological buddy, though the symbolism — that here was his own situation in a nutshell, with him as the sparrow — seems to have escaped him.

Self-awareness was never one of Chamberlain’s talents. He was a workmanlike politician — no more — but he kidded himself that when it came to dealing with low-lifes like Hitler and Mussolini, he had an infallible touch and could woo them into acquiescence. 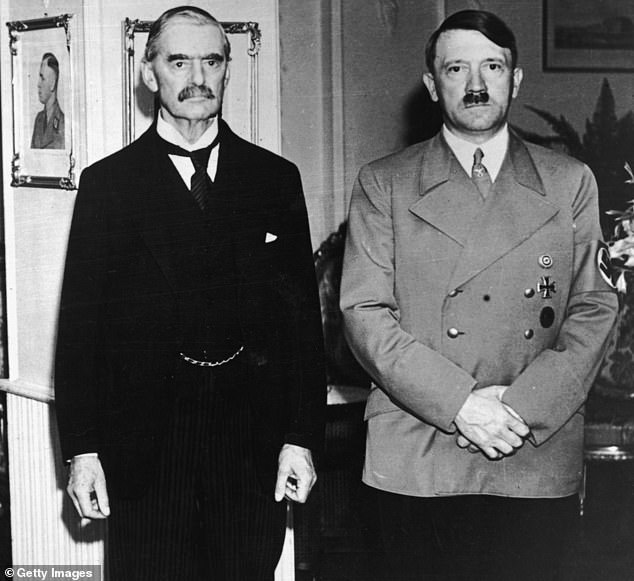 The PM stood next to Adolf Hitler in September 1938 at Bad Godesberg in Germany. Chamberlain was played as a fool, says Mr Milton

He was deluded about his own powers of persuasion. They played him for a fool, and that is the way history will always judge him.

Yet there were many other sides to Chamberlain, as this new biography reveals.

From boyhood he was a lover of nature. Butterflies and moths were his first enthusiasm and, at 11, he was keeping a written record of all those he found in the fields and woods of Highbury, the 30-acre family estate in Birmingham.

He came from high-flying political stock — father Joseph and half-brother Austen were MPs and ministers — but that had the effect of putting him off.

He told a schoolfriend at Rugby of the unbearable tension at home when his father was preparing a speech and everyone had to tiptoe round him. 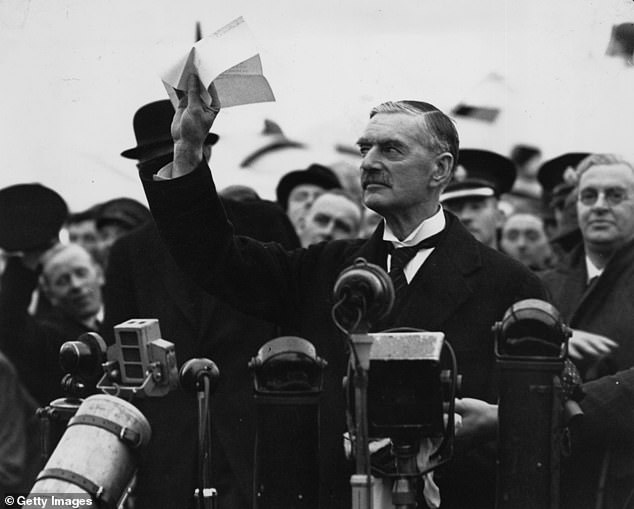 ‘I never shall take any interest in politics,’ he declared, preferring the collection and quiet contemplation of his bugs and birds, on which he was soon an expert. His resolve didn’t last.

‘Despite his reservations, he was drawn into the family business, becoming lord mayor of Birmingham like his father, then MP for the city.

He eventually climbed higher than all of them, making it to Downing Street, first as Chancellor of the Exchequer, then as Prime Minister.

As a politician, he was dogged and humourless, known (and even admired in some quarters) for his cold manner and his attention to detail.

For a while they were worthy talents in those turbulent inter-war years but insufficient when the crunch came. He lacked the passion, the drive and the creativity of a Lloyd George or a Winston Churchill. 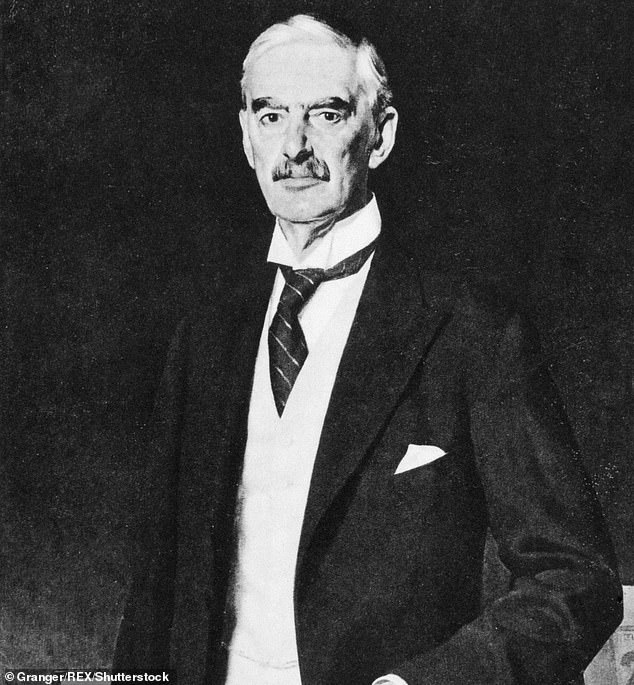 An oil on canvas painting by James Gunn of the Prime Minister in 1938. The latest biography is based off letters sent to Chamberlain’s sisters

Nicholas Milton bases this new account of Chamberlain’s life on the copious letters he wrote to his sisters, and they reveal that, beneath the surface of this sombre man, there was indeed passion — for the pastimes that continued to fill his private life while he struggled with a world careering towards all-out war.

Butterflies, birds and nature in general were what stirred his emotions. He delighted in having a species of butterfly, which he collected while living in the Bahamas as a young man, named after him — Chamberlain’s Yellow (Pyrisitia chamberlaini) — and having an article published under his name in The Countryman magazine about the blue tits nesting in the Number 10 garden.

He confessed to his sisters the thrill of a stolen afternoon away from Westminster, to see the magnificent magnolias and the irises in the new alpine house at Kew Gardens. 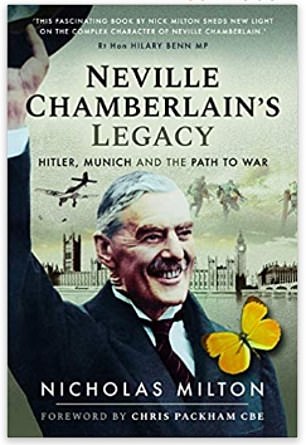 Most of all he loved retreating to Chequers, the PM’s country residence. ‘What a joy and a relief it is to get down here, among the white and purple violets, primroses and daffodils. I found a thrush’s nest yesterday with four eggs’.

He was an active gardener there, planting walnut and tulip trees, sawing logs, finding himself refreshed by the physical activity.

What is fascinating about this book is its reminder — one that biographers can often sideline — that our leaders are human like the rest of us.

They have lives and personalities apart from the job. They are people as well as players on the big stage.

It doesn’t always apply. Churchill and Mrs Thatcher defined themselves by the job. They loved the fray and never wanted to be outside it.

No consoling walks round the park for them, communing with nature, just the next battle to fight and win. But they were exceptional beings.

Churchill unkindly dismissed Chamberlain as ‘the narrowest, most ignorant, most ungenerous of men who knew not the first thing about war, Europe or foreign politics’.

But he was a man, for all that.The fact that he loved the beauty of wagtails and red admirals does not make up for the failed policy of appeasement, but it’s a tick in his favour as a human being.

Winds of Winter: George RR Martin made THIS decision ‘very late into A Dance with Dragons’