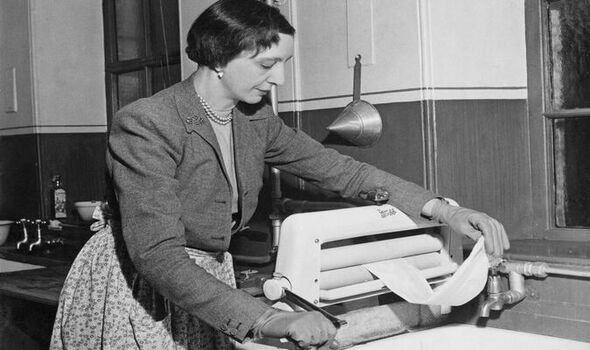 “And I’ve been obsessed with her for years now,” says Fern, 64. “But I didn’t feel I had the experience to write a fictionalised account of her story. Until now.” The pandemic helped. “I refer to it as my lockdown liberation. It gave me the chance to read a huge pile of 20th century royal history, a particular passion of mine.”

“Because, truly, you couldn’t make it up. And I think Crawfie – as she was nicknamed – got a raw deal.”

Her husband, George Buthlay, signed a contract on her behalf with the American magazine publishers Bruce and Beatrice Gould, owners of the Ladies’ Home Journal. Crawfie, perhaps naively, agreed to write her book, The Little Princesses, believing that the Queen Mother (as she became) had given her blessing to the project.

“She was accused of selling out,” explains Fern, “and banished to outer darkness. Well, I bought a copy of the book on eBay and it’s absolutely charming.

“Although I’ve since discovered that the editing of it by the Goulds included invented conversations which would clearly have upset the Royal Family.”

The irony is that Crawfie thought she was helping the Queen Mother.

After the war, an anti-British feeling began to gain ground in America because the King and Queen had not travelled to the US to thank the Americans for sending their boys over to help Britain win the war.

Fern says: “The Goulds somehow inveigled their way in to talking to the Foreign Office where they suggested that perhaps someone – the King and Queen, even – could share some harmless anecdotes about behind-the-scenes at Buckingham Palace, a gentle public relations exercise to endear the British royals to an American audience.”

It was quickly made clear that the King and Queen could not be seen to be the source of these stories but, in time, Marion Crawford’s name cropped up.

Someone was then dispatched from the States to record Crawfie’s thoughts which eventually ended up both in book form and as occasional articles in Ladies’ Home Journal. The Palace reacted with horror.

Having immersed herself in Crawfie’s story, how does Fern view her today?

“She had a good heart and was full of good intentions. She was an excellent governess, an intelligent woman who was very interested in teaching the young princesses about the wider world.”

Set against that, says Fern, she seems to have been easy to manipulate – by her opportunistic husband (a man who liked a drink) and the persuasive Goulds. “She let them persuade her that the Queen Mother was smiling on the book project.

“By the time she found out otherwise, it was too late. Crawfie was quite literally removed from the royal Christmas card list.

“I think she deserved better. Nothing she did was done with malice aforethought.”

Fern’s challenge was to take the known facts and then weave them into a work of fiction. This involved, of course, having to invent private conversations.

Was she comfortable with that? “Well, apart from the Queen, none of the people in the book are alive any more.

“But I had Crawfie’s book as a guide, even if some elements had been doctored, as well as the wonderfully gossipy diaries of Tommy Lascelles, Private Secretary to George VI and subsequently to the current Queen.”

Has anyone close to Fern read A Good Servant? “Yes, both my girls.” Grace, 25, is her daughter by her first husband, TV executive Clive Jones. She has just bought a house near her mother in Cornwall and works at a restaurant just outside Padstow.

She loved the book, as did Winnie, 21 in August, from Fern’s second marriage to TV chef Phil Vickery.

“She’s very handy. But I can sense that she’ll soon be ready to fly the nest.”

Grace’s elder twin brothers, Jack and Harry, are 28 now and working away from home. “But they don’t like me talking about them in print.”

There are no grandchildren yet “although I’m growing my grandmotherly bosom”, says Fern. But Grace has a dog. “And he’s the closest I’ve got now to a grandson.”

Publicising the book apart, she currently has no television work lined up.

“But I’m waiting to hear from Channel 5 whether they’d like another series of Watercolour Challenge. I love working on TV but I did have 30 years of live telly so perhaps I’ve used up the fuel.”

In the meantime, she has a contract to write three more books.

“For the next one, I’m going to have to revisit my Cornish novels.

“There are characters there who still need to be picked over. People come up to me to ask what’s happened to Queenie, for instance. Now Crawfie has been put to bed, my mind is filling with my old cast.”

Crawfie has also given her an appetite for fictionalising the story of someone else very prominent in her day.

“She’s no longer around which will make it easier.” She won’t, of course, reveal her identity. “Let’s say she was a woman who accompanied many of us throughout our childhoods.”

Fern has made clear her professional plans. What are her personal ambitions?

“I want to find joy in living the life I want to lead. I no longer have to answer to anyone else though you never stop being a mother.”

After 20 years together, Fern and Phil decided to go their separate ways in January 20. Their joint statement at the time said they’d decided to “follow different paths.”

So what happened? “There comes a point when the children are off your hands and you look at each other and wonder where you’re going to go from here.”

In the event, Fern has remained in Cornwall while Phil has decamped to the converted farmhouse they shared in Buckinghamshire.

“But he’ll never stop being Winnie’s father. The dynamics are still working equally and warmly.”

“Ten years ago, I’d never have predicted it would end like this although gradually we realised we were running out of road.”

“But we didn’t hit a brick wall. Suddenly, we both said out loud what we were feeling – and that was it. He lives 300 miles away and, as far as I know, hasn’t met anyone new. As for me, I’m not even looking.”

“Nor is there a queue of suitors at the door which I find incredibly liberating.”

“The world has opened up again. I long to do a bit more travelling.

“I’m a free agent which is lovely, although it can be a double-edged sword. I miss the opportunity of talking through a problem, whatever it is, with the person you’re closest to, just to get their take on it. So I talk to the cats who usually have the answer.”

“But I’m very lucky in that I have a group of close girlfriends I can open up to.

Their Publishing Imprint Closed. Now They’re Bringing It Back.