Home » Books » New in Paperback: ‘The Bass Rock’ and ‘The Lost Pianos of Siberia’ 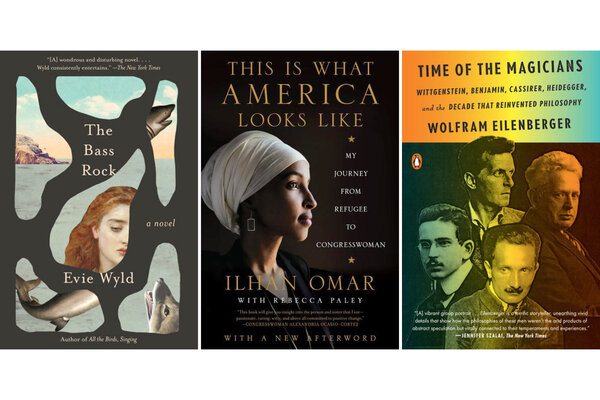 THE BASS ROCK, by Evie Wyld. (Vintage, 368 pp., $17.) Haunted by “a sense of impending violence,” Wyld’s “wondrous and disturbing” third novel is set on the eastern shore of Scotland near the island of volcanic rock from which it takes its title. It plumbs “the base, shadowy havoc that is masculinity,” John Williams wrote in The Times, and “the complications and saving graces of female companionship.”

THIS IS WHAT AMERICA LOOKS LIKE: My Journey From Refugee to Congresswoman, by Ilhan Omar. (Dey Street, 288 pp., $16.99.) Having struggled with racism, financial hardship, unplanned pregnancy and single parenthood, Omar may be “more representative of the average American than her colleagues” in Congress “who’ve lived here since birth,” Christina Cauterucci noted in her review of the Somali refugee’s memoir.

TIME OF THE MAGICIANS: Wittgenstein, Benjamin, Cassirer, Heidegger, and the Decade That Reinvented Philosophy, by Wolfram Eilenberger. Translated by Shaun Whiteside. (Penguin, 432 pp., $19.) This “accessible and deeply human” portrait of four “notoriously incomprehensible” thinkers, as our reviewer, John Kaag, described them, posits that “intellectual magi” met interwar turbulence by conjuring “a new world.”

THE LOST PIANOS OF SIBERIA, by Sophy Roberts. (Grove, 448 pp., $18.) A quest to find a piano for a German friend’s young protégé in Mongolia becomes, as our reviewer, Sophie Pinkham, put it, “a travel narrative in which Siberia’s sublimely harsh natural setting, brutal history and exotic folk traditions are placed in contrast with the great percussive symbol of European civilization.”

FALLOUT: The Hiroshima Cover-Up and the Reporter Who Revealed It to the World, by Lesley M. M. Blume. (Simon & Schuster, 288 pp., $17.) While our reviewer, William Langewiesche, disputed the subtitle’s claim of a cover-up, he praised Blume’s tirelessly researched, beautifully written account of John Hersey’s unequaled reporting on the dire consequences for humanity of the 1945 U.S. nuclear attacks against Japan.

AFTERLAND, by Lauren Beukes. (Mulholland, 432 pp., $16.99.) Sprung from a government research facility, a preteen boy (one of the few males left in the aftermath of a pandemic known as Manfall) is on the run with his mother to Florida for sea passage to their home continent of Africa. Our reviewer, Stephen King, called this futuristic “neo-noir, coast-to-coast chase novel” “splendid.”

The brazen burglar who never breaks the law