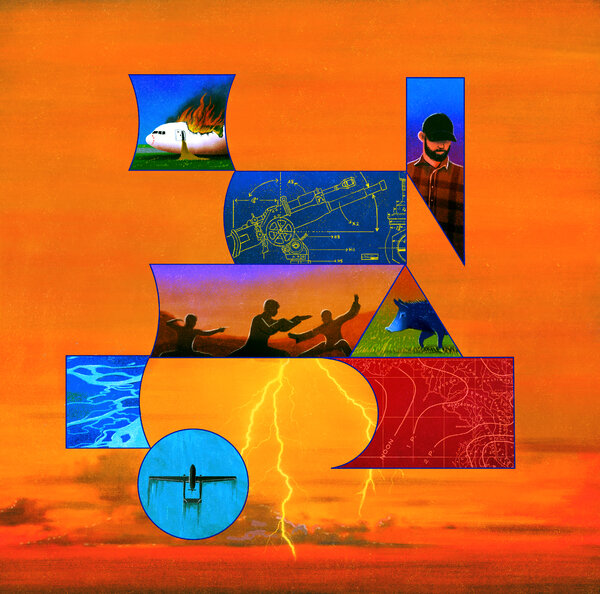 We open on the queen of the Netherlands crash-landing a private jet on a runway in Waco, Texas, immediately precipitating a massacre of feral pigs.

It is, as far as beginnings go, fair warning: Neal Stephenson’s work might be deeply rooted in and informed by the blurriest edges of scientific inquiry, but a fundamental weirdness marks his fiction, often in a way so glaring yet unexpected that some readers will pick up his books just to see what the damn things are about. His latest — the 700-page climate-fiction opus “Termination Shock” — begins with a kinetic mania that feels very much in keeping with the opening of “Snow Crash,” Stephenson’s breakthrough novel and the book that perhaps best established him as a kind of speculative polymath, a hadron-collider of a mind.

But those feral pigs have barely turned cold before “Termination Shock” goes in a very different direction — 300 pages or so of mostly exposition and character back story, the price both reader and author must pay to construct the load-bearing narrative beams of Stephenson’s audacious future.

As you’d expect from a novel that spans just about every time zone on the planet, “Termination Shock” is about a lot of things, perhaps the most central of which is the intersection of hubris and technology, that place where the Anthropocene’s prettiest chimeras reside. Set in the near-ish future, the story charts a world gone haywire with the aftereffects of human-driven climate calamity; storm surges routinely inundate, hot seasons kill, entire swaths of the planet are becoming unlivable. Rather than try to mitigate the interventions that caused this mess in the first place, a Texas truck-stop baron named T. R. Schmidt has another idea — even more intervention, this time in the form of a huge skyward-pointed gun, designed to fire atmosphere-cooling sulfur into the air. As with almost all of Stephenson’s work, there is plenty of real-world bedrock on which he builds his fiction. Sulfur in the atmosphere can indeed theoretically cool the planet, though it can do a lot of other things too (most of them not particularly compatible with a healthy environment).

Winds of Winter release date: Will George RR Martin finish it in time for Worldcon?

Life Is Short. What Are You Going to Do About That?