Home » Books » Like Riding a Bike: A Middle Grade Novel Asks, What if We Do Forget How? 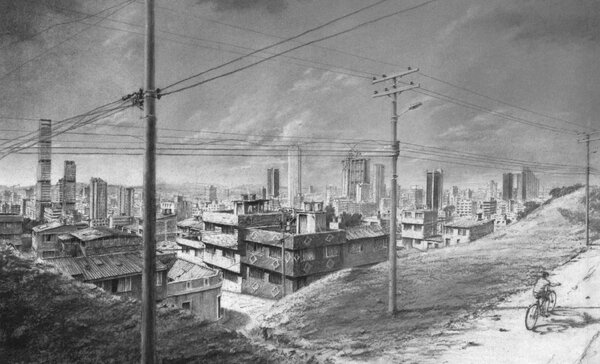 In this dual-language novella, the Colombian author Alejandra Algorta tells the story of Fabio, whose mother, a baker, trades eight bags of homemade bread for a girl’s salmon-colored bike. She removes the handlebar ribbons and gives the bike to Fabio. His bus driver father teaches him to ride, assuring Fabio as he runs behind the bike, “Even if I let you go, I won’t let you go.”

Fabio overcomes the stigma of the girl-bike provenance, and discovers his worth and identity. On the bike, he delivers his mother’s bread, empowered. He has been released from Bogotá’s outskirts and from his pedestrian neighborhood to the dust and danger of the monster city, his world new and exciting. “Strangely for Fabio,” Algorta writes, “the neighborhood through which he journeyed on his bicycle was much more illuminated than the one he walked, was warmer, more fleeting, softer, more bird than cage.”

Now, on wheels, he is flying and free, and often trailed by a pack of children on their own bikes. Within a few years, as he grows stronger and his intuitions on the bicycle flourish, he becomes a mythical leader. It is whispered that he is “half boy and half bicycle.”