Lessons from a lone yachtsman: He was the first to sail round the world solo without stopping — plunging through tempests and shooting sharks that came too close. Fifty years on, Robin Knox Johnston’s dramatically epic account is a glorious antidote to our navel-gazing age

A WORLD OF MY OWN

We live in a world of maximum connectivity, where you can sit in Abu Dhabi and do keyhole surgery on someone in Aberdeen; where a Twitter frenzy in Kenilworth can be picked up in seconds in Kyoto; and where round-the-world sailors can Facetime their children in class from anywhere. But it wasn’t always like that.

Now the nautical publisher Adlard Coles have had the enterprising wheeze of reprinting the story of one of the greatest sea adventures in history for a modern, young audience.

In an age short of heroes, make no mistake: Robin Knox-Johnston is a hero for all time. Just over 50 years ago he sailed his battered 32-ft ketch Suhaili into Falmouth harbour — and into legend. He had become the first person ever to sail round the world single-handed, without stopping. 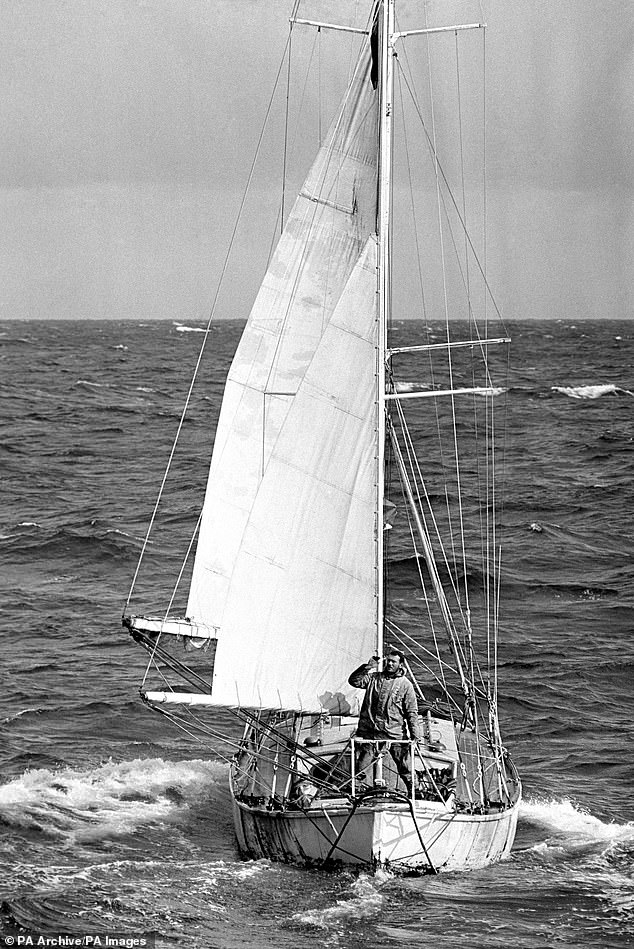 Sir Robin — he was knighted in 1995 — had covered more than 30,000 miles in 312 days on his own and his little boat had taken a fearful pounding from the wild seas of the Southern Ocean.

The paintwork was peeling, the self-steering had gone, the tiller was tied to the rudderhead — but she was still very much afloat. ‘A wonderful boat’, writes Sir Robin at the end of the epilogue. ‘Adventurous’ doesn’t begin to do justice to the man.

This account of the voyage was first published the year he returned, in 1969. There is no hindsight, and the gripping narrative incorporates large chunks from the logbooks and diaries he writes on board. This is courage in the raw, day by day and as it happens.

In an age when young people can get worried about safe spaces if they have to deal with Shakespeare’s plays, it might be good for them to have a sense of one of the most unsafe spaces on the planet. That’s the sea.

If the purpose of this timely reissue is to inspire a new generation of readers, the publishers have succeeded triumphantly.

The trigger for Sir Robin’s adventure was the 1968 Sunday Times Golden Globe Race.

It was a funny sort of race, with no real rules, no official start line and you could set off when you were ready. But the prize was worth having — £5000 — and the achievement beyond price: the objective was to be the first to sail single-handed non-stop round the world. And already some of the best yachtsmen around were circling. 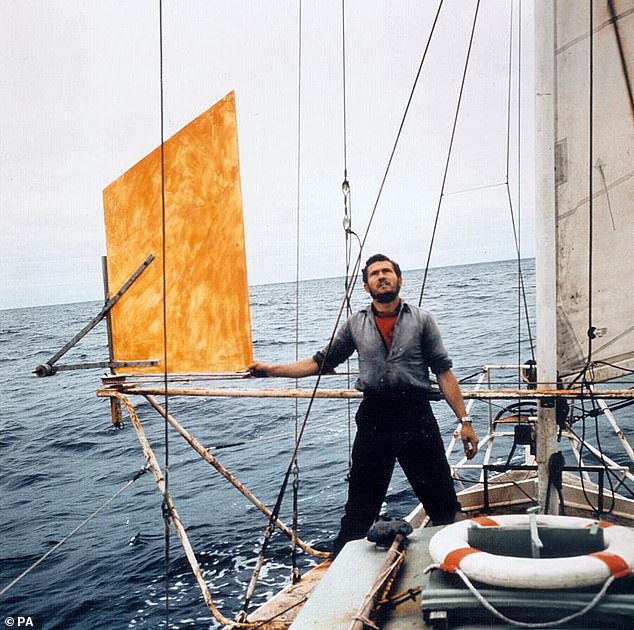 Pleasingly, Sir Robin is a patriotic Englishman of the old school, and very keen that a Frenchman wouldn’t beat him to it. ‘We’d never hear the last of it,’ he writes.

When Eric Tabarly won the 1964 single-handed transatlantic race, the coverage did little for Sir Robin’s blood pressure. ‘I remembered all the fuss in the French newspapers . . . “Frenchman Supreme on the Anglo-Saxon Ocean”, Paris-Match had screamed . . . This had made my blood boil . . .’

In the event Sir Robin needn’t have worried about winning — though he did, endlessly, as his logbooks make clear. He was the only finisher, his rivals having either retired or sunk.

The tragic Donald Crowhurst famously jumped overboard after losing his mind without even leaving the Atlantic. Bernard Moitessier, a French yachting great, abandoned the race after being in a strong position to win.

In an agreeably French way Moitessier, who had the soul of a poet, decided the whole thing was too commercial and just kept on sailing until he got to Tahiti. As you would.

But not Sir Robin. Every piece of misfortune to force him to retire duly happened: polluted water supplies, smashed cabin top, collapsed boom, broken self-steering gear, and no radio contact for months on end.

Sir Robin, who gave all his prize money to Crowhurst’s family, is a man who embodies the spirit of the stiff upper lip. 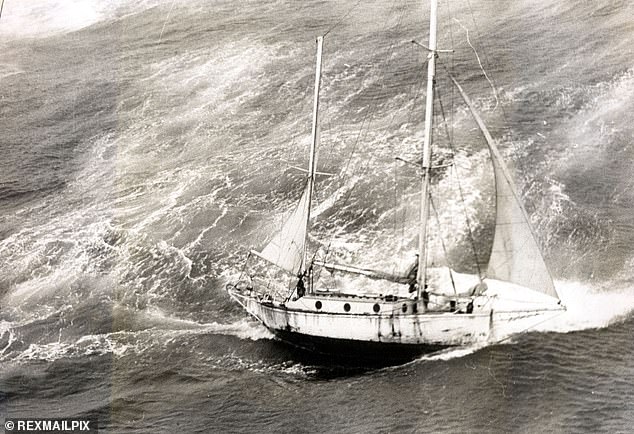 Blessed with immense strength of character, he endures everything the world and the oceans can throw at him with cheerful stoicism, a cigarette or two (Senior Service as like as not), a glass of brandy and a few pages of War And Peace. He is as tough as teak and intensely practical, forever diving into the sea and doing running repairs, coping with constant soakings, adjusting the steering, sewing up a ripped jib.

At one point he jams himself with both feet in the saloon, trying to keep himself upright, and holds the sail between his teeth while he sews . . . only to find he has stitched the sail to his moustache.

He takes an Indiana Jones approach to predators, and when dangerous sharks come too close he simply shoots them. No bother.

The other pressures of course are impossible to see. He has no idea what has happened to Crowhurst, but he knows that his own friends are worried about him ‘going round the bend’ as he cheerfully puts it. But he is much too level-headed for that.

After a month and a half at sea and hundreds of miles from anywhere, he starts to hear voices. Unnerved, he rushes to find the cause: it’s the spoken introduction to a concert playing on his tape recorder. 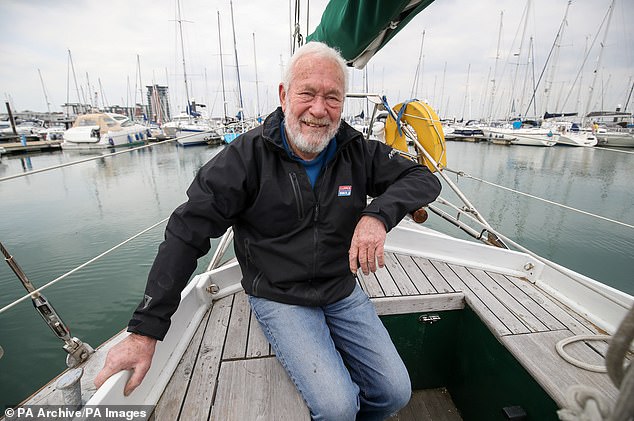 Sir Robin Knox-Johnston (pictured) began hearing voices a month and a half at sea, despite being hundreds of miles from anywhere

Like many such men, Sir Robin is not one to go on about things. This is a terse summation of what must have been a difficult episode as Suhaili is being built: ‘At the same time my marriage was breaking up, and at the end of September my wife flew back to England.’

All was to end well though, and in 1972 he and Suzanne remarried and went on to have five grandchildren. Suzanne died in 2003.

He deals with faith too, but it’s a fiercely practical faith, as you would expect. ‘The rules are there, the physical laws (controlling the sea and the weather) that we have slowly learned. If we obey them we have a chance of survival.

‘It’s no use knowing your boat is heading towards the eye of a storm and praying to God to see you through it safely. That’s not his job . . . If you are trying to do a particularly difficult job and failing time and again, the knowledge that the Lord will assist if you help yourself keeps you going at it . . . and in my experience the job usually gets done.’ 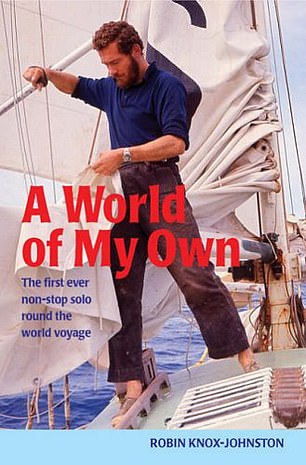 In our shrieky, hysterical age, the proof that less is more comes at the very end of this marvellous book.

After his epic journey, this great adventurer finally crosses the finishing line at Falmouth.

‘The first people to board’, he writes, ‘were HM Customs and Excise . . . The senior officer asked the time-honoured question: “Where from?” “Falmouth”, I replied.’

If I have one tiny quibble, it’s that this is very much a sailor’s book, and as a landlubber who doesn’t know his bowsprit from his mizzen, or his gooseneck from his halyard winch, I would have welcomed a brief glossary of terms.

And some smaller detailed maps to supplement the impossibly detailed map of the world would have been helpful.

But this is a wonderfully inspiring addition to anyone’s library.

Literary quiz 2019, answers: So how many did you get right

Congratulations to Mrs Linda Spevick, of Hertfordshire, who is the winner of the 2019 Literary Quiz and will be receiving a cheque for £1,000!

YOUR STARTER FOR TEN

1. They shared the Booker Prize.

WHAT’S IN A NAME?

FROM THE PAGES OF THE DAILY MAIL

4. (c) Because he thought the Ghost was really the ghost of his own father, Cecil Day-Lewis.

From the Highest Heights to the Lowest Depths, in Photographs