In 1949, when he was in his mid-20s and studying for his master’s degree in English, James E. Gunn submitted a piece of science fiction to a pulp magazine. “One day, I got a letter saying, ‘I like your story “Paradox,” and I’ll pay you $80 for it,’” he recalled in a 2008 interview. “My wife says it was probably the most transforming experience in our lives when we realized someone would actually pay me to sit in front of my typewriter.”

He remained particularly proud of the plot — about a drunken bum abducted by telepathic aliens who, once they read his delirious mind, abandon their plans to subjugate humanity.

Decades later, he ran into Sam Merwin Jr., the publisher who had bought “Paradox,” at a science fiction writers convention. He introduced himself by saying, “You probably don’t remember, but you bought my first story.”

“Merwin said, ‘I can tell you why,’” Mr. Gunn continued, “and I thought, ‘Gee, it stuck in his mind all this time.’ Then Merwin revealed, ‘It was because anything at all literate popped up out of the slush pile.'”

“So,” he added, “you never want to get too pleased with yourself.”

But Mr. Gunn had been so emboldened when his first two stories were published that he went on to make science fiction his career. He edited 10 anthologies of science fiction and wrote about 30 books, including his last novel, “Transformation,” in 2017, and some 100 short stories, including one he submitted shortly before he died in Lawrence, Kan., on Dec. 23. He was 97.

His death, which was not widely reported, was announced by the University of Kansas, where he taught his first English class in 1955 and founded the Gunn Center for the Study of Science Fiction in 1982.

Mr. Gunn’s 1962 story “The Immortals,” about people who discover the secret to eternal life, was adapted into an ABC-TV movie, “The Immortal,” in 1969 and a series in the 1970-71 season. His novels include “The Listeners” (1972), which Carl Sagan described as “one of the very best fictional portrayals of contact with extraterrestrial intelligence ever written,” and which was credited with encouraging research by the SETI Institute into the search for life beyond Earth. 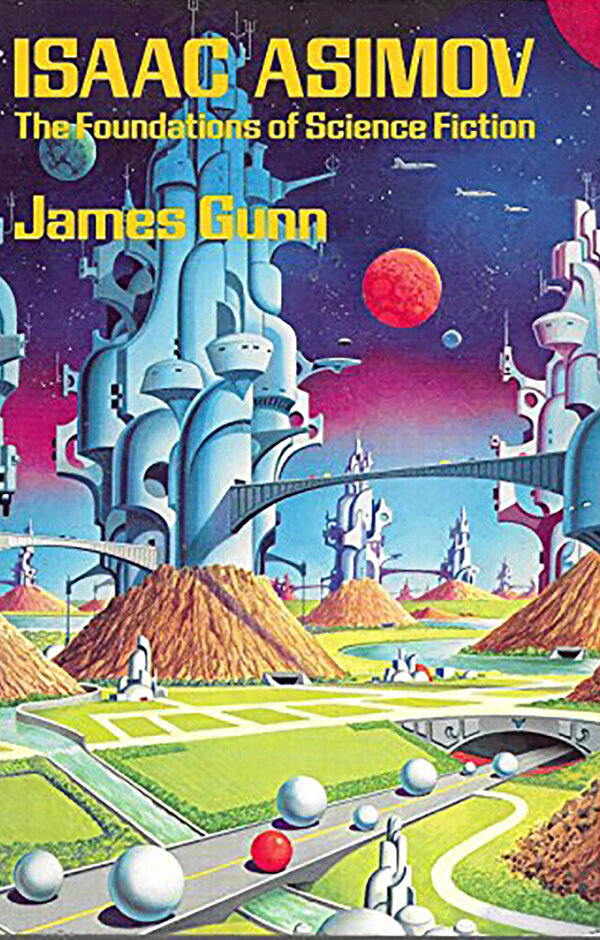 Despite the incentive provided by that first paycheck, Mr. Gunn said in an interview with the University of Kansas in 2017, “I have often made the point that writing is really hard work.”

“Lots of times,” he said, “I’ve sat in front of my typewriter or computer and felt really I’d rather be out mowing the lawn, doing manual labor, than trying to wrench ideas out of my head. But there is also the feeling that sitting there and turning concepts into language that is suitable is what I was cut out to do.”

“I’ve told people,” he added, “that I feel I earn my place here on Earth each day when I am able to create something that wasn’t there before, and, in turn, some of these things enter stories that influence people.”

James Edwin Gunn was born on July 12, 1923, in Kansas City, Mo., to Jesse and Elsie Mae (Hutchison) Gunn. His father was a printer, two uncles were pressmen, a third was a proofreader, and his grandfather was an editor who was said to have visited every county in the country as a representative of the Masons.

As a child, James devoured fairy tales and Tarzan novels. He was inspired to write science fiction as a teenager after attending a speech by H.G. Wells.

He served in the Navy during World War II and as a Japanese interpreter after the war, then earned a bachelor’s degree in journalism from the University of Kansas in 1947 and a master’s in creative writing in 1951.

Mr. Gunn told The New York Times in 2011 that science fiction could speed the future by sparking the imagination of young minds. But he also acknowledged that, as Arthur C. Clarke said, “The future isn’t what it used to be.”

“The science fiction writer’s task grows increasingly more difficult as science and technology catch up to the science-fictional imagination and as old tropes get worn out,” he told Electric Spec magazine in 2007.

But science fiction and fantasy can provide healing escapism, he often said, while the truth can prove to be stranger.

“Certainly the contact with other intelligences would be as exhilarating (or as traumatic) as anything imaginable,” he said in that interview, “and how we respond to that will determine humanity’s fate and maybe its transcendence.”

When Reading Had No End

The right type for a murderous spree