These new works from Tomi Ungerer, Sophie Blackall and Christian Robinson are realistic and — without being soppy — filled with hope.

From “If You Come to Earth.”Credit…Sophie Blackall

Tomi Ungerer, who died in 2019, was a wonderfully idiosyncratic, uncompromising artist whose books never condescended to young readers with platitudes or secondhand morality. His books, in fact, rarely seemed intended for kids at all.

“If all these books still thrive,” Ungerer wrote about his oeuvre, it is because “they broke all the rules applied to children’s books peopled with cushy teddy bears in an illusory world where everyone is nice, happy and stupid.”

Ungerer and Maurice Sendak were friends and contemporaries who shared an editor in Ursula Nordstrom, their bold champion at Harper & Row. They also shared a frustration with the limits of what Sendak called Kiddiebookland — “that awful place that we’ve been squeezed into because we’re children’s book illustrators or children’s book writers. Yes, we are! But isn’t our work meant for everybody? How infuriating and insulting when a serious work is considered only a trifle for the nursery!” 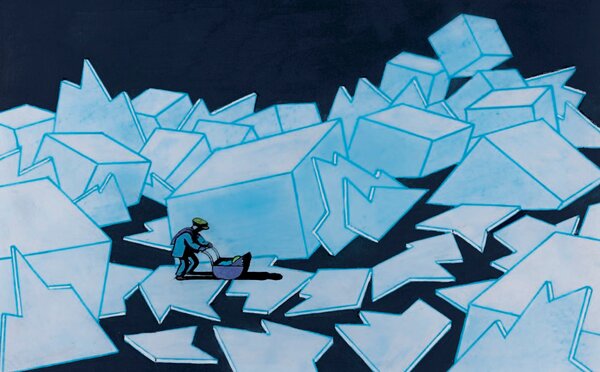 It would be hard to argue that Ungerer’s NONSTOP (Phaidon, 48 pp., $16.95; ages 5 to 8) takes place in Kiddiebookland. For starters, it features no kids. In terms of plot, it depicts the collapse of civilization. I’m not sure it’s a bedtime book for any adult or child, but I am sure it’s a masterpiece.

The protagonist is Vasco, a man in a suit and a cap, his face always in shadow, as he navigates a city and a world falling apart. It begins like this: “Birds, butterflies and rats were gone. Grass and leaves had withered. Flowers had turned into memories. Streets and buildings were deserted. Everyone had gone to the moon.” Vasco is lost and alone in a disintegrating, Hopperesque city. Luckily, his shadow knows where to go, and saves him — “just in time” is the refrain — from explosions and falling buildings (again, not Kiddiebookland).

Soon Vasco meets a sluglike creature called Nothing, who asks Vasco to deliver a letter to Nothing’s wife, who has vanished. Vasco takes on the challenge, surviving a tsunami and a shipwreck before washing up on a grim beach. Above the shore stands a hospital containing only two souls: Nothing’s gravely injured wife and her newborn child, Poco.

Nothing’s wife is not long for this world (still not Kiddiebookland). She dies, leaving Vasco to care for Poco. Together Vasco and tiny Poco pass through surreal landscapes full of lonely menace — frozen seas, dying forests, hungry tanks, empty trains, magma, deserts — before the story has a happy (though not stupid) ending.

The book is dedicated to Ungerer’s brother, Bernard, who, Ungerer writes, “became my guiding shadow after our father died.” That Ungerer, an Alsatian, lived through the German occupation of France seems pertinent, too. In a world now facing environmental catastrophe and a resurgence of fascist sympathies in Europe and the Americas, “Nonstop” could not be more timely. Ungerer has created an all-ages classic, a fitting capstone on a fearless career — and just in time.

At 34, Christian Robinson is still at the beginning of his career, but he has already established himself as one of the world’s pre-eminent picture book artists, with a spare paint-and-collage style that achieves a kind of witty, lyrical sublimity on every page. There are few awards Robinson has not won as an illustrator — working with writers such as Matt de la Peña, Mac Barnett and Adam Rex — but his last two books are solo efforts, and the results are extraordinary.

Last year he published “Another,” in which a girl and her cat discover a portal to another dimension. There, an upside-down version of her and her cat exist. The book, probably the most concise examination of the multiverse ever conceived, manages a balance of levity and metaphysics that is uncanny. It can’t be improved upon.

In lesser hands, his new book, YOU MATTER (Atheneum, 40 pp., $17.99; ages 4 to 8), might be a well-meaning but undelightful pamphlet on self-worth. It is about self-worth, in a way, but it’s also about the history of life on Earth — from the first ocean-dwelling microbes to four-legged creatures leaving the sea for land, all the way up to an astronaut looking down on our blue marble from space. Oh, and in 107 words, it somehow covers loneliness, death and rebirth, too.

Like Ungerer’s “Nonstop,” Robinson’s “You Matter” isn’t meant simply to please or instruct children. His goal is nothing less than encompassing the world through an art form that relies on economy of language and image. Mastery of this art form is very, very tough, and its best practitioners somehow manage to delight kids and adults at the same time — both audiences appreciating the chaos of existence brought temporarily to order. Robinson’s books, like anything perfect, have that rare quality of the inevitable. They had to be. They always were.

Sophie Blackall’s IF YOU COME TO EARTH (Chronicle, 80 pp., $18.99; ages 5 to 8) shares the vast scope of “You Matter,” though its text is more explicit in its grand objective. Her narrator is Quinn, a red-hatted young child based on a real person in Blackall’s life. The real-life Quinn has lived in Nigeria, Indonesia and Nepal, but Blackall met him in her native Australia and saw the globe-trotting young person as a worthy guide. “Dear Visitor from Outer Space,” Quinn begins, “if you come to Earth, here’s what you need to know.” From there, Blackall delivers on the promise. The book seems to contain everything — the world’s every river, flower, person, cruise ship and bottlecap. It covers sight, sound, sickness, conflict and inequality. It is overwhelming.

Like Robinson (and Sendak), Blackall was known first as an illustrator, and has more recently begun creating the text for her books. “Hello Lighthouse,” from 2018, related the story of a lighthouse keeper facing obsolescence, and won a Caldecott. “If You Come to Earth” is more ambitious by a factor of 10. It’s far and away the best work she’s done.

Blackall tackles every page with a different composition, an ambitious visual conceit. There are grids, spirals, close-up two-shots (twins identical but for a mole) and dizzying diagonals (all the world’s means of transportation in one hectic spread). No detail escapes Blackall’s attention, though; close reading is richly rewarded. There are cameos everywhere: Ruth Bader Ginsburg, Ella Fitzgerald, Mariah Carey, Garry Kasparov, a Richard Scarry supercar and the red-suited boy from Ezra Jack Keats’s “The Snowy Day.”

Though its scope is expansive, “If You Come to Earth” feels, in the end, intimate. A number of characters, young and old, recur throughout, giving us the sense of reading a multigenerational family saga — only this is the human family in toto, with seemingly no culture or incarnation unrepresented. The people in Blackall’s world seem content to coexist on a crowded planet, happy to share a park or a train or a feast.

“Many of my first children’s books,” Ungerer said, “were aimed at rehabilitating disreputable animals.” He meant snakes, rats and vultures, but the same might be said for humans. In Ungerer’s last work, and in the work of his successors Robinson and Blackall, people, despite all the trouble we make, can be redeemed. Even if it’s only within the span of a picture book.

Dave Eggers is the author of several picture books, including “Her Right Foot.” His latest is “The Lights & Types of Ships at Night.”

Pushed From the Clock Tower, Buried in the Yard

Blood Heir: Read an excerpt from controversial YA novel