Home » Books » In ‘Fauci,’ a Doctor Whose Work and Mission Have Been Shaped by Politics 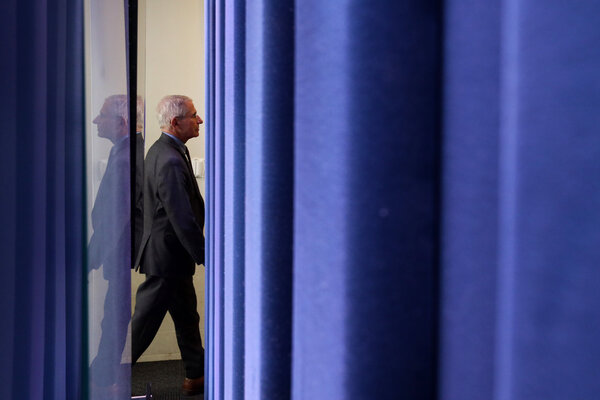 For a moment it appeared as if reality had come home to roost in the White House.

The president, who has long denied the severity of Covid-19, who waved away a question about a thousand Americans dying every day (“It is what it is”), who hawks quackery and discourages preventive measures like mask-wearing, contracted the virus last week, along with several others in his orbit.

Soon, a chaotic, queasily familiar farce ensued. The president’s personal physician admitted misleading the public with his rosy reports on Trump’s health; his chief of staff couldn’t keep his stories straight. Even as confusion persists about the seriousness of the president’s symptoms, when exactly he came down with the virus and how many others he has exposed to it, he breezed out of Walter Reed National Military Medical Center and returned to the White House. On Monday evening, he delivered a macabre video address, triumphantly pulling off his mask and claiming domination over the virus, all the while noticeably struggling to breathe.

In the midst of the clamor and speculation, the occasional forlorn question: Where is Dr. Fauci?

Anthony Fauci has been at the helm of the National Institute of Allergy and Infectious Diseases through the emergence of H.I.V., SARS, avian bird flu, swine flu, Ebola, Zika. He is “America’s doctor,” Michael Specter, a staff writer at The New Yorker, says in his new audiobook, “the essential first biography,” according to its publishers. “We don’t have an actual leader,” Specter said in April. “Fauci is the closest thing.”

Before being sidelined in recent weeks, he was regarded as the adult in the room, with his quaint fondness for facts and evidence-based science. Of recent events, he noted with wry, habitual circumspection: “I think it’s obvious that I have not been involved.”

Biography might be a generous description of this book. “Fauci” faithfully follows Specter’s profile of the doctor published in The New Yorker this spring. The White House tightly controlled his access to Fauci; despite knowing each other for decades, the men were not able to meet in person. It is the story of the public life we receive, delivered in broad, reverent strokes, frank hagiography. Fauci is “the nation’s indispensable man,” “the Enlightenment’s human shield.” (Fauci has paid the price. He and his family have endured death threats from conspiracy theorists accusing him of undermining the president.) There might not be enough fresh revelation or psychological insight to satisfy my nosiness, but Specter shapes the available evidence into a stirring, and very American, morality play.

Fauci was born on Christmas Eve, 1940. The front-page headline in The Times that day read: “President to Give Emergency Facts to Nation on Radio.” A Brooklyn boy, the son of the local pharmacist, he was granted admission to one of New York’s most prestigious high schools, but sports were his first love. At 5-foot-7, however, he found his dreams of a basketball career dashed. The humanities called to him. His family was full of artists, and he took to classical languages and philosophy. Science began to sing to him, too — the thrill of discovery. Medicine could combine the two, he thought — he could interpret science and bring it to people.