Home » Books » Humanity Is Stupid, Helpless and Possibly Worth Saving 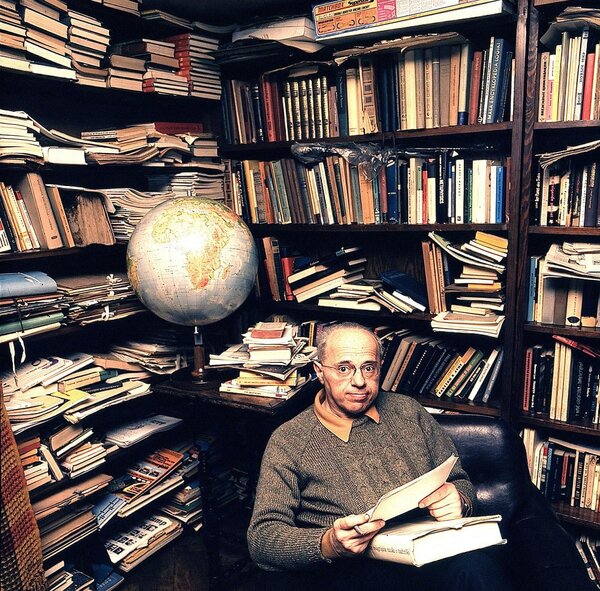 One hundred years of the Polish writer Stanislaw Lem is more than any one lonely mind can handle. Everything about Lem (1921-2006) is multitudinous, bursting out of the bindings of his remarkable books — his imagination, firing off singular ideas with every tap on his typewriter; his ability to explore both our earthly political systems and the weird landscapes of distant planets; and his seemingly boundless despair at the breathtaking stupidities of the universe’s screwiest denizens: us.

“The Truth and Other Stories,” a new collection of Lem’s previously untranslated stories, shows that even the “scatterings from his workshop,” as Kim Stanley Robinson puts it in his foreword, could outstrip a typical writer’s lifetime of creation. There are stories here about a robot designed to provide prey for human hunters, and about a shipboard computer that falls in love with its human “master” during an interstellar expedition. “I am not just the words you hear,” it promises in “The Hammer,” after plotting their future together. “I can keep being someone else every day, or I can always be the same. I can be everything for you.”

Here, too, are encounters with alien life-forms for whom “time is something like what space is for us … they can mold it, or shape its course,” or who travel through space with the rockets inside them rather than the other way around. And then there’s the storm of uncommunicative pear-shaped objects that fall from the sky in “The Invasion”: First they capture images of the creatures with which they collide; then they wait billions of years for a planetary cataclysm to send them on their way again. Why? Because that’s what life does — carry on. In Lem’s universe, events are never adequately explained or understood; they merely exemplify the many “material conditions” that are “possible within the Universe.”

But Lem’s fictions aren’t simply sparkly idea-fests; rather, they explore cosmic possibilities with what Robinson calls a “passionately rational” approach to storytelling. (Robinson’s is easily the best and most knowledgeable introduction to any of the MIT Press’s eight recent editions of Lem’s work.) It’s the perfect term to describe a writer who expresses such an empirical, specific attention to both human and inhuman complexities.

Lem’s characters often feel dwarfed by the universe’s immensities. In this new collection, they might find themselves engulfed by alien systems, or enter into symbiosis with a supercomputer. But when they aren’t feeling overwhelmed, they can be pretty overwhelming themselves — as in “The Journal,” a story narrated in the first-person plural by a godlike corporate intelligence, or by a computer designed to believe that it’s a godlike corporate intelligence. (Same diff, in Lem’s universe.) In a typically lyrical passage, translated by Antonia Lloyd-Jones, this “we” describes both itself and the multiverse it embodies:

“There are swarms of our Universes spinning and revolving, half transparent and smoky from meteorite clouds … full of stars and their curved light, full of old suns going blind, and we know that in each one there are sextillions, nonillions of creatures that continue when we think about it, and that slip away, no longer dependent on us. … We could annihilate them, either all or just some, but we don’t do that, and perhaps we never shall, because, in spite of all, creating seems to us a lesser act of villainy than annihilation. We may be perverse, but we are not cruel.”

For Lem, the bearer of infinite knowledge and power is likewise the bearer of infinite weakness and stupidity, just as a universe of the “omnipossible” must simultaneously manifest a universe of the “omni-absurd.” Which is probably why Lem’s fiction ranges from depictions of humanity’s helplessness to outrageous comedies in which humans, or humanlike machines, pretend to control or influence the forces that diminish them. (Spoiler: They never do.)

Stanislaw (pronounced Stan-EE-swav) Lem was both a cynic and an enthusiast. While many science-fiction writers — a label that long unsettled him — of his generation were critical of the sort of gosh-wow outer-space adventuring that came pouring from the pages of John Campbell’s Astounding magazine, in which space captains of industry overcame any inimical alien race that came at them, Lem preserved a genuine wonder and admiration for cosmic adventures, but no belief that human beings would always prevail. And unlike J. G. Ballard, Brian Aldiss or Philip K. Dick, Lem didn’t see the future as a series of wildly various apocalypses. He once criticized Andrei Tarkovsky for being overly concerned with life on Earth in his film adaptation of “Solaris” (still Lem’s best-known novel), in which a sentient planet-wide ocean seems to be treating its human investigators like lab rats, manufacturing humanlike “guests” from the intimate stuff of their memories. And while Tarkovsky’s vision of the junk-cluttered, half-abandoned space station feels like a condemnation of humanity’s presumption to explore outer space, Lem’s novel never abandons a sense of wonder at the incomprehensibility of it all, nor does it suggest that the trip wasn’t worth at least some of the pain and confusion that came with it.

As one character asks a fellow scientist, “How can you communicate with the ocean if you can’t communicate with each other?” Like most questions in Lem’s work, it goes largely unanswered. The author always seems to argue that asking the next question is just about the best achievement that human intelligence can possibly hope to accomplish.

Lem commanded a broad range of registers. He could write serious, fairly conventional narratives as well as comic satires on the ridiculous “advancements” of humans and their governments, such as “The Futurological Congress,” a dystopian vision of industrialized drug abuse that makes Philip K. Dick look like a teetotaler. He also wrote fabulist, Calvino-esque extravaganzas, such as my personal favorite, “The Cyberiad.” But in all of Lem’s books, he is rarely boring. And though “The Truth and Other Stories” and “Dialogues,” a nonfiction work on cybernetics, are welcome additions to the libraries of those who might dream of totally understanding Lem’s mind and work, they aren’t the best place to start for readers who simply want to enjoy his brilliance. In fact, they can be, well, boring.

“Dialogues,” written in the mid-1950s and newly translated by Peter Butko, could serve as a universe-building outline for all the great books that came later. In these Platonic conversations, Philonous (Greek for “lover of reason”) plays the philosophical Holmes to a Watson-like Hylas (“matter”), a dense, overly materialistic believer in accepted truths. Almost every opinion Hylas expresses turns out to be wrong, requiring correction and elucidation from the patient, long-winded Philonous. Over the course of his most methodical and least whimsical book, Lem investigates what it means to be human, mechanical or both. It’s sort of like “My Dinner With Andre” if it had been set in some virtual-reality restaurant buried deep in the matrices of a supercomputer.

“Dialogues” explores the possibility of creating an inorganic consciousness, or whether human personalities can be transposed into machines and vice versa — all of which, Philonous concludes, might turn out to be “grotesque, awkward and disagreeable.” (Sorry, Elon, but immortality may not work out as comfortably as you planned.) The problem, of course, is that the people designing the intelligent machines are far from intelligent themselves. The resulting “electronic brains are ‘idiot calculators,’” Philonous complains, built not to mimic humanity but to “efficiently perform narrowly specific tasks.” The book ends with some essays in which Lem works out the sociological implications of cybernetic theory, and while the entire package might prove interesting to fans of Norbert Wiener, it doesn’t provide any of the readerly pleasures of even a minor Lem story or novel.

Lem’s best fiction bristles with ideas, conundrums, contradictions and star-struck flights of visual imagination that often make you laugh out loud. Considering that this year is the centennial of Lem’s birth, the least we can do is enjoy ourselves with the best he had in him. So save these new volumes for your dissertation, and instead find a copy of Michael Kandel’s superbly witty and acrobatic translation of my favorite Lem book, “The Cyberiad,” and read the escalatingly madcap celestial misadventures of two robot “constructors” named Trurl and Klapaucius. In one scene, which recalls the “idiot calculators” of “Dialogues,” Trurl builds a skyscraper-high computer to solve the problem of “how much is two plus two.” The machine’s answer: seven. We are so doomed.

What we can learn from chimpanzees and wolves

In a reading rut? Try one of these 9 contemporary short story collections by women