#MeToo: Stories from the Australian Movement

The bold capital lettering on the cover of #MeToo conjures the whole Harvey Weinstein/ Louis CK powerful-entertainment-industry-men-as-sexual-predators hashtag-sensation. But it’s precisely this pop-culturification of the community-based movement, started in 2006 by African American woman Tarana Burke, that I’m hoping will be dissected and examined in this new and diverse Australian anthology 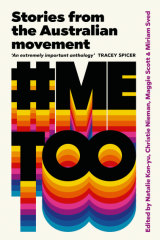 #MeToo: Stories from the Australian Movement.Credit:

The introduction is upfront about the hurdles in compiling it, noting ‘‘challenges of representation, in a movement started by a woman of colour to empower women in underprivileged communities’’ yet falls short of pinpointing Burke as specifically a black woman; a survivor herself; an activist and community organiser from The Bronx.

The challenge of representation, though, in an Australian context, is monumentally slayed in the curation. ‘‘I write to remind you that this place is forever shaped by the stories of Aboriginal and Torres Strait Islander women,’’ writes Eugenia Flynn, in her powerful essay, This Place, that   examines, poetically yet uncompromisingly, the limitations of white feminism on black country and the myriad ways patriarchy, often in the form of colonisation, disproportionately impacts Indigenous women.

Each piece of prose, fiction or poetry in this collection brings something important to the table. Often the authors challenge or investigate historical giants of the Australian feminist movement.

Eleanor Jackson’s nuanced and introspective On Not Talking To Germaine Greer opens with an invitation to Jackson to host an in-conversation with Greer about her controversial essay On Rape and takes the reader through her eventual decision not to appear on stage with Greer. Threaded through Jackson’s decision-making is an illuminating personal essay. ‘‘The first boy who rapes me says he loves me when he finishes. The second boy says he’s sorry, he just needed to stop being a virgin, okay? The third boy must surely be called a man.’’

Timmah Ball’s Difficult Men paints a series of painful interlocking portraits of men who persistently overstep. These characters are chilling in their archetypal ordinariness: we recognise them all. Then, too, this piece is a subversion of the notion of Difficult Women that has preoccupied many contemporary feminist fiction texts. The character Jane philosophises about the title of Roxane Gay’s short fiction collection, Difficult Women. ‘‘Blame remained with women, while men remained in the background. Difficult Men would have been a more appropriate title.’’ 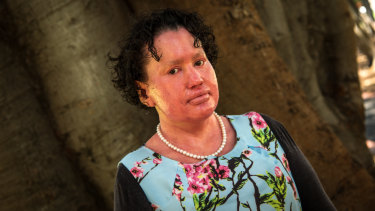 Carly Findlay addresses the issue of abusive behaviour by men within the disability community.Credit:Justin McManus

Here are authors aware of where their work sits in the feminist canon and intent on constructively interrogating that canon. Kath Kenny in her essay #MeToo and DéjàVu speaks of ‘‘(Helen) Garner’s Generation’’ who ‘‘came to feminism as part of a movement that wanted to explore how sexual liberation could increase women’s power’’. She examines the critical fallout on young feminists, after the publication of Garner’s much celebrated The First Stone.

The writers skilfully traverse complex territory, with not so much a tear-down of the feminism of old, but an acknowledgement, a thank you, and a ‘‘Sisters, here, also, is where you might well have done better’’.

#MeToo cracks the facade and lets the light in. Disability and appearance activist Carly Findlay writes on the reluctance of many in the disability community to combat abusive behaviour from men within the community. Shakira Hussein interrogates the way sexism compounds with racism to impact both the public and the authorities’ perspectives on violent or intimidating behaviour by certain men of colour. ‘‘I was told that the stalker-brother’s behaviour was typical of Asian men, that it was part of their culture.’’

Nurses are groped. Male teachers show inappropriate material to young students. Strangers kidnap and sexually assault women. Sex workers campaign for their rights. Female and non-binary musicians take a stand against male-dominated line-ups. Abuse narratives are shockingly unearthed within close-knit families. Older men prey on younger women. The precursor rallies to the Reclaim the Night rallies are born. Well-meaning men fall short in their solidarity. It’s all here. For the Australian #MeToo movement, this book feels like both war-cry and manifesto – a comfort, a realisation and a reckoning.

Heather Taylor-Johnson’s stunning poem, A Useful Body, brings the book to a poignant close, hauntingly passing both the mantle and the burden to the next generation:
‘‘My daughter is a gymnast, can climb a rope faster/ than her two older brothers using only her arms,/ legs straight out, pointed toes./ She has a magnificent, useful body./ She’ll be 10 in October.’’

Maxine Beneba Clarke's most recent book, The Hate Race, is published by Hachette.