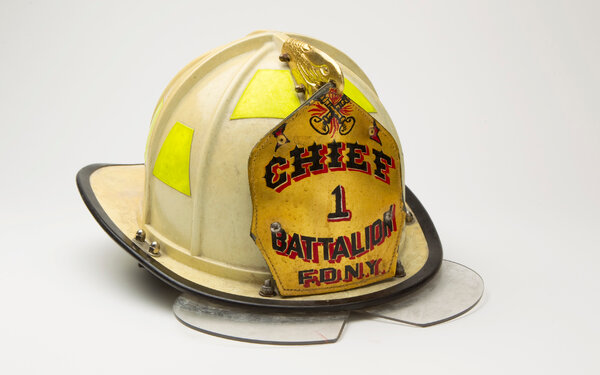 ORDINARY HEROES
A Memoir of 9/11
By Joseph Pfeifer

If you’ve ever watched the Naudet brothers’ singular documentary “9/11,” you’ve seen Battalion Chief Joseph Pfeifer, mustachioed, peering up from examining a suspected gas leak, as the first plane roars over TriBeCa and into the north tower. As the camera rolls, he coolly calls in the report, racing toward hell and history as the first fire chief on the scene. Pfeiffer’s exactly the kind of person you’d hope to see in the middle of a maelstrom; composed and resolute, the epitome of New York’s hallowed tribe of firefighters.

And for a third of the way, “Ordinary Heroes” is exactly the book one would expect from that kind of person. The battle veterans I’ve known discuss their experiences reluctantly and precisely, and that’s Pfeifer’s way, too. A soft-spoken former seminarian, he relays what he thought, saw and did that day without swagger or mawkishness, even during gut-punch moments as when he locks eyes with his younger brother, Kevin, just about to make his fatal climb up the stairs of the north tower, or notices a Fire Department chaplain, the Rev. Mychal Judge, murmuring prayers seconds before the first collapse. With communications breaking down, Pfeifer, a stoic surrounded by the men he trusts, leads and loves, does what he can to save lives in a situation beyond anything he or anyone around him has ever experienced. He later calls this “stovepipe situational awareness.”

When you speak to those who have seen battle, though, you also know that they’re not telling you everything, that there are things they won’t or can’t describe. Pfeifer’s artless “just the facts, ma’am” prose often aches with dignity, but you understand that he saw more, that the destruction of 9/11 shattered the Fire Department’s tightknit, even insulated community of public heroes in ways that went deeper than Pfeifer’s words can say. Through the excruciating months spent between ground zero and the roll of 343 funerals, the struggle to grasp why — why some lived and others died, why it happened, why they do this work — ate away at many in the force, including Pfeifer, who makes finding those answers the point of his work, and the journey of this book.

Throwing himself into the rescue and recovery — he was the planning chief at the pile — is one kind of search, but confronting his own trauma requires him to excavate his past, how he shifted his call to a life of service from the Roman Catholic Church to the firehouse, how he met his wife and moved up the ranks at the Fire Department, and his close relationship with his brother, whose remains were eventually found. Along the way, one feels Pfeifer learning the words to express the spiritual, professional and personal crises 9/11 caused him.

The department as a whole had been changing even before that day, despite its traditions. Firefighters still run into fires to save lives, but every year there are fewer fires in New York to run into. By the early 1990s, Koch-era efforts to end arson had yielded results in all five boroughs, and that trend continued. In 2000, the Fire Department responded to some 60,000 fires; by 2019, the number was 38,500, with fatalities less than a third of their 1970 peak. While still a hallowed profession, firefighting is now at least as much about prevention as reaction, and as Pfeifer makes his way through the painful debut of the Naudets’ film, the laudable Fire Department counseling services and the city’s own report on 9/11, he begins to see beyond the limits of stovepipe awareness. The Police Department and the Fire Department had both fallen into their own respective worlds that day, sharing information among themselves but not with all emergency workers. He eats dates with an imam in Staten Island and understands the grief the local Muslim community felt for the Fire Department; he comes to appreciate the complexities of firefighting in an age of terrorism. Appointed a two-star deputy assistant chief, he earns postgraduate degrees and plays a crucial role in developing the department’s operations center and its first strategic plan, helping it embrace its new role as part of the protective tissue of modern society and not just a brotherhood of heroes.

For better or worse, Pfeifer also learns about politics. At times he pulls punches that would land with meaning if delivered by someone with his integrity. Even after he hears direct evidence of what the Police Department didn’t share with the Fire Department, he blames it on the chemical response to stress rather than the decades of chest-pounding rivalry and political infighting between the two departments. Pfeifer also skates over the air-quality issues at ground zero. While no one knew in those first weeks what precisely would result from exposure, officials from the E.P.A., the Fire Department and the Occupational Safety and Health Administration did know the air was toxic. Yet respirator use was only encouraged, never required. Firefighters needed to be saved from their own sense of invulnerability — a fact worth remembering now, with only about 55 percent of them vaccinated, and the busiest trucks operating in neighborhoods with high Covid rates and lagging vaccinations. New York loves its firefighters too much to see them suffer needlessly again.

On this 20th anniversary of 9/11, we need to do more than remember. We need to ask what we learned. Pfeifer’s record of that day and its aftermath surely enters the canon as one of the necessary documents of 9/11. But it’s his inclusive sense of public service, one that values the heroism of those who do ordinary things in extraordinary times, that makes “Ordinary Heroes” a book for today.

‘August,’ by Callan Wink: An Excerpt

Life on the ocean wave was a floating HELL!