Home » Books » How Do You Illustrate Resilience? These Graphic Novels Show the Way.

A HOUSE WITHOUT WINDOWS (Humanoids, 166 pp., $19.99) pulls off something difficult with a quiet beauty. It mixes photography and comics from page to page, marshaling the strengths of each in the service of a devastating topic: the precarious lives of children in the Central African Republic, the former French colony that is one of the poorest countries in the world.

A collaboration between the Scottish journalist Marc Ellison, who wrote and took photographs for the book, and the Central African artist Didier Kassaï, whose ink-and-watercolor comics animate its narrative, “A House Without Windows” unfolds in three chapters, each focusing on the life experiences of individual children while also reporting on systematic conditions brought about by war and sectarian violence. (It is translated from the French by Nanette McGuinness.) Broadly, the first part locates us in the streets of the capital, Bangui; the second, in diamond mines; and the third, in a hospital run by Doctors Without Borders (“the country’s de facto health service,” the book notes). A profound meditation on the possibility of resilience and the future for young people in the Central African Republic, this hybrid reportage succeeds in no small part because of Kassaï’s elegantly modest drawings.

In a book whose content is far from understated — it chronicles, in part, the brutality kids face — Kassaï movingly deploys understated effects. This can happen through simple beats of silence that ask a reader to take in the severity or scope of a situation (say, a child accused of witchcraft). This can also happen through subtle visual details.

Kassaï is a character in the story, similar to the approach of a creator of comics journalism like Joe Sacco; unlike Sacco, he’s a calm, steady, reserved presence throughout, appearing often but declaiming little. (Ellison remains outside the frame.) In one important scene at the hospital, in the northern town of Kabo, Kassaï meets a severely malnourished 7-year-old, Dieufera. The scene opens with a full-page photograph of the little boy sitting on the edge of his bed; on the facing page, four drawn panels show us their introduction. Two of these are wordless; and we can notice that as Kassaï and Dieufera silently walk out of the room to a cooler spot, they are holding hands. (The narrative then gives way to photographs of them drawing together on an outdoor bench.) Their rapport, and Kassaï’s caring attitude, is clear without any comment at all. 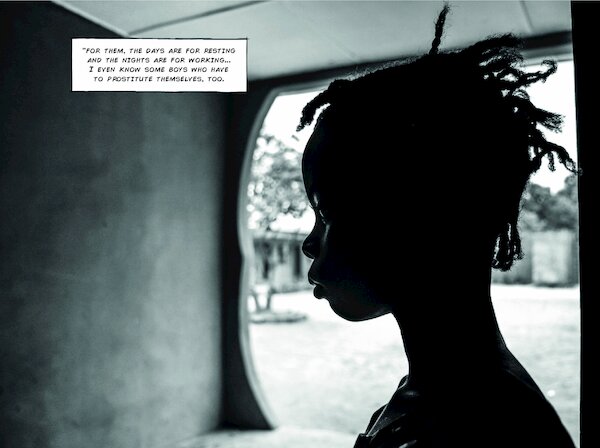 Speaking of care: One may be struck by the absence of it throughout the testimonies in this book. Many homeless children interviewed by Ellison and Kassaï describe running away because of years of harsh beatings by parents and other relatives. “My father never loved me,” explains one 13-year-old, who goes by the street name “Jack Bauer.” But there are also moving instances in “A House Without Windows” of tremendous care, like the story of the grandmother who brings her grandson to the hospital by bicycle in the middle of the night, undeterred by an armed group that tries to stop her; or a mother who walks for 20 miles with her 3-year-old daughter on her back to get her medical attention.

Dense with information, the photos in the book are arresting, while the illustrated portions breathe, and beckon the reader to contend with the wider context for the fragility of so many young lives. (As Marshall McLuhan would have it, photography is a “hot” medium, while comics is a “cold” one, inviting reader participation.) “A House Without Windows” is not without clunky moments — its last section can feel openly didactic — but over all it is a poignant, gripping read, making vividly present one of the world’s most vulnerable populations.

Nate Powell is best known as the cartoonist of the widely acclaimed “March” trilogy, written by John Lewis and Andrew Aydin about Lewis’s life leading up to and during the civil rights era. Powell’s deftness and style is one of the reasons “March” is so successful. While many graphic biographies and historical memoirs can feel inert, hiss dynamic line and talent for using the grammar of comics to shape drama and emotion, as well as action, are a standout. Powell’s SAVE IT FOR LATER: Promises, Parenthood, and the Urgency of Protest (Abrams, 160 pp., $24.99), a collection dedicated to Lewis, opens in 2016 with the election of Donald Trump.

Based in Bloomington, Ind., Powell is acutely aware of the privilege of his white middle-class family and seeks to instill in his two daughters lessons he learned from the late Georgia congressman. Despite the unpromising subtitle, “Save It for Later,” focused on America and the future it is handing to its children, is an absorbing reflection on intergenerational inheritance. And it is most fascinating when Powell turns his gimlet eye to how and why certain images circulate and recirculate as cultural and political symbols.

These include flags, the swastika and iconography derived specifically from the culture of comics, like the ubiquitous skull logo of Marvel’s Punisher, which was created in the mid-1970s for the series and initially was taken up by veterans. Powell is a longtime observer of military and paramilitary aesthetics (he hails from a Southern military family), and as a working cartoonist is expert in the potency of symbols. One only wishes that his book, already completed at the time, could have included his take on the visual culture of the Capitol riot, at which Punisher images were widespread.

Veering sharply from the above in genre — but not in the root sincerity of its focus on family — is SHADOW LIFE (First Second, 368 pp., $24.99), a supernatural action story mixing humor and social commentary, starring an older, widowed parent. The writer Hiromi Goto (a Japanese-Canadian novelist) and the artist Ann Xu’s protagonist, Kumiko Saito, is pictured on the cover resolutely wielding a vacuum cleaner like an ax; she’s fighting off death, coming for her too early. Kumiko is on the run from her assisted living facility and her three well-meaning but controlling adult daughters. “Shadow Life” has a few too many madcap sequences and final fight scenes with a giant spider. But it is refreshing to sit with this rich character’s thoughts as she seeks peace and searches for autonomy.

Don’t know what to read next? Here are 9 brilliant books we’re reading in lockdown