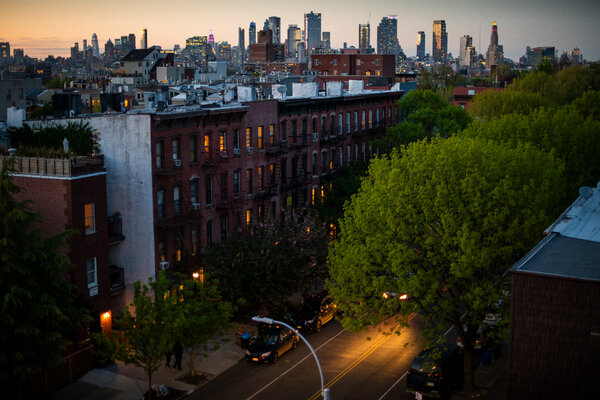 For those of us who measure the state of the world through the vitality of its largest cities, the last year and a half has been challenging. Coronavirus transformed the rhythm and diversity of street life so cherished by urbanists like Jane Jacobs into something else entirely: social distancing that turned neighbors into strangers, wealthy avenue blocks hollowed out by the flight to second homes in rural areas and commercial districts devoid of office workers. Any notion of the city as a democratizing force fell apart almost overnight, as the shift to remote work segregated — and protected — those who could work at home from those essential workers who could not.

Who better, then, to tackle the question of whether and how cities can emerge intact from the present turmoil than a well-known proponent of urban density and an expert in public health? Edward Glaeser and David Cutler’s new book, “Survival of the City: Living and Thriving in an Age of Isolation,” weaves together the reflections of these two Harvard economists — one a Democrat and the other a Republican — into an ambitious agenda for addressing what ails our largest cities or, as the authors refer to them, the “demons” that “accompany density.” Written in the midst of a pandemic whose end is not yet in sight, the book explains why cities and their economies were so vulnerable to Covid-19, and offers a blueprint for addressing the vast disparities in health and economic mobility that the events of the past year have thrust into the spotlight.

Despite the “age of isolation” in the subtitle, the authors note at the outset that this is a book not about disease but rather about the problems that can come with “urban scale and proximity.” They group these into two loosely connected sections: the mental and physical health of city residents, including problems of obesity, drug dependency and the lack of clean water; and broader social and economic well-being issues, such as education, crime and housing. Those like myself expecting a focused package of predictions about the shape and implications of pandemic recovery will find something entirely more expansive and entertaining.

The first section of “Survival of the City” tries placing Covid-19 in its historical context. With a lack of sentimentality common to their profession, the economist-authors show that society has historically been resilient to infectious disease. They point out that economies have at times even been strengthened by widespread death: The bubonic plague, for example, wiped out roughly a third of Europe’s population but led to prosperity as the landholdings of those who remained grew, wages rose and the gross domestic products of nations and city-states (were they to have been calculated then) registered dramatic gains. The Athenian plague wiped out Pericles and tens of thousands of Athenians, but not Athens itself. In our own day and age, we have cholera outbreaks to thank for the massive 19th-century public health advances — like sewers and clean water — in New York and London.

These medical time travels teach us that tackling the transmission of infectious disease requires two things: medical expertise and “effective” government. Among the most successful regimes the authors highlight are Dubrovnik (then Ragusa), whose timely bans on commerce limited Black Plague losses compared with other cities, and Venice, whose pioneering quarantine measures saw the sick banished to the island of Lazzaretto. Neither city-state would, by today’s measures, be considered a democracy, leading one to wonder how more “effective” government in a democratic setting could translate into anything other than more powerful government — a concept wholly at odds with the notion of personal freedom that underpins much of today’s partisan politics. One need look no further than the plight of the United States, the world’s richest nation, effectively producing enough vaccine to protect its population several times over but unable to persuade enough citizens to use it to defeat Covid-19.

The discussion about the American health system that follows is a sobering one — drawing the distinction between its ability to care for the individual and its failure to protect the population as a whole. As the authors point out, the United States spends more than any other nation on health care, yet is the only developed country in the world without universal health insurance. Private provision of health services geared to remedial rather than preventive care has left millions of Americans more vulnerable to infectious diseases, and arguably less accepting of vaccinations, than citizens of countries with national health services like Britain — where 90 percent of all adults have gotten at least the first shot of the vaccine.

The second half of the book tackles the chronic economic and social issues affecting urban areas — primarily affordable housing, education and crime. Here the authors seem to address, albeit obliquely, critiques of Glaeser’s acclaimed 2011 book “Triumph of the City: How Our Greatest Invention Makes Us Richer, Smarter, Greener, Healthier and Happier” — conceding that the destabilizing gulf between rich and poor (described in the new book as “insiders and outsiders”) has grown wider in the decade since that book was written. In chapters devoted to the future of downtowns, remote working, housing and social issues such as education and crime, the authors offer up a menu of ideas to put Americans back on the road to urban economic well-being.

To a professor and practitioner of urban planning like myself, some of Glaeser and Cutler’s ideas seem more rooted than others. The authors are justifiably optimistic that downtowns will rebound and flourish once again: Remote working may dampen the market for commercial office space, but not the lure of the city to the young and active. Glaeser and Cutler see gentrification as a normal step in the evolution of city neighborhoods, taking aim instead at limits on density — particularly in affluent suburbs surrounding downtown, where land use regulations limit development and inflate housing prices beyond the reach of those who most need the services that cities provide. As counterintuitive as the notion may be at a time of transmissible disease, the authors see greater density as key to ensuring our cities survive as channels of mobility for outsiders.

If there’s a weak link in this fast-paced and highly readable journey through the challenges facing America’s cities, it’s the inevitable gulf between ideas and implementation, which the authors themselves at points recognize. Few proposals are as simple as reducing land use regulation, which can be done unilaterally by a committed municipality; ideas like a new multinational entity to fight threats of infectious disease, greater aid for sanitation in the world’s poorest cities, and defining and implementing “better” policing are simple concepts but require complex alignments of myriad domestic and global actors and are thus unlikely to be realized anytime soon.

Solutions aside, the book serves as a useful tool in the effort to redefine the role of the city in an age of increasingly polarized politics, and reminds us that urban health is — as Fiorello La Guardia once remarked about cleaning the streets — not a Democratic or Republican issue.

Nor, might I add, is it exclusively a big-city issue. I would have liked to see this book touch even briefly on the future of America’s second- and third-tier cities — few of which have enjoyed the robust demand for real estate that has powered the tax base of Chicago, Los Angeles or New York. Even before the pandemic, places like Pittsburgh, Detroit and Providence were attracting new residents with lower costs of living and more affordable housing. Today, with remote work becoming mainstream, opportunities to find home-work balances in even smaller, more affordable places are growing exponentially — underpinning population shifts that work against our largest cities but may lead to happier, healthier and greener ways of living for the country as a whole. If we have learned nothing else from the era of Donald Trump, it is that our biggest, bluest urban centers — and the outsize challenges they face — should not be the sole lens through which we look at America’s future.

Home for the Holidays, for Better or Worse