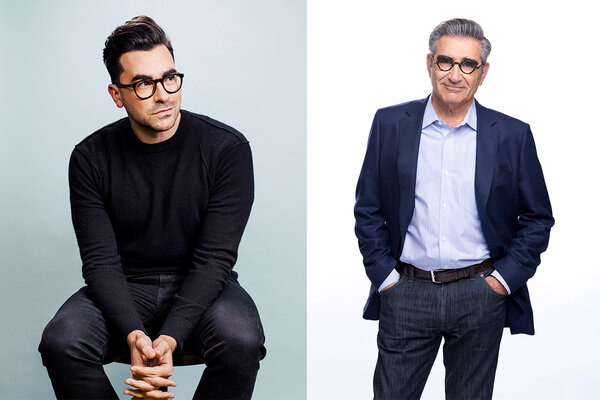 SCHITT’S PEAK In the darkest, loneliest, most discombobulating days of the pandemic, the six-season series “Schitt’s Creek” provided unexpected solace. Its viral stardom made a certain kind of sense: The show follows the travails of a formerly wealthy family that finds itself marooned in a roadside motel in a nowheresville town, with little hope of returning to a familiar life and the most rudimentary tools for building a new one. Who couldn’t relate to the Roses’ slow-dawning realization that the world had irrevocably changed?

This week, “Schitt’s Creek” makes its debut on the best-seller list, with “Best Wishes, Warmest Regards,” an official tie-in by the show’s father-son co-creators, Eugene Levy and Daniel Levy (who are, respectively, the patriarch and the elder sibling of the Rose family). The book is a colorful compendium of behind-the-scenes Schittsiana (if I may), including a look at the Roses’ bookshelf, which consists of a mini-library of entirely fictional — as in, made up — volumes ranging from “Cypher Mind” to “Banshees on a Plane” to Johnny Rose’s contribution to the business/self-help/leadership genre, “Fast Forward to Success.”

“Our production design team went way above and beyond with the props,” Daniel Levy writes. “The book jackets were designed, front and back with copy, art and evocative titles. The level of care and detail that was put in was so extraordinary and it did not go unnoticed.”

GIRL POWER Rick Riordan is such a veteran of the middle grade best-seller list, he may think it’s no big deal to find himself there yet again, this time with “Daughter of the Deep” at No. 2. But Riordan’s latest novel, a modern-day homage to Jules Verne’s “20,000 Leagues Under the Sea,” has an important distinction: It’s his first one focused exclusively on a young woman. On his website, Riordan explains, “Though obviously I’ve had lots of female protagonists in my previous novels, this book is told first-person solely from the point of view of Ana Dakkar, a high school freshman who learns her parentage is every bit as complicated as Percy Jackson’s, though it has to do with science, not Greek gods.” In an introduction to “Daughter of the Deep,” Roshani Chokshi, the author of the Star-Touched Queen duology, writes, “Ana is everything I wished I could be at 15.”