Globe-trotting academic and author Dennis Altman was once among the world's most influential gay liberation and AIDS activists, yet he insists his engagement in global gender politics, which has spanned more than five decades, all came down to a series of fortunate accidents. 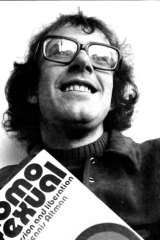 Dennis Altman at 28, at a launch party for his 1972 book, Homosexual: Oppression and Liberation.Credit:Peter John Moxham

Had he not chosen to leave his then-home in Tasmania, aged 21, to become a graduate student at Cornell University in upstate New York and had he not shared a flat with someone on the fringes of the "embryonic gay rights movement" – and had he not decided to write about its emergence in the book that made his name, Homosexual: Oppression & Liberation – the 13 books and multiple leadership roles in the global AIDS movement may never have come to pass (or so he claims, humbly).

Without this constellation of coincidences, the man once named in The Bulletin as among the 100 most influential Australians ever says, "I don't know what kind of career I would have had."

Now a fellow in Human Security at La Trobe University, Altman can narrow down the moment and the experiences that made him into one of the makers and keepers of gay-lib history into the few months he spent in New York City at the end of 1970. In his fresh autobiography, Unrequited Love (a reference not to a real world relationship but to the fact we care about the United States so much more than it cares about us), he wonders: "What if I hadn't written that first book, had stayed closeted, had built a more conventional academic career?

"Were my life a film, it might well be Sliding Doors, though I hardly see myself being portrayed by Gwyneth Paltrow." However, given that Hollywood casting has become gender-fluid enough to give us Cate Blanchett as Bob Dylan, you couldn't rule it out. 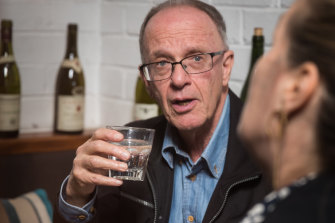 Dennis Altman at one of his favourite French bistros.Credit:Simon Schluter

"I'm very much shaped by the United States, I recognise that it was very formative," he says, while perusing the menu at his restaurant of choice, bistro-style French outfit Bon Ap' Petit Bistro in Fitzroy, Melbourne, chosen because, "I think very highly of it."

At 76, Altman remains enchanted by "that sense of excitement and things happening there that didn't seem possible here, but in fact I was often blind to the fact they were possible here", even if the more he travels in contemporary America "the more it seems like a foreign country".

For main, Altman makes the bold selection of steak tartare, which he considers "a good test of how good a French restaurant is", despite the fact "we're not supposed to encourage beef eating, for ecological reasons". As veganism sweeps the popular dining imagination, this kind of against-the-grain selection seems in keeping with Altman's resistance to tow any particular party line, as also evinced by his well-publicised "cynicism" about the merit of the institution of same-sex marriage.

He is also not a fan of labels for people who do not identify as heterosexual, even if they are intended to be inclusive. "I do talk about my dislike of the LGBT-whatever label. I think the idea every time something is thought of you add a letter, it's absurd." 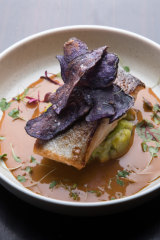 Fish of the day at Bon Ap’ Petit Bistro.Credit:Simon Schluter

It is unnecessary to use a label at all, he says, because people are more than one thing. "I think that to have only one identity is so limited: I don't think anyone is 'born this way' and I think that people have multiple identities; everybody has multiple identities. Some will be more important in some situations than others.

"The problem when you label someone with one thing is that it immediately cuts out all the complexities of the individual and no one individual can be totally one thing. We can be many things; at certain times and places, one can be the key but that's not constant."

Altman makes the more conventional choice of six freshly-shucked oysters from South Australia, as an entree to accompany the raw meat. Over those, he describes why he decided to write his new memoir in the form of a linear, three-year diary.

"I got the idea from P.D. James. I'm a great admirer of her mysteries, and it struck me as so clever because, in most biographies, there are these big chunks in the beginning that you don't really care about … and unless somebody has had a really interesting childhood and has a photographic memory, that isn't really all that interesting."

He was inspired to write a second memoir at all (labelling his first, the 20 year-old Defying Gravity, "rather self indulgent") by having witnessed great shifts in the US political landscape as well as great changes in the landscape of global gender politics. Given his personal and professional lives have been so heavily influenced by our relationship with the US, and with gender discussions, it felt like a good time for him to record his experiences with both.

"By profession I'm a political scientist, though I think 'political science' is an absurd term because politics is not science, and I'm increasingly aware of how difficult it is to write about contemporary politics – because as soon as you've written it, something happens you don't foresee, and I think I'd been casting around for ways to capture what seemed to be massive changes.

"And of course being in the US for the election of Donald Trump (which opens Unrequited Love) seemed like a moment where it was clear the world was going to change but we didn't know how."

In a concise but action-packed book, he weaves memories, observations, experiences and ideas with a real-time diary of events he attended, conferences in which he was a part and other life events between 2016 and 2019. The reader comes away with a sense of having traversed a vast amount of intellectual territory.

"I think we read biographies because we want to read about the time [the subjects] lived in and the gossip."

He confesses it was tempting to reveal more than he did about some personalities who have crossed his well-travelled path, including the many well known people with whom he mingled as the AIDS cause attracted high-profile hangers-on. He decided only to speak revealingly of the dead. 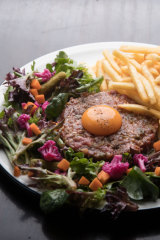 One towering, and often intimidating, figure who pops up in an early vignette is the great writer and intellect Gore Vidal. Altman says that, behind the crust of a man famously capable of excoriation, lay a surprisingly tender heart. "I knew Gore over a long period of time; he actually was one of those people who were much nicer in person than their public persona.

"There was a soft side which he spent a lot of effort disguising. I tell the story in the book where I took my partner [Anthony Smith] who then died the same year as Gore, up to Gore's house in LA for lunch. I left the room very briefly and Gore just turned to Anthony and said, 'I feel very lonely.' His partner, Howard Austin, had died the year before and there was a sense of vulnerability that every now and then came through. On the other hand, as soon as there was an audience, Gore was a monster."

Altman documented Vidal's life, including his unfulfilled political aspirations in a book, and says that, although his friend very much wanted to be president of the US, he would not likely have succeeded in the role. "I think he would have been a better president than the current one – but that's not setting a very high bar is it? 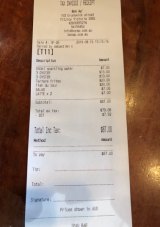 Receipt for lunch with Dennis Altman.

"But I don't think he would have been a good president … there was almost contempt [for people]. One of the things a really successful politician does is make everybody feel important. I can think of two current examples of politicians who I think have failed because they do let the contempt show through; one is [former prime minister] Malcolm Turnbull, who I think got rolled in part because he failed to hide his contempt for some of his colleagues, and the other is [French President] Emmanuel Macron.

"He has a very high opinion of himself – I have a very high opinion of Macron but Macron really does see himself as the intellectual leader of La France, and the problem is you've then got to deal with a mayor in a small town in the south who is as important in his world as the president of France. So I think it's a really hard act for politicians, and the ones who are really successful, like [former prime minister] John Howard, probably have the ability to engage with everybody as if they're equal."

Altman has also spent time living in France, and takes the chance to practise his pretty good knowledge of the language on the Bon Ap' wait staff.

It was through his relationship with Vidal that Altman gained access to some interesting insights into the trans-Pacific society set … including a cheeky titbit (mentioned in his book) about an interaction with Princess Margaret, which royals nuts will no doubt enjoy.

"I suppose the bitchiest piece of gossip in it is being told by Gore Vidal that he'd helped Princess Margaret solicit a boatman off the Amalfi coast. When she was staying with him on the Amalfi coast, I recall him saying she came back looking very satisfied. Well both Gore and Margaret are dead so who's going to deny it!"

‘Earthlings,’ by Sayaka Murata: An Excerpt