China today holds as many as a million Uighurs and other Turkic Muslim minorities in “political education” camps. Across China, Xi Jinping is pioneering a technological despotism of ubiquitous cameras, facial-recognition software and mass surveillance. In Vietnam, Belarus, Egypt and elsewhere, resilient tyrants rule through police monitoring, ethnic division and brute coercion. Burma’s liberalization ended in renewed military supremacy and the bloody expulsion of some 730,000 Rohingya Muslims into neighboring Bangladesh. In its 2019 report, Freedom House notes that last year, more countries became more oppressive than more free — the 13th consecutive year of more decline than progress.

Larry Diamond, a respected political scientist at Stanford, has spent 40 years circumnavigating the globe promoting democracy in Nigeria, Venezuela and some 70 other countries. Yet today he is aghast: “After three decades in which democracy was spreading and another in which it was stagnating and slowly eroding, we are now witnessing a global retreat from freedom.” In his impassioned book “Ill Winds,” he proves a stalwart, persuasive champion for democracy at a moment when its reputation has been fouled by Britain mauling itself with Brexit and by the United States electing someone as morally, intellectually and literally bankrupt as Donald Trump.

In their chilling recent book “How Democracies Die,” the political scientists Steven Levitsky and Daniel Ziblatt argued that the main threat to democracy today lurks within: from elected autocrats like Viktor Orban in Hungary and Recep Tayyip Erdogan in Turkey, who hijack the courts, stifle opposition parties and muzzle the press. For Diamond, the menace also comes from the outside: a transnational surge of authoritarian populism across Europe and the United States, along with a rising China and an assertive Russia that are “avidly undermining democracies and liberal values around the world.”

Despite the current gloom, the world has become far freer over the past two centuries, driven mostly by domestic politics but influenced by the international rise and fall of great powers. Samuel P. Huntington showed how democracy spread in three vast global waves beginning in 1776. The Allies’ victory in World War II and decolonization sparked a long postwar expansion of democracy. The third wave of democratization — which started in Portugal in 1974 and swept across southern and central Europe, Latin America, much of sub-Saharan Africa and Asia — was boosted by the Soviet collapse. Diamond was one of the first democracy experts to warn that this third wave was expiring; he now fears that a deepening democratic recession since about 2006 could devolve into an era of tyranny.

American democracy itself, Diamond argues, is roiled by these racist, populist tides, with Trump, “the American Orban,” posing a threat worse than Watergate. Diamond concludes that “Hillary Clinton would almost certainly have won” the presidency in 2016 if not for Russian subversion, which sowed confusion and hardened negative opinions about her. He astutely tallies the degradation that Trump’s lawless, norm-busting presidency has already inflicted: stuffing the courts, assaulting the Justice Department, demonizing the free press and mainstreaming extremist ideas like mass deportations and the Muslim travel ban — now shamefully validated by a Supreme Court majority. 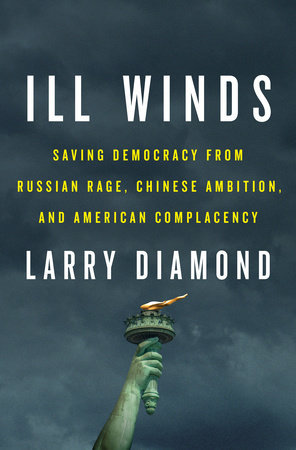 What’s a democrat to do? Diamond proposes some sensible policy fixes. To undercut Russian and Nigerian kleptocrats, he would abolish anonymous shell companies and end nameless real-estate sales. He wants nonpartisan commissions, not gerrymandering politicos, to draw electoral districts. Like many election experts, he advocates ranked-choice voting. When voters pick not just their first choice but their second, third or fourth choices too, politicians can win not by pandering to their partisan base, but by appealing broadly for second- or third-choice votes.

In foreign policy, Diamond supports democratizers worldwide and condemns Saudi Arabia’s scorched-earth war in Yemen. He’s strongly against wars for democracy, and opposed the United States invasion of Iraq and a protracted American military occupation there. After grudgingly accepting a plea from his Stanford colleague Condoleezza Rice to help contrive an Iraqi democratic order from postwar chaos in 2004, he wrote a tell-all book, “Squandered Victory,” hammering George W. Bush’s administration.

The villains of this book are Xi and Vladimir V. Putin, who “have enough power and ambition to undermine the entire global liberal order.” Repeatedly quoting from the Cold War strategist George F. Kennan, Diamond advocates a military buildup to thwart Russian or Chinese aggression. Unless American and European democracies get their acts together, he warns darkly, the European Union and NATO might collapse, a “Greater Russian Empire” could rise as the heir to the Soviet Union and China would threaten the freedom of democracies across Asia — all resulting in “depths of oppression and aggression that we have not seen since the end of World War II.” I like a worst-case scenario as much as the next fatalist, but this passage underplays what Diamond writes sensibly elsewhere about how dictatorships misjudge, overreach and provoke blowback.

Diamond sounds klaxons that “China seeks hegemony over all of Asia and the Pacific” and “aims to dominate world politics” in this century — assertions that even some hawkish China experts would dispute. No doubt China is a fast-rising military and economic power, beefing up its naval forces, reviving nationalistic quarrels with Japan, staking expansive claims and brazenly building artificial islands in the South China Sea. But while Russia recently invaded Georgia and Ukraine, some Chinese elites seem more cautious: China hasn’t fought a real war since 1979. An actual Chinese drive for hegemony over Asia would spark major confrontations with Japan, India, South Korea, Taiwan and other regional powerhouses, as well as the United States. Diamond needs to argue harder for his hard line.

For Diamond, the United States remains, as Bill Clinton proclaimed in his second Inaugural Address in 1997, “the world’s indispensable nation.” He properly highlights how the United States contributed to democratization in numerous countries. Yet “Ill Winds” does not dwell on how the United States has blighted its democratic credibility, gliding past a darker history that could reappear during future contests against China or Russia: how the Cold War drove Washington’s support for vicious anti-Communist governments in Indonesia, Pakistan, South Africa, Argentina, Iran and elsewhere.

Today Trump fawns over Putin, Kim Jong-un, Mohammed bin Salman and other thugs, driven less by realpolitik necessity than by personal affinity. After just one year of Trump’s presidency, a Gallup poll found that the median approval of American leadership across 134 countries had cratered to just 30 percent — four points below that of George W. Bush in his last year, which priced in the Iraq war. If the universal principles of liberal democracy are going to be revived, that will require not just American renewal under a less squalid president, but the leadership of a multitude of free republics spanning India, Japan, Germany, South Korea, France, Britain and South Africa.

Whether in Taiwan, Mongolia or Ghana, people like their rulers to be lawful, accountable and disposable. Dictatorships will always have to fear their people as they get richer and better educated; tyrannical regimes can always splinter; and courageous opposition leaders will always rise up (though not, it would seem, in the Republican Party). Before dying of cancer in Chinese state captivity, Liu Xiaobo, the Nobel laureate and democracy activist, wrote that “although people must still deal with tyranny and the suffering that it causes, they can respond to hate with love, to prejudice with tolerance, to arrogance with humility, to degradation with dignity and to violence with reason.”

Gary J. Bass, a professor of politics and international affairs at Princeton, is the author, most recently, of “The Blood Telegram.” He is writing a book about the Tokyo war crimes trial.