Home » Books » Decades After His Death, Richard Wright Has a New Book Out

In 1941, Richard Wright, fresh off the success of his novel “Native Son,” sent his editor the draft of a new book called “The Man Who Lived Underground.”

It is the story of Fred Daniels, a Black man who is detained and beaten by the police, who coerce him into a false confession that he killed a white couple. He escapes, then flees to the sewer system, where he takes refuge in a cave and, in a series of allegorical passages, peers into a church and gains access to businesses and other facilities through their basements. Daniels eventually returns to the light of day, eager to share the lessons he learned underground but is greeted with indifference and cruelty.

“I have never written anything in my life that stemmed more from sheer inspiration,” Wright wrote in defense of his submission, “or executed any piece of writing in a deeper feeling of imaginative freedom, or expressed myself in a way that flowed more naturally from my own personal background, reading, experiences, and feelings.”

The publisher, Harper & Brothers, turned him down. A portion of the novel was later released as a short story, but the original manuscript went unread until 2010, when Wright’s daughter, Julia Wright, unearthed it from his papers at Yale’s Beinecke Rare Book & Manuscript Library.

Now Library of America is preparing to release “The Man Who Lived Underground” in its original form on Tuesday, with an essay by Wright, “Memories of My Grandmother,” and an afterword by his grandson, Malcolm Wright. “I’m very excited for this to be in the world,” Julia Wright said in an interview.

Richard Wright died of a heart attack in 1960, when he was 52. For his daughter, the posthumous release of his book is particularly poignant in 2021. For years, she lived in Paris, traveling to the United States to delve into her father’s archive and to visit and advocate for Mumia Abu-Jamal, the activist and journalist in prison for the killing of a police officer. With each of her visits, she saw new evidence of “Black men who were ‘free’ but who were sentenced to death in the streets,” she said.

When she came across “The Man Who Lived Underground” in its entirety, Julia Wright said, the idea to publish it “was a no-brainer.” 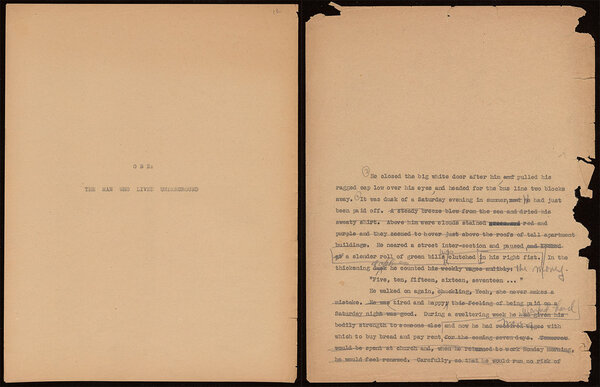 Some readers may be familiar with a short story by the same name, which begins with Daniels going underground, but they will not have read the novel’s first section, in which he is arrested without explanation, kicked, punched, slammed into walls and floors, and hung upside down by his shackled ankles. “You’re playing a game,” one of the policemen tells him, “but we’ll break you, even if we have to kill you!” By the time Daniels is presented with a confession statement, he can’t focus his vision enough to read it.

Julia Wright said she believed that the previously unpublished portions add context to the story of a man’s adventure in the sewers, a realistic dimension to an otherwise fantastical tale. “We need what’s happened in the daylight, in the critical daylight, to understand the change that Fred Daniels goes through in the underground,” she said.

Some of the first readers of Wright’s manuscript were taken aback by the brutality of those daylight scenes. Kerker Quinn, the editor of the literary quarterly Accent, called them “unbearable” in the margins of his copy. After Harper & Brothers rejected the novel, Quinn included two short excerpts in the magazine in 1942, focusing solely on scenes in Daniels’s underground cave. In 1944, the story — without the novel’s first section — was published in the anthology “Cross Section,” and a similarly truncated version was later included in a collection of Wright’s short stories, “Eight Men.”

“It’s not by accident that it was not published back in the 1940s,” his grandson, Malcolm Wright, said in an interview.

Comments like Quinn’s, along with the cuts made to the novel, suggest that editors and publishers were uncomfortable with the original book’s subject matter and tone, John Kulka, the editorial director of Library of America, said in an interview.

While “Native Son” also featured scenes of violence — some of which Wright cut or revised at the request of the influential Book-of-the-Month Club — the Black protagonist, Bigger Thomas, had victims who were both white and Black, and his story seemed to traffic in the tropes, as James Baldwin argued in “Everybody’s Protest Novel,” that appealed to white sympathies.

“The Man Who Lived Underground” offered no such appeal. “It’s an immensely Black book,” said Kiese Laymon, a writer who counts Wright among his influences and read the Library of America version before its publication. “There’s no character in this book that white liberals can be like, ‘Oh, that’s me.’ That’s a hard sell sometimes.”

In the included essay “Memories of My Grandmother,” Wright explained the genesis of the novel, writing that he was inspired by his Seventh-day Adventist grandmother, the structure of blues lyrics, the “Invisible Man” films of the 1930s, the writing of Gertrude Stein and the arrival of surrealism in America. Laymon described the book as both a critique of the justice system and an “internal, surrealist Black story, from a Black space told to Black spaces and places and people.”

Wright anticipated a skeptical response. “I know, of course, that to mention surrealism in terms of Negro life in America will strike some people like trying to mix oil and water,” he wrote in the essay. “It seems that there has grown up in people’s minds a concept of just what the Negro is, and anything that smacks of something which they do not want to associate with the Negro, for one reason or another, they will brand as alien.”

Whether this was true of Wright’s publishers, they likely did not, according to Kulka, believe “The Man Who Lived Underground” was a “worthy successor” to “Native Son.” “Native Son” sold 215,000 copies within three weeks of its publication and made Wright “America’s leading Black author,” Kulka said. Wright’s agent and editor were looking for “another big fat work of literary naturalism, not a short allegorical novel about a man who takes up an underground existence in an unnamed city,” he added.

While Wright himself made the changes to “The Man Who Lived Underground” — cutting it down to less than half its original length — his descendants see those revisions as a sort of forced compromise and believe that it would have otherwise not been published. Julia Wright, noting similarly substantial revisions required of Wright’s memoir, including its title change from “American Hunger” to “Black Boy,” described the alterations as “dismemberment.”

Laymon, who rereleased his essay collection “How to Slowly Kill Yourself and Others in America” earlier this year, has also expressed frustration with the publishing industry and how his work has been treated. He sees hope in and gathers strength from Wright’s legacy.

Where to Find Native American Culture and a Good Read