Charles Yu won the National Book Award for fiction on Wednesday for his mind-bending satire, “Interior Chinatown,” a sendup of Hollywood and Asian-American stereotypes.

The novel, written in the form of a screenplay, features an aspiring actor named Willis Wu who confronts casual racism and the cruel hierarchies of the entertainment world in his quest to graduate from bit roles as the “Delivery Guy” or “Silent Henchman.” The judges praised the novel as “wonderfully inventive” and “by turns hilarious and flat out heartbreaking.”

Mr. Yu, who was one of the National Book Foundation’s Five Under 35 most promising writers in America in 2007, worked as a lawyer before he quit to pursue writing. “Interior Chinatown” is his fourth book.

“I can’t feel anything in my body right now,” a visibly stunned Mr. Yu said during his acceptance speech, adding that he was so certain he wouldn’t win that he didn’t prepare remarks and wondered aloud if he was in a simulation. “I’m going to go melt into a puddle right now,” he said.

It was a fittingly surreal speech for an unconventional award ceremony, at a tumultuous time when reality has often has felt stranger than fiction.

In normal times, the National Book Awards ceremony is a lavish, black-tie affair held at Cipriani Wall Street, with a ceremony that draws the most powerful people in publishing and a constellation of literary stars. This year, as with so many cultural events that were scrambled as a result of the pandemic, the ceremony was held online, streamed on YouTube and the foundation’s website.

The mood this year was still upbeat, even virtually, as a much larger digital audience joined the celebration, which typically draws around 700 people in person.

“It’s hard in a pandemic,” Lisa Lucas, the executive director of the National Book Foundation, said in a video address. “We were scared we wouldn’t be able to do this show, and here we are.”

The nonfiction award went to “The Dead Are Arising: The Life of Malcolm X,” a deeply researched biography by Les Payne and his daughter Tamara Payne. In an emotional acceptance speech, Ms. Payne, who researched the book alongside her father and finished it after his death in 2018, thanked him “for committing to this enormous work” and “for bringing me on as his co-pilot.”

“This is such a bittersweet moment,” she said. “I really wish my father was here for this.” 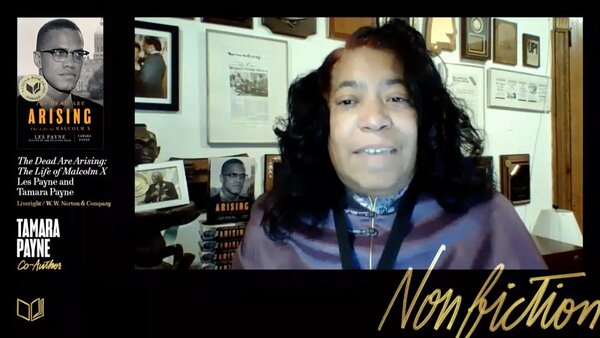 The awards, now in their 71st year, were hosted by Jason Reynolds, a best-selling children’s book author and two-time National Book Award finalist.

The National Book Award, which dates back to 1950, is one of the most prestigious literary prizes in the world and has been given to literary icons like W.H. Auden, Saul Bellow, Ralph Ellison, William Faulkner and Flannery O’Connor.

This year’s awards ceremony, which took place as the coronavirus pandemic continues to surge across the world, provided more than a moment of levity for the literary world. For struggling authors and booksellers, who have seen their sales plummet this year, literary prizes like the National Book Awards and Booker Prize can draw much-needed attention to titles that have been overlooked.

While brand-name authors and large publishing companies have seen healthy sales this year — print sales are up by seven percent this year over 2019 — many smaller, independent publishing houses and lesser-known writers have struggled, as universities and bookstores across the United States have closed, cutting off vital avenues for reaching readers.

More than half of the finalists this year were released by independent publishers and academic presses. Eight of the 25 finalists were debuts.

Some of the speakers alluded to the tense political climate in the aftermath of the election, the ongoing struggle for racial equality and the devastation of the pandemic. The writer Roxane Gay, who presented this year’s fiction award, spoke about the responsibility of fiction writers to grapple with the challenging times we are living in.

Finalists for the nonfiction award included Karla Cornejo Villavicencio’s “The Undocumented Americans,” a deeply reported narrative about the lives of immigrants; Claudio Saunt’s “Unworthy Republic,” which explores the consequences of the 1830 Indian Removal Act; Jerald Walker’s “How to Make a Slave and Other Essays,” in which he reflects on his experiences with racism; and Jenn Shapland’s unconventional biography “My Autobiography of Carson McCullers,” which examines the hidden love life of the Southern writer.

The award for young people’s literature went to Kacen Callender for “King and the Dragonflies,” which features a Black boy who is struggling in the wake of his brother’s death.

The prize for translated literature went to Yu Miri’s novel “Tokyo Ueno Station,” which was translated from Japanese by Morgan Giles, and is narrated by a ghost who visits a park where he lived when he was homeless.

The award for translated literature — a category that was added in 2018 — this year included works written in Arabic, Spanish, German and Swedish. They were Pilar Quintana’s “The Bitch,” about a Colombian woman’s relationship with an orphaned puppy; “High as the Waters Rise,” a debut novel about an oil rig worker by the German poet Anja Kampmann; Adania Shibli’s “Minor Detail,” which centers on a woman in Ramallah who decides to investigate the decades-old murder of a Palestinian teenager; and Jonas Hassen Khemiri’s novel, “The Family Clause,” about a painful family reunion in Stockholm.

The award for poetry went to the poet and translator Don Mee Choi’s collection “DMZ Colony,” a collage of survivor accounts, prose, and quotations with photographs and drawings that takes its name from Korea’s Demilitarized Zone.

The Literarian Award, which recognizes the recipient’s contributions to the American literary community, was awarded posthumously to Carolyn Reidy, the Simon & Schuster chief executive who died in May. The award, which was accepted by Ms. Reidy’s husband, Stephen Reidy, was presented by people who worked closely with Ms. Reidy — including the author Bob Woodward, who said of Ms. Reidy, “Carolyn was through and through a book person.”

The novelist Walter Mosley, who is perhaps best known for his mystery series featuring the detective Easy Rawlins, received the foundation’s Medal for Distinguished Contribution to American Letters, a lifetime achievement award that previously has gone to Toni Morrison, Don DeLillo and Ursula K. Le Guin. Mr. Mosley, who is the first Black man to receive the award in its 32-year history, remarked on how long overdue that milestone was: “One might be cowed by the monumental negative space surrounding the pinprick of light that this award represents,” he said. “Is this a dying gasp or a first breath?”

In Weimar Germany, a Passion for van Gogh Leads to Deception