Home » Books » Caught Between Worlds? So Are the Characters in These Books. 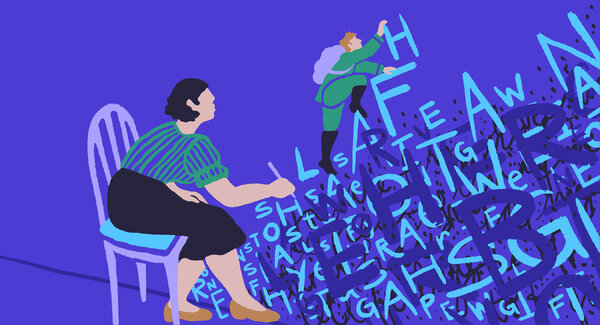 Misdirection can be as useful a trick in storytelling as it is in magic. It may be tempting to follow the trail of a character who plunges into the thick of the action, but sometimes it’s better to stick with the one who’s been left behind. That’s certainly the case in Bernhard Schlink’s OLGA (HarperVia, 288 pp., $27.99), which traces the experiences of a quietly determined German schoolteacher, a survivor of two world wars and a lifetime of waiting for a lover who may never return.

Schlink is best known for his novel “The Reader,” and it’s possible to see Kate Winslet, who starred in the film adaptation, as the young Olga. Never quite fitting in, never quite accepted in society, she manages to get an education and forge a career, but her attachment to an aristocratic adventurer is constantly sabotaged by his wanderlust. Herbert’s devotion to her exists both “in the space between the classes” and in the space between his forays to the far corners of the world — until an ill-fated expedition to Europe’s frozen north, undertaken in the summer of 1913.

Olga’s fortunes in the aftermath of his disappearance are relayed in Charlotte Collins’s graceful translation from the German, which shifts midway through to the first-person testimony of a man the elderly Olga has known since he was a sickly boy, entertained by her tales of Herbert’s exploits. When Olga dies under mysterious circumstances, he’s stunned to learn that she has named him her heir. And with that legacy comes a trove of letters, never delivered to Herbert, that will reveal long-held secrets as well as the depth of her anger and pain. “I am,” she declares, considering a Germany whose lust for greatness seems as destructive as Herbert’s, “the widow of a generation.”

The haunted man at the heart of Jai Chakrabarti’s A PLAY FOR THE END OF THE WORLD (Knopf, 304 pp., $27) is one of the few survivors of a generation, a Polish immigrant in New York who can’t forget the makeshift family that was transported to Treblinka without him. Jaryk and his older friend, Misha, first met in a Jewish orphanage in Warsaw and now they’re the only two of its former residents able to testify to the heroism of its director, a historical figure named Janusz Korczak, who spurned an opportunity to save himself and accompanied his young charges to the gas chamber.

Chakrabarti writes that his title refers to a play by the Bengali poet Rabindranath Tagore, “about a dying child living through his imagination,” that Korczak staged at the orphanage in 1942 — an attempt to comfort his beloved boys and girls, to “prepare them for what was to come.” Chakrabarti uses this historical footnote to envision a whole new fictional production, organized 30 years later by an Indian academic trying to save an endangered village whose inhabitants have fled the violent birth of the new nation of Bangladesh. Invited to participate, Misha eagerly accepts. But Jaryk, who has finally met a woman he might trust with a glimpse of his past, lets him fly to Calcutta alone.

Misha’s sudden death sends Jaryk on a journey halfway across the globe that will plunge him into an increasingly complicated political drama. But it’s the plight of Lucy, the newly pregnant American he leaves behind, that gives Jaryk’s moral dilemma added intimacy: Will honoring past loyalties sabotage those of the present and future? As the novel moves between Lucy in America and Jaryk in India, with interludes that return to the Warsaw ghetto, we come to understand Jaryk’s guilt-stricken “need to burrow into oblivion” — and to hope that another need will somehow uproot it.

The ancient narrator of Angel Khoury’s BETWEEN TIDES (Dzanc, 304 pp., $24.95) thinks she has become resigned to the abandonment that has loomed over much of her adult life. Yet the arrival at her beachside Cape Cod lair of a very inquisitive young woman gradually unleashes a torrent of memories. Gilly is the daughter of Blythe’s long-dead ex-husband, born when he was almost 70. She’s desperate to know more about him — and about why he created a whole new family with her mother on North Carolina’s Outer Banks, a ruthless attempt at starting over.

At first reluctantly, then with an unaccustomed fervor, Blythe recalls the death of her fiancé in the Civil War, which would lead to a lengthy courtship with his brother and their mutual devotion to the windswept New England coast, where he worked as a hunting guide and as the keeper of a lifeboat station. Despite her efforts, he was as impossible to confine as one of the wild birds he studied so intently. As the 19th century drew to a close and the new century’s inevitable changes loomed, his frustration evolved into rebellion.

In an afterword, Khoury writes of the stories she first heard as a child, rumors about a “man with two families,” north and south, barren and burgeoning, and her research in Massachusetts and North Carolina into what these families might have known — or imagined — about each other. From this, she has constructed the character of Gil Lodge, who so longed for a son that he named his last child, the fourth of his Southern daughters, after himself. Fittingly, he remains as elusive on the page as Gilly and Blythe are vividly present. For them, he’s inevitably defined by the natural world he loved. “Gil was wed not to us,” Blythe explains, “but to a place, and to that place he was the most faithful of men.”

New & Noteworthy Poetry, From Yale to Nick Flynn and More