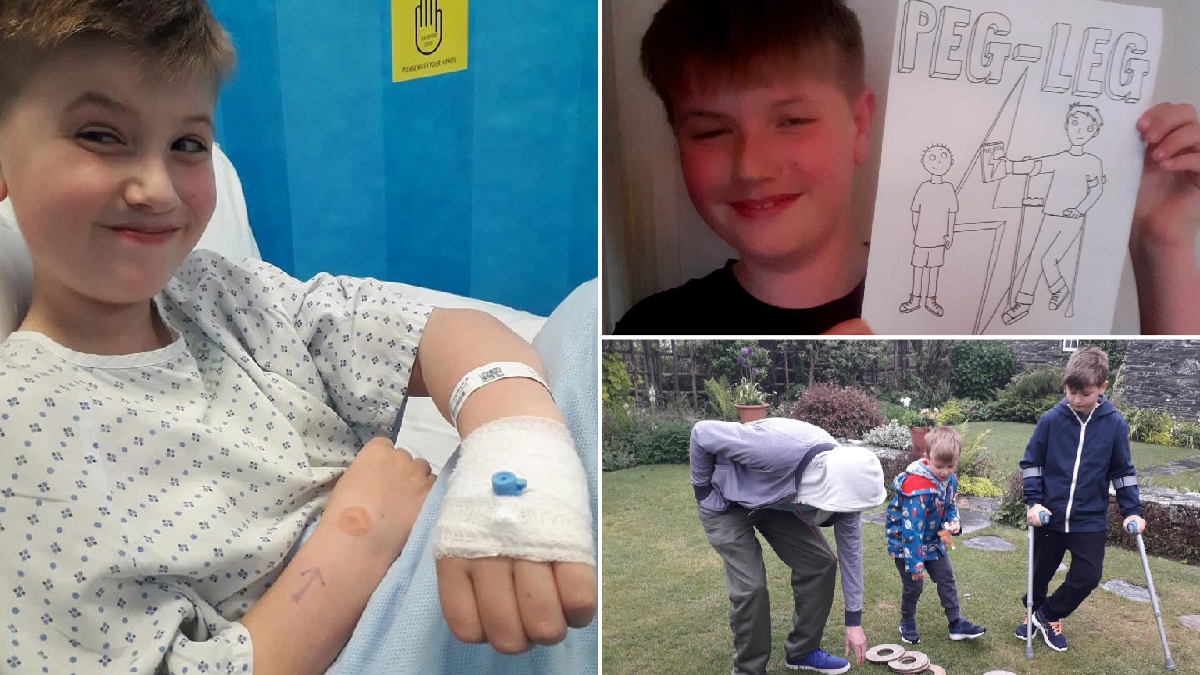 A young boy with chronic arthritis has written a book to help others understand his condition.

Ned Lowell was diagnosed with juvenile idiopathic arthritis (JIA) when he was just nine years old and a swollen knee gradually worsened until he couldn’t walk.

He was left using crutches and temporarily had to use a wheelchair while he underwent difficult treatments that made him very ill.

Since he was diagnosed with JIA – which affects three of his joints – Ned, now 11, has written his very own book about what living with arthritis is like.

Ned, who lives with his parents, Pheona and Justin Lowell, 43 and 46, and little brother Harris, 7, PEG-LEG was inspired by Jeff Kinney’s Diary of a Wimpy Kid books.

He first came up with the idea after struggling to think of someone he wanted to dress up as for World Book Day.

Then it occurred to him that he could write his own book. That way, he could go as himself in the future and inspire other children at the same time.

With a little help from his mum, who did the typing, Ned wrote about his diagnosis, treatments and symptoms in a light-hearted way.

Pheona, who works in the care sector, said: ‘Kids are so resilient, aren’t they – as long as they have lovely support around them, they’ll do well with whatever thrown at them – much better than adults.

‘The book came about around World Book Day a few years ago. He was on crutches at the time and was really cross he’d have to go to school as Tiny Tim or a pirate.

‘So, he thought he’d write a book about himself and then go as himself to school.

‘It was quite cathartic for him. At time when he wrote the first bit we hadn’t had a diagnosis, so I think for him there was a lot of anxiety around what was wrong with him.

‘My reaction when he had his diagnosis was ‘oh no this is awful’ – but he was so upbeat about getting an answer.’

Even though arthritis is often associated with older generations, around 15,000 children and young people are affected by arthritis in the UK, according to the NHS.

To publish PEG-LEG, Ned has teamed up with Juvenile Arthritis Research, a charity which aims to ensure every child and young person with JIA has the information and support they need.

The book will be included in their new support packs for teenagers with the condition, for which funds are still being raised.

The packs will help young people with JIA stay informed and know they are not alone and that someone cares.

Pheona, who was diagnosed with the arthritis in her 30s, said even she never knew children could get it.

She added: ‘I suffer from arthritis and I thought I was young – probably early 30s.

‘Originally, his knee started swelling and we put it down to maybe an injury as you would do.

‘He used to play roller hockey, and he had a fall the week before, so we put it down to that, but it just didn’t go away.

‘It was getting to a point where his knee was seizing – it was massive.

‘In some ways we were lucky because it was such a dramatic reaction, we got a diagnosis quickly. It started swelling January 2019 and by March had a diagnosis.

‘I know other children who don’t have such extreme symptoms. Apparently, previous winter colds can trigger the arthritis, but we don’t know.

‘Nobody really knows why it happens, why it comes on or when it’s going to end.

‘But only this month he’s come off the drugs, so fingers crossed – 70% of children grow out of it.

‘He’s more likely not to not have it in adulthood than keep it.’

Get in touch by emailing MetroLifestyleTeam@Metro.co.uk

Dying to change the world?