Home » Books » Balanchine and Cunningham: The Titans of 20th-Century Dance

BROADWAY, BALANCHINE & BEYOND
A Memoir
By Bettijane Sills with Elizabeth McPherson

The word “legacy” doesn’t really do it; neither does “impact.” The way that the culture has been changed by George Balanchine and Merce Cunningham — the quicksilver Mercurys of 20th-century dance — cannot be overstated. In 60 years and 400 works, Balanchine married modernist minimalism to the weightlessness of the Russian ballet tradition; after Balanchine, “pure” non-narrative movement was no longer just for contemporary dance. Story? Who needed it? We could understand one another so much better without it. The radical choreographer Merce Cunningham was a subtracting god too, excising emotionalism and deleting the “front and center” orientation that governed all previous stage work. Along with his composer/partner John Cage, Cunningham also cast away choice, introducing structured randomness to dance-making, and eventually, in turning to computer-aided composition, he threw aside even the way his own body moved.

Understanding how we engage with dance means understanding these two men, and so the University Press of Florida has released two slim memoirs by dancers who worked with them. These are both works by acolytes and worshipers, though they also both have the wistful timbre of the apostate’s testimony. Each woman essentially stopped dancing when she left her specific genius, and their two books — though hugely different otherwise — are infused with the manner of their leaving. 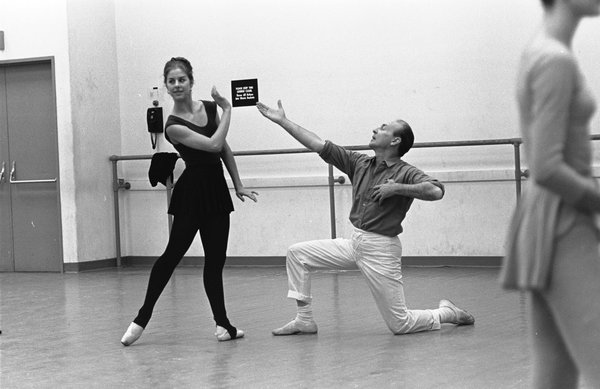 The juiciest ballet autobiographies tend to overflow with three things: pain (the sacrifices, the blood-blisters, the ruthlessness of a discipline that eats your body); gossip (everyone always wants to know what bad boys like Baryshnikov were really up to); and ego (each favorable review the dancer ever got). Thus Bettijane Sills, writing with Elizabeth McPherson, opens her “Broadway, Balanchine & Beyond” almost apologetically. Despite having danced with New York City Ballet from 1961 to 1972, she admits to having abandoned an earlier plan to write a memoir because “I hadn’t slept with Balanchine; I hadn’t taken drugs; I was just too ‘normal’.” Without the mess, does she have enough for a book? She’s come to believe she does. “My life and career,” she promises, “provide a clear lens for understanding George Balanchine’s choreographic practice … simply because my career was not clouded by scandal or serious trauma.”

The specific power of the unhurt, Sills implies, is clear sight. Is it? Whether or not she’s right, the book isn’t proof. It tells Sills’s story from young childhood to her current role at Purchase College (staging, among other works, revivals of many Balanchine pieces), with the bulk of the book treating her time at City Ballet. But there’s a barrier between her somatic understanding of the master’s form and the verbalization of it. Her “lens for understanding” mostly sees things that were obvious from the seats or the videos: the way he insisted that dancers cover huge amounts of space, for example. The lens is open — she’s an enthusiastic partisan of a technique — but it doesn’t focus. Nor, whatever Sills says in that introduction, is she unhurt.

The Balanchine “look” was extraordinary thinness, and Sills, apologizing all the while, reveals the mental torture that enforced it. It’s disturbing to see her protect a man who insulted and infantilized her; even now, Sills berates herself for failing “Mr. B” by gaining five pounds during the annual layoff. The moment the polite little book tips accidentally into nightmare comes halfway through. Having already been reprimanded for weight gain, Sills is called into Balanchine’s office, and he takes her hand, squeezing her fingers. “When I asked what he was doing,” she writes, “he reminded me of the story of Hansel and Gretel. Did I remember the old witch who in order to tell whether the children were plump enough for eating, would squeeze their fingers every day?” Get out, I thought. But she danced for that witch for 10 more years.

Marianne Preger-Simon, on the other hand, writes the gentle “Dancing With Merce Cunningham” from a position of preternatural acceptance and love. Her leaving was a gracious one, which is noted by both the critic Alastair Macaulay (who wrote the perceptive afterword) and her fellow dancer Carolyn Brown. Brown’s own memoir, “Chance and Circumstance,” is required Cunninghamian reading: It’s gorgeous, rich, observant and, perhaps most important, written by a performer who stayed with the Merce Cunningham Dance Company through its transition from scrappy eccentric to global superpower. In contrast, Preger-Simon left in 1958, so early that her gossamer light memoir is about a season of calm weather, unbuffeted by worldly success.

Preger-Simon’s whole dancing life is caught up in Cunningham. She was studying theater in Paris in the late ’40s when she saw him perform in a salon and felt swayed by his strong current. Back in New York, she became his first student; she graduated from being one of the untrained “kids” to being a founding member of the company. She often reprints letters she wrote to friends or family — so the book can sometimes have the tenor of a cheery postcard even as she is taking part in historic events: She danced “Septet”; she was there at Black Mountain College in the summer of 1953, “officially considered the beginning” of the company. In ultrabrief chapters, she notes what she ate or the beauty of a field as the troupe drove by in its rattling VW bus. Yet somehow this never seems beside the point. Cage and Cunningham were incorporating Zen precepts into their work; mindfulness itself (noticing the sandwich, the flowers) is the lesson. “We weren’t doing nothing — we were standing still,” she writes of one moment in a performance. I found I carried her book around for longer than it took to read it. I would open it sometimes, just to remind myself: It may look to the world like nothing, but everything is the dance.

Helen Shaw, a theater critic for 4Columns and Time Out New York, often writes about dance and performance.

The Tribe by Caitriona Perry: Absorbing interviews offer a forensic, rounded, and authoritative discussion about Irish-Americans in US

The Secret Service: The deadly serious business of protecting the President