CONSERVATISM
The Fight for a Tradition
By Edmund Fawcett

From its very origins in resistance to revolutionary movements in the late 18th century, conservatism has had two broad contrasting moods. The first is an attachment to the world as it is, and a resistance to too drastic a change in anything. The second is an attachment to what once was — and a radical desire to overturn the present in order to restore the past. Some have attempted to distinguish these two responses by defining conservatism as the more moderate version and reactionism as the more virulent. But Edmund Fawcett, in “Conservatism: The Fight for a Tradition,” a truly magisterial survey of the thought and actions of conservatives in Britain, France, Germany and the United States, insists more interestingly that they are both part of conservatism in its different moods.

Most conservatives, I imagine, have experienced both these sensibilities. A defense of the status quo against disruption comes naturally to anyone truly comfortable in the world. Its mood is skeptical, defensive, pragmatic, and it is rooted in sometimes inexplicable love of country, or tradition. But this can often shift, in different circumstances, toward acute discomfort and near-panic when change seems overwhelming and bewildering. The mood of this type of conservatism is certain, aggressive and ideological, and it can become obsessed with its enemies to the left and extremist in countering them. The first mood defends liberal democracy as a precious inheritance that requires tending; the second excoriates it for its spiritual shallowness, cultural degeneracy and tendency toward an individualist myopia or socialist utopia. Fawcett, the author of “Liberalism: The Life of an Idea,” calls the second not the “far right” but the “hard right,” keeping it central to the conservative tradition as a whole, rather than a departure from it.

Edmund Burke was both right and hard right. He was as in favor of the American Revolution as he was horrified by the French; he believed in pluralism, modest but necessary reform and the dispersal of power. But he could equally be viewed, Fawcett notes, as “a conservative nationalist, an early exponent of geopolitics treated as a conflict of ideologies (England, Burke wrote in 1796, ‘is in war against a principle’) or as a down-to-earth defender of British power concerned with efficient taxes, lively commerce and a stable empire.” He could be as rhetorically brutal as he was intellectually supple. He had Irish fire and English sense.

Burke could defend liberalism because it emerged organically in English and British history — and therefore was a conservative inheritance. And this conservative defense of liberal democracy is in many ways the history of conservatism in the West, and a core reason for its endurance and resilience, as well as its remarkable success in winning governmental power. But what liberal democracy eroded — the authority of religion, the coherence of a community, a sense of collective belonging, home, meaning and security — could prompt far more radical responses. Fawcett sees these not as anomalies, but as part of a conservative spectrum.

At the very start, Burke could be contrasted with Joseph de Maistre, who found adaptation to modernity to be indistinguishable from surrender to it. This kind of conservatism saw decline everywhere and always, enemies within and without, and responded with a program of not just resistance and adjustment but also “stigmatization of the Other; denial of social diversity and hounding of internal enemies; exclusionary nationalism; tarring of moderate opponents as radicalized and extreme.” You have, then, the calm conservatism of George H. W. Bush and the fevered conservatism of Patrick Buchanan; the balm of Jeb Bush and the bluntness of Donald Trump; the moderation of Theresa May and the flamboyance of Boris Johnson; of Angela Merkel, perhaps the most properly conservative of our contemporary leaders, against the radical outliers of reactionary German nationalism. Fawcett sees this as the core conflict within the right, always present, forever waxing or waning, and central to the future of Western democracy. 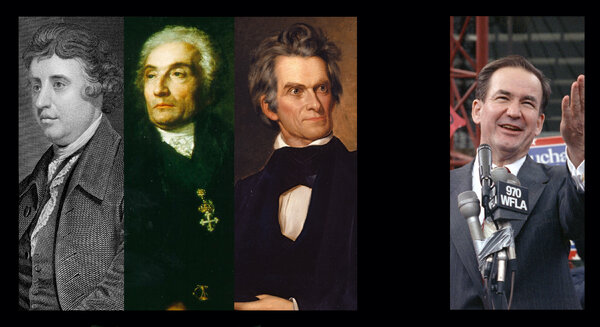 The strength of this book is in its international reach. Conservatism is by its nature specific and local, but Fawcett’s grasp of the commonalities and the differences within the West, from Catholic Bavaria to the antebellum South, from Bismarck’s pragmatism to Baldwin’s patriotism, from de Maistre’s radicalism to Buchanan’s insurrection, is, quite simply, formidable. He alternates between concise accounts of various conservative thinkers and brief histories of conservatism as a political force in the history of Western government. What he finds is that the party most opposed to liberal modernity has, in fact, ended up dominating its governments.

Conservatives will discover new and intriguing arguments in this book: There is a defense of John Calhoun’s antimajoritarianism; an exploration of Samuel Coleridge’s search for meaning in fast-industrializing England; an appreciation of the dry and melancholy genius of Lord Salisbury, whose method Fawcett describes as: “sound obdurate, but concede rather than battle in vain”; the fringe but potent dogmas of Carl Schmitt and the antiliberalism of Charles Maurras, whose “monarchism was radical, indeed revolutionary — a Utopian attempt to overturn a republican form of politics that had spread wide roots and grown strong over a hundred years.” Fawcett introduced me to the German rightist Peter Sloterdijk and the German moderate Arnold Gehlen, and he provides the best survey of the British Tory Roger Scruton’s thought I’ve ever read.

Fawcett has surprises and sharp judgments. I’d never heard of Antoine Pinay, the quiet French conservative who offered the postwar French right a model of sobriety, modesty and sound money, and a middle way between Pétain’s treachery and de Gaulle’s grandeur; Fawcett makes you wish he had run for president. Seeing the British conservative who most shaped Margaret Thatcher’s worldview, Keith Joseph, described as a domestic neoconservative makes blinding sense when you think about it. Jesse Helms and the great intellect of the Tory hard right, Enoch Powell, resonate equally in their racial reactionism in the 1970s and ’80s.

Powell remains a fascinating figure, especially now. A Tory member of Parliament, and briefly in the cabinet in the early 1970s, he insisted, against his party, on the nation-state as inviolable and solely authoritative, held that nonwhites would be forever alien in Britain and profoundly opposed the project of the nascent European Union. His views, hugely popular among the Tory masses but deemed taboo by party elites at the time, were not so much countered as repressed. And like many repressed ideas, they eventually came to the surface, long after his death, in the anti-immigrant, nationalist fervor of the Brexit campaign. As Buchanan was to Trump, Powell was to Brexit.

There are some strange omissions. Neoconservatism as a foreign policy doctrine barely appears; the Iraq war — the moment the mainstream completely lost the thread in America and Britain — is almost ignored; there is scarcely any treatment of Leo Strauss, whose impact on conservatives in America should not be underestimated; similarly, Michael Oakeshott’s idiosyncratic, conservative liberalism is given short shrift. There is no mention of the radicalizing woke left — which has played a key part in radicalizing the right in recent years and for good reason. Michel Houellebecq, the brutal but beguiling French novelist, is mentioned less than Rod Dreher, the American pessimist aiming to protect the religious from “liquid modernity,” who is dismissed thus: “Dreher’s suggestion of spiritual withdrawal free rode on the liberalism it claimed to oppose.” Indeed it does. I prefer T. S. Eliot’s view that “the conservative response to modernity is to embrace it, but to embrace it critically.”

Two ears are better than one mouth!