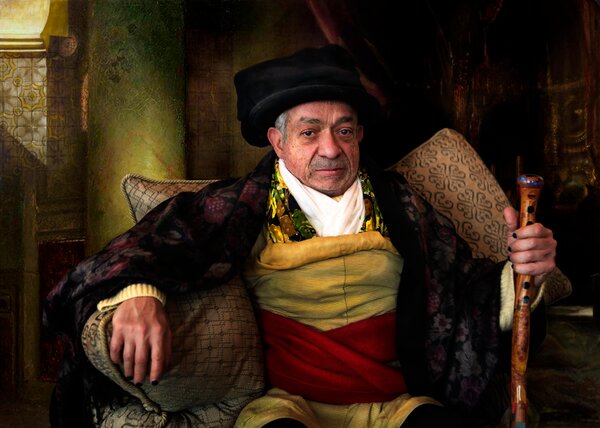 THE WRONG END OF THE TELESCOPE
By Rabih Alameddine

In Edith Wharton’s short story “Roman Fever,” two New York women on a visit to Rome proceed to misunderstand and judge each other. Oblivious to their surroundings, they see each other narrowly, “each through the wrong end of her little telescope.”

In “The Wrong End of the Telescope,” the sixth novel by the Lebanese American writer Rabih Alameddine, volunteers on the Greek island of Lesbos pull shattered families from the sea, some with compassion, some grotesquely snapping selfies beside sodden grandmothers, or grumbling when a lull in boat landings makes the experience less worthwhile. These refugee-tourists want “to feel better about themselves, both the ‘Look at me, I’m the kind of person who helps refugees’ kind of better and the ‘My life might suck, but yours sucks even more’ kind.”

Meanwhile, cynical journalists scavenge for stories. With their messy ponytails and patronizing glances, they ignore the women, congratulating a father for fleeing Syria to save his 10-year-old daughter from forced marriage to an ISIS fighter. Other refugees “don’t really love their daughters,” one of the journalists explains. “Not all of them.” Such indignities go mostly unchronicled in real life, since the details that reach Western readers are often written by similarly myopic journalists, their lenses turned toward themselves and the brief, well-publicized sacrifices of rescue workers.

Alameddine’s spectacular novel is rendered through the refreshingly honest lens of Dr. Mina. A trans woman, born the third son of a traditional Lebanese family, she leaves Beirut for Harvard, dragging bitter memories of an abusive mother and a father who advised: “In private, eat according to your taste, but in public, behave according to the public’s.” Over the years she comes into her own as a skillful and empathetic physician. In her 50s, she travels to Lesbos to volunteer among the refugees who wash ashore; looking like aunts or cousins from back home, they carry garbage bags of broken treasures along with countless stories and unspeakable loss.

[ Read our profile of Rabih Alameddine. ]

Dr. Mina is the storyteller the refugees deserve: respected by the Europeans, but steeped in their traditions and history. When a terminally ill mother arrives on shore, Dr. Mina cares for the woman’s family as they navigate the purgatory of the refugee camp. But her greater (and rarer) power is that she is able to observe what European volunteers can’t.

This is the first novel I’ve read that gives ample room to the ugliness of certain camp volunteers (the bored, the coddled, those battling pangs of uselessness) and the many humiliations some inflict on the displaced. But calling out anyone who gave up a vacation to meet boats seems ungrateful, so the refugees smile for their rescuers’ camera-phones and keep quiet.

Alameddine’s irreverent prose evokes the old master storytellers from my own Middle Eastern home, their observations toothy and full of wit, returning always to human absurdity. Here, a volunteer berates a group of refugees by telling them that they’re “no longer in chaos” and militiamen play at having “recently shot someone.” I never imagined I’d come across “doodool tala” (“golden penis,” a Persian mother’s adoring nickname for her son) in a literary novel. Again and again, Dr. Mina cracks open the strange, funny and cruel social mores of East and West. She shows us that acceptance and rejection exist across borders and often manifest in surprising ways. I will never forget a passage about a beloved Syrian village doctor, who, to evade ISIS’ strict rules on separation of the sexes, visits each house twice, once as a man and once in drag (a niqab) to treat the women.

Throughout the book, Dr. Mina addresses a blocked and disillusioned Lebanese writer who, having seen too much displacement and horror, finally breaks. I found this mysterious unnamed listener deeply poignant. In part, Alameddine is speaking to us storytellers, the ones who carry our people’s narratives westward, who shape how they’re seen (and used) by those in power. “Literature today is an opiate,” he warns, while “memory is a wound.”

In a moment of revelation near the end, the writer decides to never write another word about refugees. Why try to fashion stories for Western entertainment? Instead, a friend suggests, maybe he could write something that would allow the displaced to “inhabit the skin of Americans, walk in their Cole Haans, empathize with their boredom and angst.” Maybe the refugees could go drama-shopping and crisis-touring in the detritus of American lives for a change. Turn the telescope on them. I admit, I’ve dreamed of it, too. If only those Cole Haans hadn’t left such an imprint on the rest of the world.

Winds of Winter: George RR Martin confirms THIS castle on The Wall to play major role

A New Biography of Kurt Gödel, Whose Brilliant Life Intersected With the Upheavals of the 20th Century