Alma Mahler Gropius Werfel, née Schindler (1897-1964), a privileged, highly cultured child of the Austro-Hungarian empire, has long been regarded as a mysterious figure who always appeared to be in attendance at key moments of history, waving from the sidelines as the more celebrated or notorious players passed by. 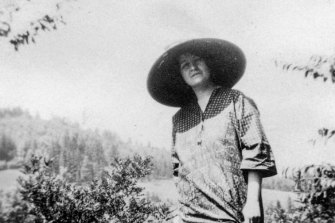 Alma Mahler pictured during World War I, only a few years after Gustav Mahler died.Credit:

Indeed, the parade of Alma’s own long and winding and frankly incredible life was lengthy enough to span the court of Emperor Franz Joseph and the Camelot of John F. Kennedy, who was assassinated the year before Alma’s death in New York at the age of 85. In cultural terms, she lived long enough to embrace Gustav Mahler, her first husband, and, in 1960, 50 years after his death, to encounter Mahler’s great proselytiser, Leonard Bernstein, whom she also found to be a great conductor and composer. By then, La grande veuve (‘‘the grand widow’’, a moniker bestowed on Alma on her 70th birthday by a fellow emigre, the German author Thomas Mann) was practically a deity in her own right.

The complexities of Alma Mahler, particularly her reputation as a serial femme fatale, were adroitly and mischievously summarised by the American satirist Tom Lehrer, in his song, Alma: ‘‘ The loveliest girl in Vienna / Was Alma, the smartest as well, / Once you picked her up on your antenna, / You’d never be free of her spell. / Her lovers were many and varied / From the day she began her beguine. / There were three famous ones whom she married, / And God knows how many between …’’

This is not, of course, the whole story. Tragedy also stalked Alma’s life. She lost two husbands (Mahler in 1911, and Werfel in 1945; Alma did not attend either funeral). Three of her four children (Maria, from her marriage to Mahler; Manon by her second marriage, to architect Walter Gropius; Martin, by either Gropius or Werfel) died young. In 1940, following the Anschluss and outbreak of war, Alma fled Vienna with her third husband, the poet Franz Werfel. Their protracted passage to the United States, via France, including several weeks in Lourdes, Spain and Portugal, was tough, but not without surreal touches.

Here’s Alma, at the French border post: ‘‘I was wearing my oldest sandals and lugging a bag which contained the rest of our money […] my jewels and the Score of Bruckner’s Third. We must have looked faintly ridiculous, only slightly less picturesque than the smugglers in Carmen.’’

The problem, though, with recounting the life of Alma is sorting out truth from the legion of demi-truths or downright fiction, a lot of which were perpetrated by the ever-controlling Alma herself. She kept copious journals, all written in a looping script in purple ink to match her prose. 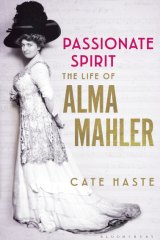 As Cate Haste acknowledges, ‘‘deep delving’’ was the only way to go. She has delved well, I must say, and her biography is well told, simply related, scrupulously annotated, and leaves any florid cadenzas to Alma herself. After all how could anyone possibly top her idiosyncratically Weltschmerz versions of Mills und Boon, especially given the supporting cast?

Here’s the 20-year-old Alma on being kissed by Gustav Klimt: ‘‘We were enfolded in dark silence, and he kissed me with such force, with such a frisson. […] A kiss with which he begged me never to love another man and with which I gave him my promise …’’ 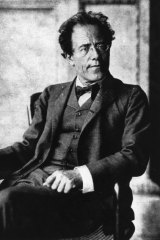 Of course she didn’t! As Haste notes, ‘‘Alma’s greatest fear was a vacuum of love’’. She went on to have many affairs with notable suitors. These included liaisons with her composition teacher, Alexander von Zemlinsky — ‘‘He so ugly, so small — me so beautiful, so tall’’ — and the expressionist artist Oskar Kokoschka, ‘‘one violent struggle of love’’, who, in 1918, commissioned a life-size effigy of Alma, which he called ‘‘my inanimate companion’’.

Alma’s long twilight, and her continuing devoted work as Mahler’s representative on earth, tends to obscure her own reputation as a composer. She was perhaps unusually self-deprecating, when she wrote, ‘‘God gave me to know the works of genius in our time before they left the hands of their creators’’. But what of her creations?

This biography is timely not only because it casts new light on a hitherto and somewhat unfairly maligned character who has herself been dead for more than half a century, but also because of the continuing fascination with her music, especially in an age when women composers are commonplace.

Famously, Mahler forbade his fiancee to continue composing: there was room for only one in the family. So, dutifully, Alma laid down her pen, picking it up again only briefly, in about 1915. Her output, estimated at more than 70 songs, plus piano and chamber music, has largely been lost to the world: mislaid or destroyed in the war. Only 17 songs survive. 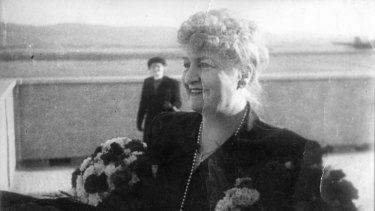 Alma Mahler returns to Vienna after the Second World War.Credit:

Haste writes — rightly, I suspect — that Alma’s music was an inner refuge from the tragedies that permeated her life, and a real expression of her own passionate spirit. Mahler once said, referring to his music, that his time will come. Is it Alma Mahler’s turn? Certainly, her songs are at once plangent, musical and very much of their time (Mahler’s time, too, come to think of it).

The English mezzo-soprano Sarah Connolly, who has helped bring Alma’s music back into the recital hall, recently wrote that the songs prove ‘‘she has the rare gift of melody. […] The music is in part voluptuous, coquettish, Wagnerian in intensity and harmony, yet intimate, sensual, charming and surprising.’’

In fact, this also proves that Alma, often a contradictory as well as compassionate spirit, was, as a composer, capable of achieving a form of cultural unity with the very person she was. That person is on full display in this remarkable book. It is the clearest, most honest appraisal of Alma one could wish for.

Michael Shmith is the author of a biography of Gustav Mahler (1998), and of Cranlana: The First 100 Years, recently published by Hardie Grant.