In the writers’ world, I’ve encountered the notion that ideas are like butterflies, landing softly on this shoulder or that brow and, if the writer is not quick enough, flitting off to find another, more receptive mind. The idea lends a sense of urgency to the writing process — quick, write that novel before someone else does! Or maybe it provides the hope that inspiration is plentiful and free and waiting to be plucked out of the air.

I’m not convinced. Sure, on a basic level, every story has been told before and will be told again, but the novels I’ve found the most urgent and fascinating are so specific to their authors that they couldn’t have been written by anyone else.

Case in point: Leone Ross’s fantastic new novel, “Popisho.” No one will persuade me that this bold, iridescent butterfly of a story could have landed on anyone’s shoulder but Ross’s.

Ross was born in England of Jamaican-Scottish ancestry, and while she has built her career as a journalist, poet, editor, academic and novelist in the U.K., she was raised in Jamaica. But Popisho, the fictional island namesake of her third novel, is formed as much from fearless imagination as real-world Caribbean geography.

At the heart of the story is the troubled Xavier Redchoose. Like all the inhabitants of the island, he has a personal magic, a “cors,” and his is the ability to perfectly flavor food with just his touch. Because of this talent, he has been chosen by the gods for a sacred duty bestowed on one person each generation: to prepare a perfect meal for each citizen of Popisho. His hands and taste buds are fickle; people must wait their turn, never knowing when they will be invited to Xavier’s restaurant, the Torn Poem. But the wealthy governor of Popisho thinks he should get special treatment, and demands that Xavier cook the feast for his daughter’s wedding. 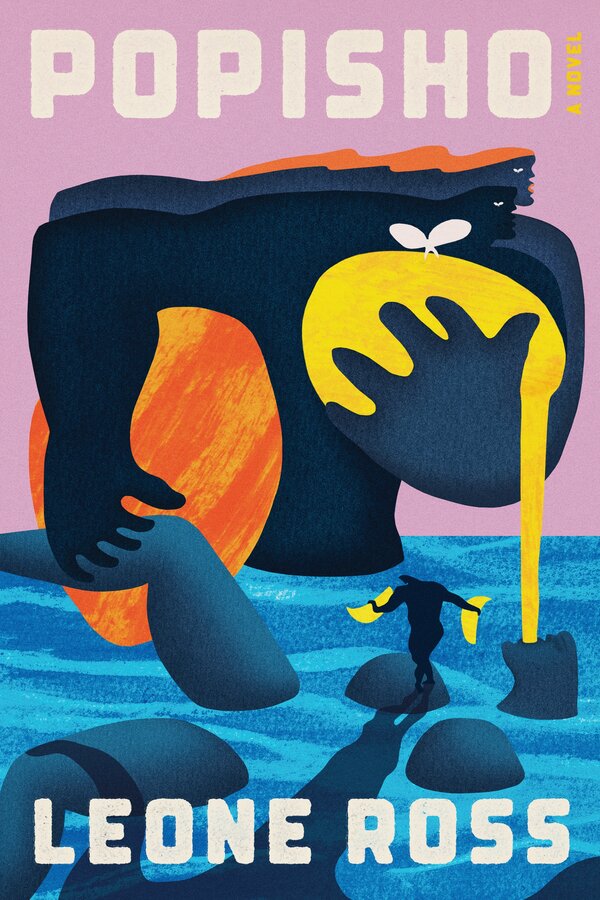 Xavier is finding it difficult to cook for anyone, much less a pompous politician — he is resistant to being pushed around, his wife has died and he is in a wrestling match with addiction. These might seem like prosaic concerns. Not on Popisho. Xavier’s addiction isn’t to anything so mundane as alcohol or heroin, but instead to moth eating. Across the island, people snatch butterflies out of the air, plop them in their mouths and are bathed in a lovely intoxication that, depending on the variety, can be “like the heat of a good wine” or the “cool swallow of rare ship-bought vodka.” But Xavier is among a handful of islanders who are cursed by a craving for moths, a desire far more addictive, dangerous and shameful than butterflies. Xavier asks, “What would happen, which gods would cry, if he lifted the thing to his mouth, swallowed the moth whole and cursed them all?”

And as for Xavier’s dead wife? Everyone knows that her ghost will eventually find her way back to her one love, and whenever Xavier hears squelching footsteps behind him or something dragging along the ground, he is filled with dread, because she will come with “eyelids gone, sockets stretched into her forehead, mouth and nose horribly vestigial.”

Xavier isn’t alone, in his magic or his misfortunes. There is also the governor’s son Romanza, who is in love with another man, ostracized by his family and living among the “indigents.” His cors is the ability to know if someone is lying or not, and in his clandestine way, he is trying to speak truth to the islanders. His sister, Sonteine, has her own worries. Her wedding is drawing close and while she loves her future husband, she is afraid of sex and, unusual among the islanders, has yet to discover her “cors.” There is also Anise, a gifted healer who is unable to cure her own infertility. When she learns that her husband is cheating on her, Anise revisits the memories of an old flame. And on Popisho, as is true of most small communities, all lives are intricately entwined, past and present, for both good and bad.

Popisho is a sensual place. The island is overgrown with flowering vines and fruit trees, ocean waves break along the beaches and mouthwatering food is around every corner — jackfruit and pastry, sausages, cornbread, prawns in lime, goat cheese and sour cherries, pumpkin pudding with caramel and cinnamon. The air is rich with the scent of ginger, green pepper and onion, and there is “dark, unrefined sugar crunching under their feet.”

Equally ubiquitous throughout the novel is sex, in all of its beautiful and frightening forms. There is sex for fun, for the hope of children, for love and passion, wed and unwed, straight and gay. But there is also forlorn sex, threatening sex, prostitution both empowered and powerless, sex withheld and diverted and regretted.

The book is often bawdy and unexpectedly funny. Partway into the story, all the women of the island feel their “pum-pums” drop to the ground at their feet. How do you reattach a vulva, and perhaps just as important, does one want to? One woman puts hers in the refrigerator so it won’t spoil, but another woman teases her that someone might mistake it for a piece of pork and fry it up. Another tosses hers out the window, glad to be free of the nuisance. Eventually some of the pum-pums are used in a magical spell that harks back to the Greek comedy “Lysistrata,” while other so-called “free-range pum-pums” wreak comic chaos around the island.

In such a way, Ross works her own magic, transforming humanity’s worn-out suffering into something new and astonishing. Addiction becomes a dusty, thrumming moth that we can hold in the palm of our hand. With it separated from ourselves, we are able to observe its fragility, its strangeness and terrible power. Women’s complicated relationship with their own sexuality is similarly detached, set free, seen anew.

Even as Ross is dazzling and shocking us, she’s also steadily questioning who holds the power and whether they are worthy of it. The elected governor is a self-serving politician who paves his way with bribes and lies even as he lets some islanders starve. Workers in the toy factory earn pitiable wages, but the elite are gathering in the riches. We learn the history of Popisho, how emancipated slaves went up against Indigenous islanders and together they created a new society, and how even now the push and pull between Christianity and Popisho’s gods continues.

As the stakes rise with a hurricane threatening the island and the Indigents revolting against the governor, Xavier and Anise consumed by their own conflicts, I felt the pull of a good story — I wanted to turn the pages faster and faster to find out what happens next. Will old lovers be reunited? Will wounds be healed? What kind of meal will Xavier prepare, or will he succumb to the temptation of the moth?

At the same time, Ross’s lyrical, rhythmic writing is something to be savored. In one scene, Xavier’s sous-chef “broke chicken joints, crack-crack, and plunged pieces into three different marinades,” then “Xavier tasted again. Fool, he said conversationally. Crick-crack.”

Critics have spotted the influence of Toni Morrison, Salman Rushdie, Gabriel García Márquez and Junot Díaz in Ross’s work. In interviews, Ross has added Stephen King, Anaïs Nin, Sherwood Anderson and Roald Dahl, among others. I saw all of those influences swirling in the deep waters of this book. I was also reminded of the fairy tale realism of Helen Oyeyemi and the ecological surrealism of Jeff VanderMeer.

Despite this eclectic chorus backing her up, Ross’s voice sings out loud and pure throughout the entire novel. And while she is not afraid to call out humanity’s failings and wrongdoings, something else reigns over the story: joy. Joy in the senses, in food and love and kinship, in music, uproarious laughter and late-night parties.

At times Popisho gets a little rowdy, but Ross is like a thoughtful hostess — she’s always at your side, pointing out the best dishes, explaining the customs, introducing you to friends and enemies even as she whispers a few juicy bits of gossip about each of them. Much of it will be extraordinary and overwhelming to the senses, but you’ll find your way, and when everyone gets up to dance, you might end up tapping your foot along with the beat.

“Brap, brap! A final ground-drumming, a group pirouette that appeared to have nothing to do with anything but the joys of the world.”

New in Paperback: ‘Blowout’ and ‘The Last Trial’

Siege: Trump Under Fire – Scandals and catfights aplenty, but too many unanswered questions