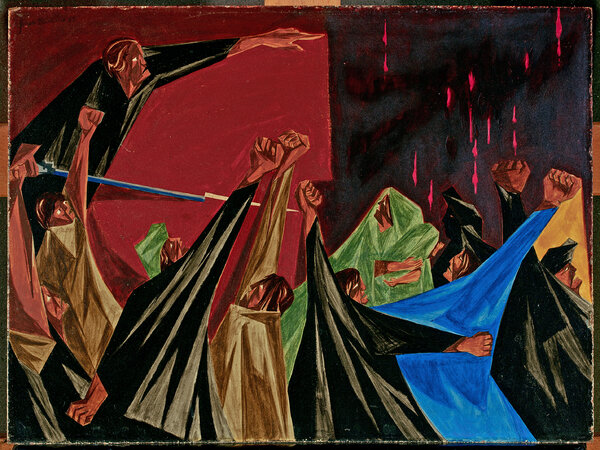 Has a book ever come into the world when at least four other books were already in print attacking it? Admittedly, these broadsides were against earlier incarnations of The New York Times’s 1619 Project, which appeared in this newspaper two years ago, followed by a podcast, public forums, lesson plans for schools and a Pulitzer Prize for the originator, Nikole Hannah-Jones. The project asserted that the full origin story of the United States begins not with the arrival of the Mayflower in 1620, but with that of the White Lion and its cargo of captive Africans in Virginia the year before. This declaration provoked a Twitter firestorm of angry accusations from critics and combative replies from Hannah-Jones. President Trump denounced the project, and lawmakers introduced bills in the U.S. Senate and at least five state legislatures to strip funds from schools that used its curriculum. The appearance now of an expanded version of the project in book form is sure to provoke yet more assaults.

I picked up “The 1619 Project: A New Origin Story” with some apprehension. Not because I disagree with the project’s basic aim, but because I had been troubled by some overstatements and factual errors in the newspaper version, such as the claim that there were “growing calls to abolish the slave trade” in Britain in 1776. (That country’s abolitionist movement didn’t come to life until a decade later.) A group of respected American history scholars later criticized The Times for these. As the controversy continued, a historian who had been consulted by a fact-checker on the project went public to complain that corrections she had urged were ignored. It was disappointing to see work whose intention I admired marred by missteps.

As I read the new book, however, my worries largely melted away. It is not without flaws, which I will come back to, but on the whole it is a wide-ranging, landmark summary of the Black experience in America: searing, rich in unfamiliar detail, exploring every aspect of slavery and its continuing legacy, in which being white or Black affects everything from how you fare in courts and hospitals and schools to the odds that your neighborhood will be bulldozed for a freeway. The book’s editors, knowing that they were heading into a minefield, clearly trod with extraordinary care. They added more than 1,000 endnotes, and in their acknowledgments thank a roster of peer reviewers so long and distinguished as to make any writer of history envious.

The articles in the original Times version have here been extended and revised. There are seven new essays — for a total of 18, by as many contributors — and woven through the book are photographs as well as poems and short fiction inspired by historical events. The contributors have flair: Khalil Gibran Muhammad calls the large slave markets of New Orleans “the Walmart of people-selling”; Wesley Morris speaks of the segregated, all-white nightclubs of a century ago that featured “pasteurized jazz.” “If our dead could speak,” Tracy K. Smith writes in a poem derived from a speech given by the first Black senator, Hiram Rhodes Revels, in 1870, “what a voice, like to the rushing of a mighty wind, would come up.”

Part of the book’s depth lies in the way it offers unexpected links between past and present. New Yorkers, for instance, have long protested that the city Police Department’s “stop and frisk” searches for contraband or guns disproportionally snag people of color. But how many had connected it, as Leslie Alexander and Michelle Alexander do here, to the slave patrols of the old South, in which groups of armed white men routinely barged into the cabins of enslaved men and women to hunt for stolen goods or “anything they judged could be used as a weapon”?

New & Noteworthy, From Food Policy to Communicating With the Dead

‘The Ratline: The Exalted Life and Mysterious Death of a Nazi Fugitive,’ by Philippe Sands: An Excerpt