HAVE I EVER TOLD YOU BLACK LIVES MATTER
Written by Shani Mahiri King
Illustrated by Bobby C. Martin Jr.

The week I wrote this review, Kamala Harris became the first woman, first African-American and first Asian-American to take the oath of office as vice president of the United States. At the same event, Amanda Gorman, the nation’s first National Youth Poet Laureate, dazzled the world with her inaugural poem. Roughly two weeks before that, Bianca Smith joined the Red Sox organization, becoming the first Black woman hired to coach professional baseball. There will be more firsts before the sun sets on this day, and already Black authors and illustrators across the country are dreaming up ways to get these new accomplishments down on the page.

But which breakthroughs should they include? No matter their choices, other equally worthy facts and personalities will have to be left out, and well-informed readers will call out sins of omission. Why include Augusta Savage but not Edmonia Lewis? Angela Davis but not Assata Shakur? Huey P. Newton but not Fred Hampton? These are never unreasonable questions, but a book can have only so many pages. Besides, the Black experience is so vast and multifaceted it can’t ever be contained within covers.

Shani Mahiri King (an associate director of the Center on Race and Race Relations at the University of Florida, where he is also a law professor) addresses this dilemma directly in “Have I Ever Told You Black Lives Matter,” choosing to focus on the “collective” power in “the breadth and richness” of 116 individuals. They embody an impressive range, from the early American revolutionary Crispus Attucks to up-to-the-minute figures such as Jay-Z and Chadwick Boseman.

“Have I Ever Told You” adopts a conversational approach. The author’s tone resembles that of a patient elder addressing an attentive youthful audience. The typography may be challenging for grandparents and hopelessly analog folks (like this reader) who look forward to sharing this work with loved ones. I suspect it won’t present such difficulties for digital natives and readers of more recent vintage. In contrast, the luminous color schemes will be accessible to everyone. The pages are wonderfully alive with electric hues. 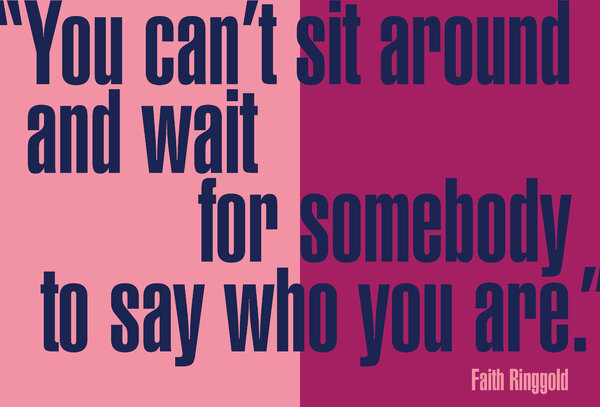 King excels when he avoids platitudes in favor of quotations that reveal some crucial aspect of a notable individual’s personality. I couldn’t stop smiling, for example, when I came across this nugget from Bessie Smith: “I don’t want no drummer. I set the tempo.”

Such taglines are where the illustrator, Bobby C. Martin Jr., really shines. It’s easy to visualize his imaginative blends of text (and sometimes images) emblazoned on posters and T-shirts. No doubt many of us have room in our lives for his dramatic rendering of this reminder from the great artist Faith Ringgold: “You can’t sit around and wait for somebody to say who you are.” I wasn’t aware of Martin’s work before now. (His design credits include the June 24, 2020, New York Times Magazine cover “What Is Owed” and the April 2018 special edition of The Atlantic honoring Martin Luther King Jr.) I’m grateful for the introduction and hope to see more.

The book’s narrative rhythms portray time as a river of swirling currents as opposed to points on a straight line. King’s long view of history connects the past strongly to the present, and vice versa. A mention of Colin Kaepernick expands to include Tommie Smith and John Carlos, Black athletes who bravely protested at the 1968 Olympics. A mention of Ida B. Wells sends us cascading through generations of journalists who have followed in her stead, including Charlayne Hunter-Gault and Yamiche Alcindor. In the world King has created, Jean Toomer occupies the same space as Jacqueline Woodson, and it’s but a small leap from Josephine Baker to Gregory Hines. At strategic intervals the narrator wisely reasserts — plainly — that Black lives matter.

In “The ABCs of Black History,” Rio Cortez (a Pushcart Prize-nominated poet) picks up a similar refrain. “Black lives matter,” she proclaims on the “M” page, emphasizing the word “matter.” “Every breath, every dream —/Every thought, each idea, each impossible scheme.” In rhyming couplets, she leads readers on a journey through Black life that acknowledges pain and struggle while building confidence with examples of triumph. It’s a tricky maneuver when writing for children, but Cortez pulls it off. There’s no condescending to her readers; she assumes they’ll be able to follow when she tells them, for instance, that “D is for diaspora.” Not surprisingly, her celebration of Blackness is worldwide, as in this nod to Caribbean carnival: “J is for J’ouvert, when the drummers drum-drum,/from Trinidad, Grenada and Haiti they come!”

Lauren Semmer’s illustrations are warm and friendly, rendering Black characters in a range of dynamic shades. In perhaps her best panorama, “G is for Go!” echoes Jacob Lawrence’s “Migration Series,” with the epic African-American journey from South to North spreading across two pages along a serpentine railroad track, on top of which stream passenger cars crammed with Black dreamers and strivers. Another strong sequence is simple, subtle and moving: Behind Cortez’s words “L is for love. L is always for love,” Semmer has placed portraits of the actor-activists Ossie Davis and Ruby Dee, the Stonewall activist Marsha P. Johnson, and Mildred and Richard Loving, among others.

Like “Have I Ever Told You,” “The ABCs of Black History” takes an imaginative view of time. Protest placards from earlier eras with messages such as “I Am a Man” and “Separate Is Not Equal” are placed alongside contemporary slogans such as “Hands Up Don’t Shoot” and “We Can’t Breathe.” On one particularly cool layout, Gwendolyn Brooks recites her poetry just inches from DJ Kool Herc, spinning jams on his wheels of steel. With such creativity at our disposal, Cortez and Semmer seem to suggest, full equality for African-Americans is not only possible but inevitable.

I am heartened by the daily scroll of parents and educators (not all of them Black!) proudly showing off on Instagram and Pinterest the libraries they’ve compiled for the young Black readers in their lives. Such posts should be required viewing for any employees of publishing companies who still dare to question whether sufficient readers exist for books with African-American themes. Publish volumes like these and they will surely come.

Jabari Asim’s books for children include “Preaching to the Chickens: The Story of Young John Lewis” and “A Child’s Introduction to African-American History.”

THE ABCS OF BLACK HISTORY
Written by Rio Cortez
Illustrated by Lauren Semmer
64 pp. Workman. $14.95.
(Ages 5 and up)

Toni Morrison, a Writer of Many Gifts Who Bent Language to Her Will